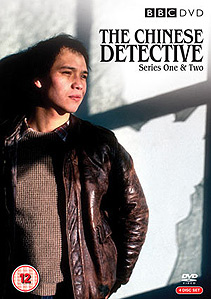 “Another Eighties classic television
series — The Chinese Detective is full
of period cars, clothes and nostalgia.
Just the thing for a walk down memory
lane...”

TONGUE-IN-CHEEK AND WELL LAID-BACK, The Chinese Detective also tackled serious issues about prejudice and corruption against a background of Eighties London. This gritty cop drama was not without its lighter moments and was ahead of its time, starring David Yip as the youthful Detective Sergeant John Ho.

Providing the first lead role for a Chinese actor on British television, The Chinese Detective was influenced by the internationally successful Charlie Chan detective films of the 1930s and 1940s. Set in the East End of London, the series ran on the BBC between 1981 and 1982 and was written by Ian Kennedy Martin, creator of The Sweeney (ITV, 1975-78).

The Chinese Detective deals with the usual crimes — murder, protection rackets, double-crossing ex-cons seeking retribution, drugs deals, embezzlement and shoplifting — while coping with prejudice from within the police force as well as from the criminals. "You know
I done my national service in Malaya shooting people who looked very much like you," he is told by Jack Bross (Alan Ford), who has recently been released from prison.

The maverick detective is prepared to use even the most unorthodox methods in order
to solve his cases, but things are now going well for him. John Ho's father Joe (Robert Lee) had his life destroyed when he was fitted up in a drugs case by a now-retired policeman, former Detective Chief Inspector Marley-Harris (Allan Surtees), and was sent to prison for six years.

Ho is seeking to avenge his father's disgrace and he goes to see Marley-Harris on the pretext of seeking local information, despite warnings from his father against it. He is also having girlfriend trouble with Mei, a nurse, played by Sarah Lam.

Ho sets villain against villain to uncover any evidence that will bring the guilty to justice. But his unconventional approach results in regular clashes with the intolerant Detective Chief Inspector Berwick (Derek Martin). The Chinese Detective tackles traditional police procedural storylines while dealing head-on with institutional racism within the police force and the prejudice displayed by those Ho encounters while doing his job. Forget political correctness — this is the Eighties!

The dark moody music matches the sombre settings in Eighties London and it is interesting to see how much everything has changed. The stake-outs are rather obvious and there are plenty of clichés such as pimps driving the inevitable white Mercedes.