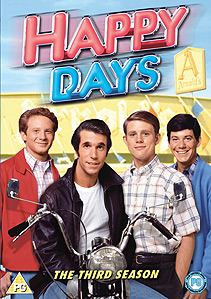 “Cooler than Cool, Arthur ‘The Fonz’
Fonzarelli (Henry Winkler) is the cult
hero of the classic television series
Happy Days — and the third season
is now available on DVD...”

THE SEASON THAT DEFINED THE SERIES HAPPY DAYS for its duration — the third season — had revamped sets and it was at this time that the fondly-remembered (by millions) intro sequence first appeared. Now available on DVD, this hilarious and very upbeat television series is a must for any collection. With its happy-go-lucky, relaxed attitude and Fifties period atmosphere Happy Days reflects on an era when teenagers were carefree and innocent and the pace of life was much slower.

When The Fonz's grandmother, Mrs Nussbaum (Lillian Bronson), moves from Florida to live near him, The Fonz lets her live in his flat while he moves in over the garage at the Cunningham's — his friend Richie (Ron Howard), sister Joanie (Erin Moran) and parents Marion (Marion Ross) and Howard (Tom Bosley) — and becomes one of the family.

Richie plays drums for a musical trio along with his friends from Jefferson High — Warren "Potsie" Webber (Anson Williams) and Ralph (Donny Most) and they meet regularly at a fast-food café owned by Arnold (Pat Morita), sometimes entertaining their peers.

The motorbike-mad, leather-jacketed king of cool ("Nobody understands cool except me and James Dean!") Fonzie is a car mechanic who never had a proper family — but he does have a comb for every day of the week, plenty of mirrors, a string of girlfriends and a 'little black book' that takes the form of three A4 folders! The Fonz leads where others aspire to follow.

Filmed before a live audience, Happy Days is just that — a wonderful, peaceful time full of fun and harmless pranks. Everything in the garden is rosy… Just as long as you manage to get the latest Fabian record and you don't — ever! — touch Fonzie's wheels!

The series includes an episode called Fearless Fonzarelli, where a white-suited-and-booted Fonz attempts an Evel Knievel-type stunt over 14 garbage cans, which features television presenter Jack Smith as himself. Another is set when Elvis joined the army and he is supposed to be on a train passing through Milwaukee — giving the local boys the chance to chat up The King's female fans; and another is about Joanie's infatuation with Potsie. There is also the episode Fonzie The Superstar, when he brashly volunteers to front Richie's band, only to be seized by a very un-cool case of stage fright before he has the chance to shine. Don't miss this brilliantly up-beat series.

A number of recording artistes contributed to the series, including Teresa Brewer, Ike Cole, Fats Domino, Connie Francis, Johnnie Ray and Kay Starr. Happy Days is Produced by Tony Marshall, created by Garry Marshall, Written by Mark Rothman and Lowell Ganz and Directed by Jerry Paris. The lyrics of the song Happy Days are by Normal Gimbel, Music by Charles Fox and the Music scored by Frank Comstock.

There are numerous one-liners: Richie's father says to an angry Fonz (who has just discovered who trashed his bike): "Shakespeare once said, To err is human; to forgive divine." Fonzie responds: I bet he never had a bike!