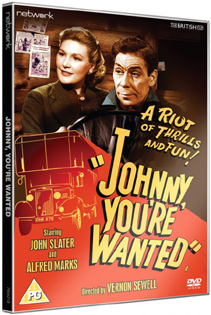 “A great little crime drama injected with
a healthy dose of humour, this is a
simple tale of a murder following a lorry
driver’s kind act in picking up a lady in
distress who then goes missing from his
cab and whom he finds lying dead at
the roadside, thus implicating him in the
killing in Johnny, You’re Wanted...”

TAGGED AS "A RIOT OF THRILLS AND FUN", the humorous and intriguing Johnny, You're Wanted is a compelling piece of film history simply told with a small, highly-watchable cast.

Johnny (Cockney character star John Slater: Z Cars; Passport to Pimlico) is driving his truck to London when an attractive woman suddenly steps out onto his headlights, flagging him down. He stops the lorry and at first is reluctant to give her a lift but she seems agitated, saying that her car has broken down and that she needs to get to London urgently.


He pulls into a diner to call his depot and have something to eat and drink, but the woman says she doesn't want to get out of the cab and when he finally returns to the lorry she is nowhere to be seen.

A short while down the road, Johnny is pulled over by a policeman and is aghast to discover that the woman is lying dead at the roadside. Having told the Police of his short involvement with the woman, he is asked to go to the Police Station to make a statement.

While there, a detective seems to make a big thing of Johnny's endorsements for speeding and the lack of a signature on his licence, leaving a laid-back Johnny bemused and irritated.

Johnny and a friend go to the Grand Theatre to see a psychic demonstration by Fred Balsamo (Garry Marsh), who is assisted by his niece Julia (Christine Halward), to whom Johnny is attracted. While there, he sees a photograph of the dead woman and becomes more involved with the Police investigation of both the murder and also in a plan to trap a drug smuggler. But will this affable character he be able to help solve these crimes?

Despite it's serious storyline, Johnny, You're Wanted is a jolly, intriguing and fun movie with John Slater perfect as the singing lorry driver with a strong sense of justice. Brilliant little vignettes abound verging on slapstick. John Slater is marvellous.

Music Composed and Conducted by Robert Sharples; Director of Photography is Basil Emmott; Screenplay by Michael Leighton and Frank Driscoll; Based on an original story by Maurice McLoughlin; Produced by George Maynard; and Directed by British B-movie stalwart Vernon Sewell (Ghost Ship; The Silver Fleet).

* Presented in a brand new transfer from original film elements in it's as-exhibited theatrical aspect ratio, Johnny, You're Wanted is released in the UK, courtesy of Network Distributing's The British Film collection, on DVD on 6 October 2014.

The British Film collection was launched by Network Distributing in April 2013 as part of a five-year plan to release over 450 vintage British films through a deal with Studiocanal, one of Europe's leading distribution and production companies. Many of the films have never previously been available to own.

"Despite the seriousness of the storyline, Johnny, You're Wanted is a jolly, intriguing and fun movie with John Slater perfect as the singing lorry driver with a strong sense of justice. Brilliant little vignettes abound verging on slapstick. John Slater is marvellous" — Maggie Woods