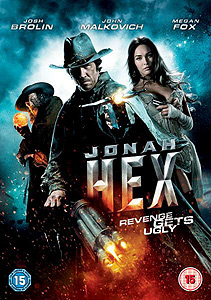 “A Western with a difference, Jonah Hex
has supernatural overtones that take
this DC comic-based story to new
heights with a fascinating anti-hero
out for revenge who talks to dead
people...”

BASED ON THE POPULAR DC COMIC-BOOK of the same name, Jonah Hex is a film to crow about. The film begins with bounty hunter Jonah (Academy Award-winner Josh Brolin: No Country For Old Men; Wall Street: Money Never Sleeps) turning the tables on a town where he has been double-crossed by the mayor and the sheriff. Teetering on the brink of sanity, Jonah is harbouring a festering sore of a grudge that demands justice.

During the American Civil War, Jonah and his men were ordered to burn a hospital by fanatical Confederate officer Quentin Turnbull (John Malkovich: Con Air; Changeling). When Jonah refused, Turnbull's son Jeb — his best friend — drew on him; and Jonah was forced to kill him. It was an act for which he would pay a terrible price.

The cold-blooded Turnbull denounced Jonah as a coward, a traitor and a murderer who betrayed his own men. He tracked down Jonah and tied him to a cross, forcing him to watch as his wife and child are killed. Then he branded Jonah's cheek and left him for dead.

Barely alive, Jonah is rescued by a Crow Indian Medicine Man who brings him back to some semblance of life that leaves him with the ability to speak to the dead. Riveting stuff here!

Hell-bent on revenge, the now badly-scarred Hex takes to roaming the country as a bounty hunter and becomes a wanted man with a price on his head. He is frustrated in his attempt to find the man who took his life away when he hears that Turnbull has died in a fire.

Meanwhile, a merciless and psychotic outlaw is out there; a terrorist using a very dangerous weapon of mass destruction and who is determined to get what he wants, regardless of the cost in innocent human lives. The army has been given an order that comes all the way down from President Grant himself, to find a special person to stop the bloodbath. The one man on whose shoulders the fate of the nation will rest: Jonah Hex.

They track down Hex to the town where he has found some kind of peace with an old friend, saloon girl Lilah (a very fetching Megan Fox: Transformers; Jennifer's Body) — the only person he can trust. Although Jonah at first refuses the army's deal that could see him given an unconditional pardon, there is one thing that will change his mind — the identity of the terrorist.

Josh Brolin broodily brings his character to life as the sexy, wildly resolute Jonah Hex while John Malkovich proves a worthy adversary as the sinister Quentin Turnbull in this exhilerating action Western. Megan Fox shows she isn't just a pretty face as Lilah aids Jonah in his fight to prevent Turnbull's brutal militia from unleashing hell on earth. Jonah Hex is unstoppable!

Described as "a unique darkly-comic portrayal of Civil War-torn Western America", Jonah Hex is a hotbed of excitement; a comic-book western magnificently brought to life with supernatural elements and an exceptional cast. Reaching into the blackness of hell to unearth a gripping battle between good and evil, the film is laden with stunning special effects, thrilling gunplay and a touch of dark humour, making it the perfect antidote to a cold winter evening.

With one of the year's most impressive casts and an arsenal of extra features, the hugely entertaining Western thriller Jonah Hex is released by Warner Home Video to sharp-shoot its way onto Blu-ray and DVD on 27 December 2010. Running Time: 81 Minutes | Certificate: 15 | RRP BD Multi-pack Ł22.99; EST Ł10.99; VOD Ł3.75.

"Jonah Hex is a hotbed of excitement; a comic-book western magnificently brought to life with supernatural elements and an exceptional cast" —Maggie Woods, MotorBar

"Plenty of bangs for your bucks" — Sky Movies