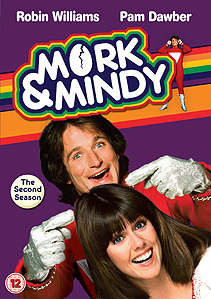 THE STORY GOES THAT the youthful Robin Williams went for an audition for the part of Mork from Ork for a fantasy episode of Happy Days (Mork & Mindy quickly followed). Asked to sit down, he immediately assumed the position for which Mork is famous — upside down — and he got the job.

The whacky alien from planet Ork lands in Boulder, Colorado, in a giant egg and inveigles his way into the life of Mindy (Pam Dawber). In this second season, Mork continues to struggle to understand Earth's customs — even though Mindy does her best to explain them! When he's not sitting upside down on chairs or greeting bewildered humans with his extraordinary greeting of "Nanu-Nanu", the crazy, scatterbrained and naďve Mork — dressed in the colourful clothes of a court jester — keeps the laughter coming with a series of non-stop slapstick episodes and endearingly innocent misunderstandings.

Among the fun episodes is one where Mork shrinks until he disappears and re-appears in
an Alice in Wonderland-style place run by an evil king where there are some familiar-looking faces — including a dead-ringer for Mindy called Mandy. Robert Donner appears in this episode as Exidor and there is the usual clowning around.

When Mork decides to inject some excitement into his relationship with Mindy in Stark Raving Mork, he discovers from landlord Mr Bickley (Tom Poston) that most people have fights and decides he could spice up their lives by picking a fight with Mindy — "Shazbot" indeed! A brother and sister working at The New York Deli, Remo DaVinci (Jay Thomas) and Jean (Gina Hecht) provide some advice and Remo tells Mork that fighting gets rid of frustrations. Having investigated rows, Mork tries them out on an unsuspecting Mindy with devastating results — what would you say if your lovingly-prepared meal ended up on the living room floor?!

Mork reports his findings back to Ork's representative Orson (Ralph James) and they analyse the human emotion, coming up with some very interesting reasoning! Throwing words instead of punches, says Mork, can be much more hurtful. Has this alien never
heard of sticks and stones?

Mork from Ork started his life with Robin Williams as a guest star in Happy Days and the hour-long episodes of Mork & Mindy Season 2 gave Robin Williams even longer to pursue the improvisational humour that established him as a leading comic early in his career. In one episode, Mork even decides to join the Air Force — Heaven help them!

Mork is moved to remark that traffic lights are so pretty that people stop their cars to watch them change and there are some very interesting observations — much like a less sophisticated Third Rock From The Sun — when Mork tries to get his head around the behaviour of humans. It makes for satisfying and entertaining viewing.

• Discover the second season of Mork & Mindy — the show that has made Robin Williams one of Hollywood's most celebrated stars — for yourself. It is available now on DVD (released 7 April, 2008).