Norm of the North: Keys to the Kingdom 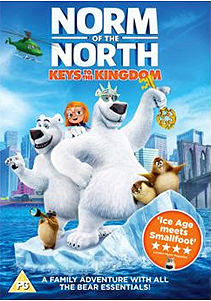 “The king of the Arctic and his family
and friends are back with the Polar Bear
being invited by his young human
friend to revisit New York, where he is
forced to clear his name when he
becomes America’s most wanted after
being accused of robbing a bank in
Chinatown; meanwhile, back at home
there is a fight to save his kingdom in
the enjoyable comedy animation Norm
of the North: Keys to the Kingdom...”

JUST ANOTHER DAY FOR NORM (voice of Andy Toth), the newly-crowned King of the North, takes a rapid turn for the worse when he excitedly returns to New York to visit his friend Olympia (Maya Kay) and her mother Vera (voice of Jennifer Cameron) and to receive the keys to the city from Mayor Freeman (voice of Brian Drummond).

Taking his son Quinn (voice of Cole Howard) and three cute loyal Lemmings to accompany him, Norm leaves the rest of his family in the Arctic, little knowing that he is about to be accused of being a bank robber in New York. As CCTV footage shows an adult polar bear stealing from the bank, Norm and his friends team up with wealthy bank owner Fong (this remarkable rabbit is voiced by Lee Tocker) to catch out whoever it is that is impersonating him.

Meanwhile, back in the Arctic Norm's brother Stan (Alan Marriott), an ace ice hockey player, is running the kingdom and has caused a huge problem for the animals that live in the North by making a deal with a scheming bottled-water company. The bid to stop the company intent on taking the ice results in a showdown ice hockey match with an opposing team that includes international star Benny Voulanov (voice of Brian Dobson).

Can Norm clear his good name in New York and get back to save his kingdom? Polar Bears, Caribou, Seals and Killer Whales unite — with help from intellectual advisor Seagull Socrates (Jonathan Holmes) — in the exciting, funny and well-observed animation feature Norm of the North: Keys to the Kingdom. Children will love Norm's antics and Norm learns some good lessons about leadership on the way.

Norm of the North: Keys to the Kingdom also features the voices of Maureen Jones as Mrs Lieberman; Lisa Durupt as Elizabeth, Maria and News Anchor; and Marco Soriano as Lawrence.

* Take to the ice with Norm and his friends in the latest full-length feature from our favourite Polar Bear as Norm of the North: Keys to the Kingdom is released in the UK on Digital Download on 11 February 2019 and on DVD on 18 February 2019. Certificate: PG | Running Time: 91 Minutes Approximately.