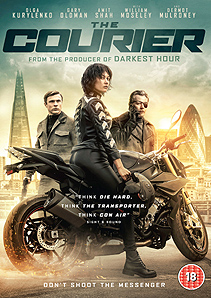 “As a cold-blooded crime lord waits
confidently in the United States for his
murder trial, a team headed by Interpol
moves the key witness to a safe house
in London, which is then compromised
after a mystery woman turns up
claiming to protect the man whose
evidence would see the killer
imprisoned in the fast-action thriller
The Courier...”

UNDER HOUSE ARREST AND AWAITING TRIAL for murder in Washington, DC, arrogant crime lord Ezekiel Mannings (menacingly played by the wonderfully-versatile Gary Oldman: The Dark Knight) doesn't appear too worried about the outcome as he has friends in high places and a loyal daughter Alys (Calli Taylor).

On the other side of the Atlantic in London, a vital witness is escorted to a safe house by a team of officers led by Interpol Agent Simmonds (Alicia Agneson: Vikings) to await a motorcycle courier with the equipment to effect a secure video link to the court in Washington.


A very nervous Nick Murch (Amit Shah: The Witcher; Final Score) had seen Mannings murder one of his own men but, as frightened as he is, he is still prepared to give evidence for the prosecution as long as he is protected in the joint FBI, NCA and Interpol operation.

However, the protection unit has been compromised and the courier (a highly watchable Olga Kurylenko) delivers the package without knowing it contains enough cyanide gas to wipe out the genuine officers and silence Nick permanently. Fate takes a hand and Nick is forced to take a leap of faith in order to survive.

The tough, resourceful courier is full of surprises and has to convince a panicking Nick that she will help him. Initially he does not trust her but, proving amazingly capable, she takes on the might of Mannings' doggedly cold-blooded thugs; putting her own life on the line in a locked-down multi-storey car park with no apparent means of escape.

With the judge in Washington agreeing a short suspension to sort out the lack of communication with the witness, time is ticking away as Manning's paid assassins hunt down the courier and Nick as they try to hide from them and find a way out before the trial is dismissed and Mannings once again evades justice.

Prepare for full-throttle thrills! Compelling, gritty and with heart-in-your-mouth tension, The Courier piles on the pace as the hunters close in for the kill and both sides suffer injuries from knives, bullets, and gory hand-to-hand combat.

* From the Producer of Darkest Hour, Signature Entertainment releases The Courier on Digital HD on 27 January 2020 and on DVD and Blu-ray in the UK on 3 February 2020.

"An unrelenting actioner" — The Hot Corn