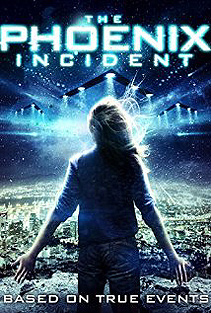 “Mixing fact with supposition and billed
as based on true events, The Phoenix
Incident is an intriguing and thought-
provoking film that allows you the draw
your own conclusions about alien visits
and abductions...”

HIGHLIGHTING UNSOLVED MISSING PERSON CASES in the United States and linking them to UFO sightings all over the world, The Phoenix Incident uses true events, blatant USAF cover ups and a little imagination to weave a feature around the disappearance of four young men in Phoenix, Arizona.

Using testimony from a USAF F-15 pilot from Luke Airforce Base, recovered military footage, eyewitness accounts and interviews with the friends and family of the four men who disappeared without trace, the film looks at the events surrounding one of the largest military cover-ups in United States history.

Following sightings of strange lights and UFOs in Damal, Turkey, 50km south of the Russian border; Dayr Az Zawr, Syria; Mogadishu, Somalia Ciudas del Carmen, Mexico. Chong Qing, The Republic of China — some of the 57 incidents reported across Asia, Europe and Russia — and sightings in the United States, 1997 is the year when the US military is rumoured to have begun fighting a covert war against forces of unknown origin.

For many years it has been rumoured that a crashed flying saucer and its alien pilot have been concealed at Area 51, the United States' top secret military base.

At the time strange lights were seen in formation over the desert and the USAF deployed F-15s to investigate. Known as 'The Phoenix Lights Incident', it was shrouded in secrecy, with top military figures refusing to disclose information.

When their ute hit a stone and stopped dead, Glenn, Mitch, Ryan and Jacob decided to go on foot to see if they could find out what the lights were, leaving Melissa with the vehicle. It was a fatal mistake as she never saw them again.

Walton Samuel Gayson (Michael Braithwaite), a loner with a history of violence, was arrested on suspicion of involvement with their disappearance but there was insufficient evidence to convict him. There was no trace of the boys.

The Phoenix Incident is a riveting foray into the world of UFOs as well as a fascinating reconstruction of what actually happened before four young men disappeared and a suggestion of what may have happened to them subsequently. Intriguing and thought-provoking. Is the truth really out there?

Written and directed by gaming veteran Keith Arem (Call of Duty: Black Ops; Titanfall) The Phoenix Incident chronicles the US military's alleged engagement with extraterrestrial forces on the well documented night of the Phoenix Lights.

Dedicated to the members of the intelligence community who provided the evidence to make the film possible, The Phoenix Incident also features: James Patrick Stewart as David Collins; Fife III as Himself; John McCain as Himself; Ryan Keating as Lt Col James Edwards; and Scot Ruggles as Lt S Jordan.

The well-matched Music is by John Paesano; Director of Photography is Brandon Cox; Produced by Keith Arem, Adam Lawson, Ash Sarohia and Fahad Enany; Written and Directed by Keith Arem. Filmed on location in Phoenix, Arizona.

* Based on true events, the UFO conspiracy thriller The Phoenix Incident is released in the UK by Signature Entertainment on Digital Download on 31 August 2015 and on DVD on 7 September 2015. Certificate: 15 | Running Time: 89 Minutes | Catalogue Number: SIG359.

"The Phoenix Incident is a riveting foray into the world of UFOs as well as a fascinating reconstruction of what actually happened before four young men disappeared and a suggestion of what may have happened to them subsequently. Intriguing and thought-provoking" — Maggie Woods, MotorBar