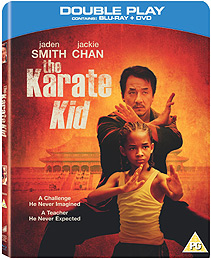 “Sometimes life can take strange paths
and a change that starts off in a
difficult  way can turn into a wonderful
discovery — as it does not only for
The Karate Kid when he and his mother
move to China, but also for a troubled
maintenance man...”

WHEN HIS MOTHER IS TRANSFERRED TO BEIJING, twelve-year-old Dre Parker (rising star Jaden Smith: The Pursuit of Happyness; The Day The Earth Stood Still) is reluctant to leave his many friends in Detroit, but he is soon to find that China can provide him with a learning curve that is invaluable.

Friendless and in a strange land, Dre meets the amiable Harry who persuades him to talk to the lovely Mei Ying, with whom he finds a mutual attraction. But cultural differences get in the way of their friendship and Dre also finds he has made an enemy of the class bully, Cheng.

China is the land of Kung Fu and Cheng is learning the art from Master Li, who teaches his charges the mantra "No Weakness; No Pain; No Mercy". When Cheng attacks Dre, the young American has no chance of protecting himself as he knows only a little karate and is badly beaten.

Gradually Dre and Mr Han begin to bond and the karate kid becomes accomplished at Kung Fu under the expert guidance of the maintenance man. Dre learns obedience, patience, serenity and respect and Mr Han is at last able to face his demons. But Dre still has to face a challenge: the Open Kung Fu Tournament that will take every ounce of courage he can muster to face the bullies.

Will Dre survive the challenge and will he be able to persuade Mei Ling's family that he is a worthy friend to their daughter? The box office smash The Karate Kid is an action-packed, feel-good family film about how perseverance leads to triumph. A very satisfying movie with a moral message; the lead roles brilliantly and poignantly acted by the inimitable Jackie Chan and the gifted young Jaden Smith.

"The Karate Kidů A very satisfying movie with a moral message; the lead roles brilliantly and poignantly acted by the inimitable Jackie Chan and the gifted young Jaden Smith" — Maggie Woods, MotorBar