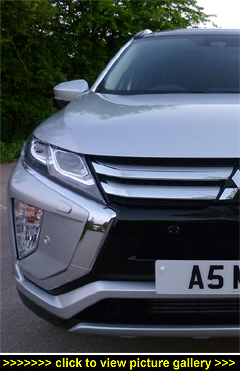 A KEY SELLING POINT will be the fact that, while available in less expensive front-wheel drive guise, the 'Cross' can also be had with proper four-wheel drive. Adding further to its appeal are its atttention-grabbing looks and distinctive 'fastback' glasshouse and tail treatment.

If you are contemplating parking an Eclipse Cross on your driveway you will probably, in Google-speak phraseology, have 'also searched for' the likes of Ford's Kuga, Honda's HR-V, the Kia Sportage, Nissan's Qashqai, the 3008 from Peugeot, Vauxhall's Grandland X, SEAT Ateca, Skoda Karoq, and the Vitara and S-Cross models from Suzuki — and not forgetting the Tiguan from VW. All desirable; and all undeniably good buys.

But, rightly or wrongly, it's the curves of a car's body that ultimately sells it — and the Eclipse Cross' SUV-coupé design definitely scores highly in the looks department — assuredly 'on-trend', its sporty stance and coupe-esque lines are underscored by a sharply-defined wedge-shaped beltline and strongly sculptured upper and lower side character lines.

The nose is fronted by Mitsubishi's signature 'protective shield' that's visually formed by the black central area and chrome accents, along with eye-catching LED lighting flanking a mesh upper grille plus muscular bumpers and wheelarches; the tail is distinguished by a full-width LED 'light bar'.

Finishing it all off is a special new red paint developed specifically for the 'Cross'. This uses an all-new chromatic painting process using a semi-transparent red coating incorporating mica flakes applied over several other layers before being covered by a final clear coating for a gleaming high-quality finish.

The Eclipse Cross landed in the UK in March powered by a new lightweight 160bhp, 1,499cc turboed petrol engine. More good news about the unleaded-drinking 1.5 — manual and auto transmissions are available: choose from a six-speed manual gearbox for FWD versions or, to have your gear changing done for you in both FWD and AWD variants, a CVT with an eight-speed Sport' mode. Joining the range later this year in an enhanced 2.2-litre DID four-cylinder turbodiesel exclusively available with an eight-speed automatic transmission.

This free-revving turboed direct-injection four-pot is a particularly peppy motor, not least because of the willing 184lb ft of torque that's on call from 1,800 through to 4,500rpm. Partnered with the CVT autobox it passes the 62mph post in 9.8 seconds from standstill; maximum speed is 124mph. Pootling around in uptight traffic the CVT can be left in its Auto mode to provide fluent and mannerly progress but there's always a keen response when your right foot presses down.

The Constantly Variable Transmission has a stepped eight-speed operation when in manual mode, so you can manage shifts yourself using the steering column-mounted paddle-shifters to maintain response by 'holding' the most appropriate of the eight 'gears' — something you may prefer for crisp overtaking manoeuvres or to maintain focus when pressing-on along serpentine B-roads.

As on the outside, so on the inside — the spacious cabin is smartly fitted out with shapely and well padded leather seats (both feature two-stage heating; the driver's is also power-adjustable) with body-hugging bolstering and a sociable gap between the front seats to prevent elbow clashes. A nicely padded wide central armrest is complemented by equally hospitable doors rests.

Up front you enjoy commanding SUV views with a full fist of headroom that lets you see the bonnet — accurately placing the 'Cross' couldn't be easier. Footwells are generous enough to let you drive in 'off-road' boots if that suits. Despite the split rear screen, bisected horizontally above and below by the 'light bar', the driver's views of following traffic are good.

Dead centre atop the fascia and crowning the architecturally tiered centre console that creates a twin-cockpit ambiance, is Mitsubishi's seven-inch touchscreen infotainment system (SDA: Smartphone-Link Display Audio) with plenty of apps. For those who can't be asked to stretch out a fingertip to the display there's a touchpad controller close to the selector lever so you can use the infotainments system easily without having to shift seating position. Audio volume, for instance, can be adjusted using two fingers to swipe the controller screen either up or down and audio functions such as the radio and iPod, as well as the Apple CarPlay, can also be operated using the touchpad.

Drivers not keen of tapping the touchscreen to adjust the heating and ventilation whilst driving will be delighted to discover that in the Eclipse Cross you don't have to — there are proper non-virtual controls for the two-zone climate on the centre stack.

Trim materials and fit and finish are upscale with a tasteful use of piano black inserts and an attractive mix of textures. The white-on-black dials are perfectly clear and the head-up display projects crucial information (for road speed, adaptive cruise control, forward collision mitigation, adjustable speed limiter, lane departure warning, shift indicator, along with seat belt and door ajar reminders) in the driver's field of view.

Smartphone mirroring is standard for Apple or Android mobiles although some may miss a fully-integrated SatNav system but you can get directions optimised for traffic conditions via your phone. Naturally you can also make and receive calls, access text messages and listen to music plus Android Auto can also provide voice controlled operation of Google Maps and Google Play music and other apps. A DAB radio with six speakers and Bluetooth are part of the package.

In-cabin storage is practical with big door bins that take big bottles (with room to spare), a decent-sized two-tier glovebox, deep storage under the front armrest with a convenient sliding top tray, and a pair of large siamesed cupholders.

There are four trim levels to choose from: '2', '3', '4', and First Edition versions; the Eclipse Cross '4' tested here has everything you need. Apart from numerous kit mentioned elsewhere, there are front, rear and side sensors and camera coverage including bird's-eye overhead views, a suite of active safety and driver-assist features such as Forward Collision Mitigation with auto city braking, Lane Departure Warning, Automatic headlamps with automatic dip/high-beam switching, rain-sensing wipers, seven airbags (with one for the driver's side knee, LED daytime running lights, Adaptive Cruise Control, Blind Spot Warning and Rear Cross Traffic Alert and the Eclipse Cross comes with a five-star Euro NCAP safety rating.

You can also take for granted keyless engine start, keyless entry and locking (both front doors), a three-spoke multifunction steering wheel, electric parking brake with auto hold function, power windows with one-shot op for the driver, powerfold door mirrors (on demand and automatically on locking and leaving), height-adjustable seatbelts, and a set of 225/55 18-inch alloys.

A well-considered hip-point and wide opening back doors make for hassle-free entry and exit to and from the rear cabin (incidentally, the doors are not too wide so no problems in car parks). Once aboard you sit several inches higher than those up front in well-contoured seats, so interesting views in all directions. Given the blatantly sloping roofline it would be logical to assume headroom in the back is restricted — but it's not.

Better yet, there's an abundance of stretch room for legs (up to six of them) and masses of foot room; elbows can chill out on a comfy central armrest with the obligatory built in cupholders. Not only that but the backrests offer plenty of recline settings and both sections of the 60:40 split rear seats can be slid backwards and forwards within 200mm to maximise lounging legroom.

The twin glass sunroofs — the front section power opens and both have blackout sunblinds — let in plenty of light, keeping the rear cabin as airy as the front. Unlike many cars, and thanks to the aerodynamics, 'real air' fans can drive the Eclipse Cross with its front windows fully open without being caught in a blustery crossfire. Bottle-holding door bins are another plus along with magazine pouches, overhead grab handles, and privacy glass.

Cruising in the Eclipse Cross' is refined; the petrol unit fades into the background, and the ride agreeably settled. The suspension set-up is 'soft' enough to keep passengers well isolated from potholes and poor grade blacktop while still being able to deliver on the handling front and tackle off-road conditions without rattling your teeth.

The 'Cross' sits atop a version of the platform underpinning Mitsubishi's next-size-up SUV, the Outlander. Rather than the more common (and cheaper) twist beam axle used by many of its rivals, it uses a multi-link rear suspension set-up. This means that each of the Eclipse Cross' rear wheels and suspension links adjusts individually to the road contours, minimising physical blowback into the bodyshell and cabin. Braking is up to scratch courtesy of hefty ventilated front discs back-up by disc at the rear.

With a blatant sports crossover persona and all-wheel drive you'll rightly expect your Eclipse Cross to handle well — and it does. The electromechanical power steering is fast and direct and turning into corners you can almost feel the four-wheel drive keeping everything shipshape and putting the power down precisely where it will ensure the most grip. Wet or dry, the 4WD-equipped Eclipse Cross feels reassuringly well balanced.

Four-wheel drive versions come with the latest version of Mitsubishi's S-AWC dynamic control system (Super All Wheel Control) with easily adjusted on the fly settings for Auto, Gravel, and Snow. S-AWC allocates the torque and braking force to each wheel to improve handling through corners, vehicle stability when driving straight or changing lane, and on low-friction surfaces, intelligently sending with a standard 80:20 front-to-rear torque split that can be instantly and continuously adjusted to a maximum of 55:45 front-to-rear in Auto mode.

Under normal circumstances, the 4WD default is Auto mode; if it encounters a low-friction surface or similar conditions it automatically sends more torque to the rear wheels for better stability. Snow mode is for not just snow-covered but any slippery surfaces, while Gravel mode delivers full all-wheel drive performance over difficult terrain, poor roads, or to extract the vehicle when stuck in mud or snow.

Off-road the Eclipse Cross' 183mm ground clearance and 400mm wading depth will extend your horizons, while an approach angle of 18.8-degrees, breakover angle of 18-degrees, and a departure angle of 29.6-degrees will also help keep you out of trouble.

Most SUV owners don't actually need a boot large enough to spend the night in and will find the Eclipse Cross' boot more than fit for purpose. Lift the tailgate and waiting for you will be 448 litres — plenty big enough for four-legged friends or real-world luggage.

If you don't need it all you can always slide the rear seats back further, reducing the boot size to a still useful 341 litres and at the same time handing your rear passengers some extra sprawl space. If you're not carrying (human cargo that is) you can fold the 60:40-split seats down to form a versatile 1,481-litre loadbay.

Additional stowage can be found below the boot floor in a wide, deep undertray. Another neat touch: the luggage roller blind can be stored away under the floor, which comes with a self-supporting stay. Of course, if it's more convenient to tow rather than stow, the 1.5-litre petrol engine will be happy to tow a braked 1,600kg. Last but not least, there's a rear wiper that, when not in use, is hidden beneath the roof lip spoiler.

With five doors and five seats, and sitting neatly between Mitsubishi's ASX and Outlander SUVs, the sporty mid-sized Eclipse Cross is the perfect size, has a roomy and comfy cabin, a lively petrol engine, a composed ride with sure-footed 4WD handling, plus a five-year warranty and is priced from just Ł21K. Convincing! ~ MotorBar