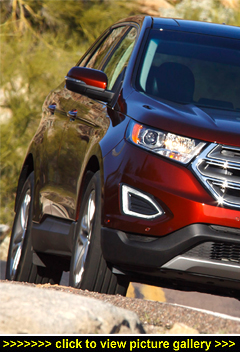 FORD IS FORTUNATE to now be a significant competitor in the SUV market and 2016 saw them launch their third SUV offering — the large five-door, five-seater Edge, which joins their mid-sized Kuga and compact EcoSport to give them coverage of all areas of the fast-growing SUV and Crossover market.

Under its previous 'One Ford' product strategy, where models from various global markets were made available to other markets, it gave us in Europe the Brazilian-designed but Indian-built EcoSport, the iconic American Mustang muscle car built in Europe, and the Canadian-built Edge — previously designed for the American market but now available elsewhere including Europe and Australia. In return Europe gave the World the new Focus RS plus, of course, other less hardcore bread-and-butter models.

Although four- and six-cylinder petrol powerplants are available in other markets, here in the UK you will only be able to buy a diesel because, for the moment in this large SUV market, it's diesel power that still rules.

However that might change as legislation to reduce, or even ban, diesel cars from major cities is more than just a rumour.

The Edge's two engine options are both 2.0-litre, four-cylinder turbodiesels: one with 177bhp and the other, reviewed here, with 207bhp. Which of the four spec levels — Zetec, Titanium, Sport or Vignale — you choose will also determine which engine is available.

Both have 4WD as standard but transmissions are different with the 177bhp unit getting a six-speed manual gearbox whilst the twin-turboed 207bhp version comes mated to a PowerShift six-speed dual-clutch automatic transmission with a Sport mode.

Despite its significant size (4,808mm length, 1,928mm width and 1,707mm height) all versions have only five seats. The boot holds an enormous 602 litres with the three rear seats in situ, but fold them down and this triples to a colossal 1,847-litres.

Prices start from a competitive Ł29,995 and go up to a less-convincing Ł40,280 for the 'posh' new Vignale level with the 207bhp engine and dual-clutch autobox. My test drive model was a 207bhp auto but in the popular Titanium spec and this weighed-in at an affordable (at least in this sector) Ł35,245. And, as usual, there is a wide range of personalisation options that will swell these prices.

Underpinning the Edge is the same platform as serves the Mondeo and S-Max ranges; in particular, the Edge's fascia panel and controls are similar to those found in the S-Max.

The top-of-the-tree Vignale, which only comes with the 207bhp engine and autobox, is that bit more luxurious with higher quality leather upholstery and trim around the dashboard, climate controlled front seats, active park assist, and LED adaptive headlights.

Ford is presenting the Edge to premium buyers as its European flagship range. And those customers will not only appreciate the comprehensive specification, but also its greatest asset — a very compliant and comfortable ride.

Due to its bulk the Edge is not as sharp handling or as agile as, say, a BMW X3 or Audi Q5, but its driving refinement, comfortable ride and large, supportively comfy seats will be appreciated by most people as too will the plentiful rear seat legroom. Its Active Noise Control system uses sound waves to cancel out the frequency of road and diesel engine noise — and it works well.

There is no getting away from the fact that the Edge is a large vehicle and it fills the road on winding country lanes; it just about fits — snugly — into in-town parking spaces. Thankfully the parking aid and sensors help as the rear and side visibility is not that brilliant.

From the outside the Edge is imposing; it looks bulky with its high waistline but the sculptured door panels and rear roof spoiler between them endow it with a rather athletic look. At the front is a high-level clamshell bonnet above a large, strong-looking grille flanked by sleek headlights. The high ground clearance and front and rear underbody scuff plates hint at its off-road nature.

The Edge's intelligent four-wheel drive system is of the automatic on-demand kind with driving torque moving between the front and rear axles as acceleration and grip demands. But there is no low ratio facility, descent control or differential locks so in reality, despite its bulk, it should be considered more of a lightweight off-roader able to cope with gravel or muddy tracks.

However, for many owners that won't matter because it is more at home coping with bad on-road driving conditions, its suspension easily shrugging off impacts from potholes. The 4WD system combined with its strong engine also makes it a useful towing vehicle with a braked towing capacity of 2,200kg.

When it comes to the choice of engines my colleague recently spent some time driving the 177bhp TDCi engine with its manual gearbox. His view was that this unit is a bit underpowered and lacking in response for acceleration from standstill, and required constant gearchanges on country roads between fourth and fifth.

It also has to work quite hard and that was reflected in the fuel economy: officially this less powerful diesel should return 47.9mpg in the Combined Cycle, but overall his test drive figure was 38mpg with CO2 emissions of 152g/km.

Whereas my 207bhp Edge had 36lb ft more torque at 331lb ft, making it more responsive with the auto gearbox, and its official Combined Cycle fuel economy is 48.7mpg although in real-life it returned 39.3mpg. The CO2 emissions are also slightly lower, at 149g/km — so road tax is Ł145 as opposed to Ł185 for the 177bhp engine.

The larger engine is also marginally quicker with a top speed of 131mph and zero to 62mph taking 9.4 seconds. The downside, of course, is that the larger engine with its standard fit autobox is Ł2,250 more expensive to buy than the 177bhp manual.

The Edge may not have initially been designed for the European markets but with the changes to the suspension, tuned steering and careful selection of the specification levels it gives Ford a competitive, must-have presence in the large SUV market.

There are lots of things to like about the Edge: imposing road presence in terms of size, very roomy interior, huge boot, very comfortable and compliant ride, strong engine matched with a slick automatic gearbox, well equipped, and well-priced in its sector.

And not much to moan about either (no seven seat option and not a generous mileage limit from the warranty). That noted, in most cases it's cheaper to buy than the comparable sized offerings from Audi, BMW, Land Rover and Mercedes. ~ David Miles