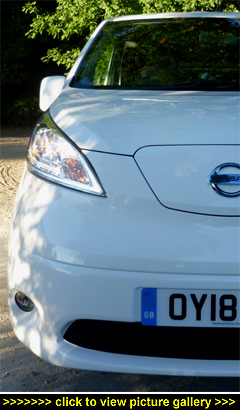 “Looking for seven seats and all-
electric power but can’t stretch
to a Tesla Model X? Help is at hand
in the shape of Nissan’s e-NV200
Combi...”

A PURE-ELECTRIC SEVEN-SEATER people-carrier, it will appeal to zero-emission-loving families who don't have Ł80K to spend on a Model X. Upsides include no 'dirty' combustion engine partnerships and a smooth-shifting autobox to make light work of congested roads, plus the ability to glide along as soundlessly as an owl on the prowl.

And don't forget that as an electric family vehicle, the e-NV200 Combi qualifies for a Ł4,500 government grant discount (by comparison the most you can get off with a plug-in hybrid is just Ł2,500), plus you won't need to pay the London Congestion Charge which for somebody driving into the congestion zone five days a week, every week of the year, means a substantial annual saving of over Ł2,500.

Installed in the e-NV200's engine bay is the same electric unit as propels Nissan's EV family hatch, the Leaf. That means a 40kWh motor, one that generates 107bhp and a gutsy 187lb ft of torque from the get-go (unlike a conventional engine, electric motors serve up maximum torque instantly as they don't need to spool up the revs to reach their peak power).

The e-NV200 doesn't hang about either with 0-62mph ticked off in 8.7 seconds. Top speed is 76mph and the range is between 124 and 187 miles, with the top figure more likely in the city where all that stop-starting works in its favour. CO2 emissions are, of course, a big fat zero.

On the move, the e-NV200's range can be maximised by pressing the 'Eco' button to stop you splurging on power without putting a crimp in your ability to nip through traffic in town.

Other driving modes are Drive, Braking, and non-Eco; B (for regenerative braking) is handy in cityscapes to top up the battery pack and extend the range between 'grid' charges, as well as to call up some engine braking when descending steep hills. Selecting Braking mode is easy — just flick the gear lever sideways to toggle between D and B.

There are now over 13,000 charging stations (including over 1,300 rapid Chargers) around the UK and at motorway services, IKEA stores and Nissan dealers, so 'range anxiety' is no longer to be feared and pure-EV drivers can relax about tackling longer trips. However, for the many, who never drive more than 60 or so miles in a day or whose daily commute round-trips come in under 120 miles, EVs such as the e-NV200 could genuinely mean never again buying fossil fuels.

Juicing up the lithium ion battery is a no-brainer — pop the flap between the headlights and you'll find two sockets: one for domestic 3-pin charging; the other for a fast-charger. Doing it yourself at home will see the battery pack fully charged in anything between four to twelve hours (we achieved a near-depleted 10-mile range to a near-full 160-mile range, on average in six to seven hours). Rapid charging, either at home if you've had a high-output charging point installed or at a public charge point or motorway services, should take between forty and sixty minutes to top up to 80%+.

Before driving the e-NV200 you might think — legal constraints aside — that a top speed of 76mph is not going to be enough; but actually it is. A decent punch of always available instant torque ensures no problems keeping up with the flow of traffic, however quick it's moving. That noted, one of its most agreeable characteristics is not the instant hit of power every time you press down hard on the accelerator but just how quiet and smooth it is to drive.

With its sloping nose and streamlined headlight units integrated between the sides of the bonnet and the tops of the wings and tall clean sides it might look like one of Japan's 200mph bullet trains but inside a friendly high-tech dash and commanding seating position is what awaits you.

Even though you sit high there's still a fist of air between your crown and the roof. The fabric-upholstered seats are well shaped, and made more welcoming by two-stage heating, and they proved to be comfortable on long haul journeys while the wide gap between the front seats ensures no impolite elbow clashes.

Along with a first-rate driving position the driver gets a clear digital instrument panel with a central one-dial-shows-all that among other things has an easy to see digital road speed readout along with battery info and, crucially, the driving range.

They also get a multifunction steering wheel (it only adjusts for height but that's perfectly okay) that alongside switches for cruise, speed limiter, telephone, and media also has a dedicated button that calls up the remaining driving range as well as showing nearby charging stations on the navigation screen which can then, should you wish, be finger-tapped to take you there.

Horizontally level with the instrument panel and set in the centre of the fascia is a touchscreen infotainment display that includes SatNav; also provided is Bluetooth, a CD slot, USB and Aux ports, with smartphone connectivity so you can enjoy all your news and entertainment and stay connected while you drive.

In-cabin storage includes a deep glovebox, cupholders incorporated into each end of the dash, a bag hook in the front passenger's footwell, an open tray between driver and passenger with an expanding fold-open storage section with another pair of smaller cupholders plus under-seat storage drawers.

Entry to the middle-row couldn't be any easier thanks to large sliding side rear doors which also, once either outer seat backrest is folded down, ensures quick access to the equal-sized sixth and seventh seats. Adjustable backrests on the 60:40-split centre bench improve comfort while there are pop-up picnic trays and mesh pouches on the backs of the front seats as well as cupholders built into the leading edges of the sliding doors.

With a flat floor there's plenty of room for feet to match the decent leg and knee room, and double the fist of headroom you enjoy in the front! Views forward through the windscreen are clear enough for people-watching; the side windows are sliding glass rectangular 'portholes' that work just fine.

Seats six and seven are set at a proper height off the floor so your knees don't end up under your chin. With adjustable backrests, they're very civilised — as too are their dedicated pop-out cupholders.

On the move the e-NV200 handles as confidently as the type of buyers choosing a seven-seater MPV would expect. With its seamless and refined power delivery it can be punted along safely; and as with most things designed to regularly manage heavy loads (and seven bodies can indeed be heavy), it feels agreeably settled carrying more than a token two, with bumps and potholes met with consistent comfort and no shocks. It's stable on the straights and when taking corners body control is well managed for what is a tallish vehicle.

Based on Nissan's electric van, there's acres of space inside the e-NV200, particularly at the rear. The wide tailgate is huge and big enough to camp out under, and will be much appreciated on wet days. Courtesy of a low lip the cargo bay is supremely easy to load.

With just the driver and front passenger on board and the third-row seats folded up and the middle-row seats folded and tumbled there's a humongous 2,940 litres for cargo. A better idea of what that means is that three adult bicycles, with their front wheels still attached, can be transported easily and securely.

Even with five seats in use there's a huge 2,110 litres available. And with all seven seats occupied you can still carry 443 litres below the luggage cover or 870 litres stacked to the roof! Extra versatility comes in the form of a flat-folding front passenger seat for those tricksy extra-long loads (up to a maximum of 2.8 metres).

You won't find another all-electric car that offers the same seven-seater mix of interior space and loadability as the e-NV200. Of course, if you only need five seats and an average family boot you could still be über-clean in an equally silent-running Nissan — the Leaf. It's your life; you choose. ~ MotorBar