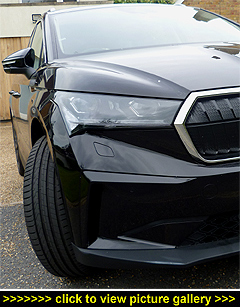 “All-electric SUV: Check. Real-world
range: Check. All the space you
need: Check. Easy to drive and live
with: Check. Throw in a tech-rich
cabin and Skoda’s stylish new Enyaq
iV ticks all the boxes...”

THE CLOCK IS TICKING down to when electric cars will be the only kind you will be able to buy. And as it does so, EVs are finally starting to do all the essential things they must for when drivers eventually have no other choices. Topping the list of these must-have qualities is the R-word — Range. No worries with the Enyaq, which covers 331 miles on a full charge of the 'green juice'.

The second crucial question is: Exactly how long does a full charge take? Plugged in to a 50kW rapid charger, the Enyaq 80 model's 82kWh battery needs 69 minutes to charge from 10 to 80 per cent. However, spend an extra Ł400 on the optional 125kW charging system and you shrink that charge time to just 38 minutes.

The other good news is that all-electric cars are a great deal more straightforward (think Scalextric!) than hybrid powertrains that mix and match electric with a combustion engine. The Enyaq employs a rear-mounted electric motor to deliver rear-wheel drive. Two battery sizes are available: we've been zipping around in the more powerful 82kWh version with its reassuring 331-mile range (the Enyaq 60 models use a 62kWh powertrain that deliver a 256-mile range).

With its angular-shaped headlights, striking blanked-off grille, sculptured bonnet and sharply raked A-pillars the Enyaq looks purposeful and dramatic. Climb aboard and its cabin quickly works its magic. The Cognac brown leather-clad seats (with classy white piping) are sportily shaped with light but effective bolstering and are supportive in all the right places. The driver benefits from full power seat adjustment including lumbar and also gets a three-memory recall.

The leather-wrapped, flat-bottomed, multifunction steering wheel feels especially good in your hands (so it should: it's heated and features tactile perforated work areas) while the high-riding driving position is as commanding as in any other large SUV and provides a sweeping view of the road ahead; you know right away that placing this beastie is going to be a stroll in the park.

There's a stylish sweep to the 'stepped' two-tone brown-and-black dash and the attention-grabbing 13-inch touchscreen sited dead centre looks the biz. The optional panoramic sunroof (with a large tilt-and-slide front section and all one-touch op) is worth every penny and floods the cabin with light as well as providing a taste of fresh air whenever you fancy. In addition to all of that there's masses of headroom and loads of space between the driver and front passenger.

The supporting trim — classy piano black decor and upscale cognac-piped floor mats — all looks tastefully swish. Big is beautiful, so they say. And when it comes to infotainment touchscreens that's true, ensuring as it does that everything you need to see can be taken in at a glance. Set high on the dashboard, the large display fronting the Enyaq's infotainment and navigation systems is truly a sight for sore eyes. Whatever information is showing — map, radio, CarPlay or anything else — it's all beautifully sharp and easy to read.

An irritating problem with touchscreens is trying to tap the exact spot with your fingertip when you're driving along. Skoda has solved this by positioning the Enyaq's touchscreen so that your left wrist can easily rest on the dash ridge along its base, thus making it easy to keep your fingertip and screen in sync. It works perfectly. Plus the screen is sensitive to your approaching finger and reacts pro-actively, which also makes hitting the right spot every time a given.

An eight-speaker audio set-up is fitted along with a DAB digital radio, Bluetooth, Skoda Connect with Infotainment Online and Remote Services, eCall Emergency Assistance, USB-C ports, a WiFi hotspot (in-car WiFi for up to 8 devices), plus wireless Smartlink for smartphone connectivity via Apple CarPlay and Android Auto.

Although many drivers miss the traditional physical heating and ventilation switchgear, the Enyaq's 2-zone climate control system's settings are permanently on show in a band across the bottom of the screen, offering an instant readout and easy adjustment on the move. And if you like the sound of your own voice, then you'll love the fact that there's voice control of the temperature (as well as the navigation, phone, and audio). There's also a strip of easily reached piano-style switches along the central edge of the dash for the Drive Select, heated screens, hazard lights, etc.

Directly ahead of the driver sits a Virtual Cockpit digital screen that displays active driving info: road speed, posted speed limit, range, adaptive cruise control, and navigation prompts. It's minimalist and foolproof with everything you need to know and nothing you don't, and keeps you up to speed with critical data in one easy-to-focus-on readout.

Equally impressive is the head-up display that also shows your speed, the posted limit and road signs, and navigation prompts along with a distance countdown and the upcoming road name. Another big 'plus': you can select white figures for normal use or blue for when there's snow!

Also incredibly useful: orange chevrons are projected onto the screen either side of the head-up area to double-down on the SatNav's spoken directions, reminding you about your upcoming left or right turn. Not only has the Enyaq got your back; it's also got your front!

Additionally you'll find some of Skoda's famous 'clever touches' such as an umbrella holstered in the driver's door, ice-scraper in the tailgate, and parking ticket holder on the driver's A-pillar. There is also plenty of in-cabin storage including useful twin smartphone slots angled at 45-degrees for ease of use, deep trays, very long, lined, bottle-holding door bins, and a generous bin under the height-adjustable armrest between the front seats, as well as a clever 'basement' tray running beneath the central tunnel that's accessible from both the driver's and passenger's side.

The Enyaq epitomises Skoda's well-earned rep for making family-friendly cars — it's a large, practical family SUV offering generous accommodation both front and rear that will make family trips a pleasure. Measuring 4.65-metres nose to tail, it provides plenty of room in the back. The supportive and nicely sculpted rear seats are decidedly comfortable while the flat floor allows three sets of feet to rest easy; if you need to carry three side-by-side, it's all very amicable.

Legroom is abundant too (leg-stretching is on the menu) and your rear passengers will not only benefit from the soothingly quiet and delightfully airy ambiance, but they'll also be sure to appreciate the fist-and-a-half of air between the roof and the tops of their heads. Making it even nicer are central air vents, individual smartphone pockets on the front seatback pouches along with bottle-holding door bins and a wide, drop-down centre armrest with pop-out cupholders.

Fitting 21-inch alloys to most cars will at best firm up, and at worst degrade, the ride quality. But despite our Enyaq iV rolling on a set of them instead of the standard-fit 19-inchers, its suspension coped admirably, taking it all in its easy-going stride — even poor blacktop didn't cause those aboard any aggravation getting around urban landscapes. Out on major roads, the Enyaq favours you and your passengers with a fluent ride enhanced by the Drive Select's Comfort mode.

A child could do it — driving the all-electric Enyaq, that is. Really. Basically you just jump in, foot on the brake, flick the selector to Drive, squeeze your right foot down… and you're away. A thousand times easier than mastering that first smartphone! Better still there's no 'bedding in' period — the controls and pedals are all nicely modulated and made for fluently effortless driving from the very first time you settle behind the wheel.

With an eager zero to sixty-two time of 8.2 seconds the Enyaq would seem to prioritise performance over comfort. Mind you, there is a hefty 201bhp on tap, backed by 229lb ft of torque. Press the pedal to the metal and the acceleration is satisfyingly strong and linear — very reassuring when you need to overtake. Equally reassuring is that, unlike some EVs, the Enyaq's power hit is nicely 'cushioned' and progressive, so the chassis always feels that it's singing from the same hymn sheet as the powertrain.

Don't be fooled by the paddles on the steering wheel — they are not, as you might reasonably expect, for changing gears; but for increasing or decreasing the degree of brake regeneration whenever you lift-off the accelerator. You can, if you prefer, drive everywhere in 'B' to help keep the battery pack topped up as it works just like Drive only with the 'regen' bit.

While it gets off the line at a decent lick, the Enyaq uses its power more prudently than some rivals — rather than using its instantly available power to launch you at the horizon, it serves up satisfyingly restrained and unruffled progress whether you're frequently stop-starting in traffic or navigating the school run.

The battery pack tips the Enyaq's kerbweight over two tonnes, but dynamically that's not a problem because it's fitted deep down to lower the car's centre of gravity. Add in decent body control and progressive, nicely judged, well-weighted steering and you'll appreciate the well-mannered drive the Enyaq serves up even when pressing on along twisting roads.

Skoda's Dynamic Chassis Control system with adaptive dampers is optional but the 'standard springs' set-up is spot-on and the Enyaq feels well-planted on the road. Up the speed and it feels satisfyingly surefooted at 70mph on motorways, where it delivers sweet-spot cruising.

Some EV brakes can be rather abrupt (blame their dual function requirements: braking while simultaneously capturing energy). No problem with the Enyaq's though, which are well fettled and do the job very efficiently without you really noticing — exactly as it should be. And you always have a choice of driving modes: Drive Select offers you Eco, Comfort, Normal, Sport (splendidly eager!), and Individual.

Send the tailgate skywards and you'll find yourself looking into a cavernous boot — at 585 litres it's one of the largest EV boots out there and a hard-to-beat USP for owners intending to use their Enyaq for carrying their whole tribe along with all their luggage to a staycation destination. The capacity is doubly impressive given that an electric motor lives under the floor. Also welcome is the full-size ski-hatch, and the luggage cover roller blind slides and releases easily.

Don't wander off; there's more to come. Drop the 40:60-split backrests and you'll open up a 1,710-litre loadbay, albeit with a step-up from the boot floor to the folded seatbacks. Where you leave your charging cable is entirely up to you but there is a dedicated cubby for two leads (one domestic; one fast-charge) beneath the boot floor. There are also sturdy bag-hooks and side compartments for odds and ends. Should you need to carry stuff on the roof you can, with the bonus that the roof rails are finished in chrome to match the window surrounds. But can you tow? Sure you can — up to a braked 1,200kg.

For drivers holding fire on committing to an all-electric family car, the Enyaq iV is likely to be 'the one' that persuades them to take the leap. With its plush interior, Skoda's roomy, all-electric SUV is very convincing and made even better by its fast charging and dependable and reassuringly long-distance range. As an EV that slots effortlessly in to even the most demanding of family lives, it's got our vote! ~ MotorBar