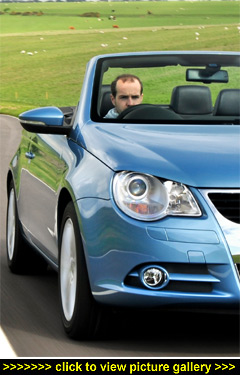 “Given the UK’s wetter and colder
Winters and hotter and dryer
Summers, more and more motorists
are likely to consider changing to
a car suitable for all seasons.
Something like the frugal Volkswagen
Eos BlueMotion...”

EVEN THOUGH IT IS NOT NEW IN DESIGN (it's now four years old), with its two-door, coupe style, four-seater family-sized body, the Eos still looks a classy but practical offering. And now the range has been brought up to date to meet the current market requirements, with the addition of low 144g/km CO2 emission BlueMotion versions.

The Eos UK prices start at Ł20,695 and run up to Ł29,935. BlueMotion versions in S and SE trim share the award-winning 1.4-litre TSI 120bhp turbocharged petrol engine with six-speed manual transmissions and are priced at Ł20,695 for the S and Ł21,795 for the SE. Road tax costs a frugal Ł125 a year and company car drivers will pay a reasonable 17% Benefit-in-Kind tax. For the record, all Volkswagen passenger cars sold in the UK are offered with a three-year/30,000-mile servicing package for just Ł250 — another welcome cost-cutter.

Other engine options for the range are a 157bhp 1.4-litre TSI supercharged-and-turboed petrol unit, a 207bhp 2.0-litre TSI and a 138bhp 2.0-litre TDI turbodiesel. A six-speed manual gearbox is standard for all engines while the 207bhp petrol and 138bhp TDI are offered with VW's famed DSG twin-clutch, fast-shift auto transmission. Depending on the engine option chosen, there are S, SE, Sport and Individual levels of trim and specification.

The UK is the third largest international sales market for Eos behind Germany and the USA and last year around 1,800 of them attracted UK buyers; 36% of them fleet purchasers. Fifty-four per cent of all Eos models sold in the UK had the diesel engine.

But that was before engine downsizing really started to happen and cash and tax strapped Britons really started looking hard at their motoring budgets, hence the introduction of the BlueMotion versions.

All models feature the unique five-piece folding metal hard-top roof which also incorporates a glass sunroof — an impressive piece of engineering that takes 25 seconds to open or close. Also fitted as standard to all models are an electronic stability programme, twin front and side airbags, semi-automatic air conditioning, fog lights, electric windows, heated and electrically-adjustable door mirrors, stereo radio and CD player, 16-inch alloy wheels, parking sensors and lockable load-through provision between the boot and rear seats. Naturally the specification gets more sophisticated the more you pay, and there is a wide choice of extra-cost options.

Now the main reason for combating all winds and weathers with a hard-top rather than the traditional fabric roof is to cheat our ever-changing British climate. There is nothing worse in Winter than getting into a car with a frozen-on-the-inside fabric roof and if it's not freezing then the relentless sound of heavy rain can dampen anybody's spirits. The folding metal hard-top does away with all this and makes the car snug when it's cold and wet and airy and light when it's dry — and it brightens our day when the roof is down and the sun is shining. Just as important is the fact that the car is secure when parked and left with the roof up, so no issues of vandalism or theft.

On the issue of luggage space, there is a maximum of 380 litres available with the Eos's roof up but this shrinks to just 205 litres when it is stowed in the load area, and that is really not enough for a four-seater.

The shroud, or inner boot liner, which shields the luggage when the roof is lowered does not allow for the easy loading of shopping.

As for the added weight, which includes bodyshell strengthening to limit the body-shake which can occur over poor road surfaces, there used to be a penalty to pay in terms of fuel economy and poorer performance but modern engines have largely overcome that issue.

A good example of this is the brilliant 1.4-litre TSI, four-cylinder, turbocharged petrol engine which powered my Eos SE BlueMotion test car. A few years ago a car of this size and weight would have been fitted with at least a 1.8 or 2.0-litre engine.

Today's technology means that much smaller capacity engines can be used and, remarkably, they produce more power and torque plus better fuel economy and hence less CO2 emissions. The 1.4-litre unit is high-pressure direct-injection petrol boosted by a turbocharger to give 120bhp but, more importantly, 148lb ft of torque from 1,500rpm.

The relatively high compression ratio means 'taller' gear ratios can be used to further improve fuel economy and in this case without losing any loss of responsiveness at lower speeds during acceleration. Top speed is 122mph with zero to 62mph taking 10.9 seconds.

The official Combined Cycle fuel consumption is 45.6mpg and during my test the Eos returned a real-life 42.7mpg — brilliant for a petrol engine. Worth noting; I found driving with the roof down reduced the fuel economy by about 3mpg due to the disturbed airflow. Exhaust emissions of 144g/km means road tax is an affordable Ł125 a year.

BlueMotion technology features an automatic Start/Stop system allied to a battery regeneration system that captures the energy otherwise lost during braking. This energy is then used for other functions — such as the electronic power steering — and it also allows for the alternator to switch off which reduces engine load. A useful hill-hold function, on-board computer (which includes a visual gear change point recommendation) and 17-inch alloy wheels shod with self-sealing tyres are all also BlueMotion tweaks.

The Eos 1.4 BlueMotion is particularly suited to either older retail buyers without the need for a family car and who appreciate a stylish design suitable for all winds and weathers which is very comfortable, easy to drive and well built.

Also, company car users will like the low 17% Benefit-in-Kind tax — the lowest in the range by quite a long way and even better than the diesel models.

The Eos in this BlueMotion guise more than competes on price against the Vauxhall Astra CC TwinTop, the Ford Focus Coupe Cabrio, the new Renault Megane CC and the Peugeot 308CC — plus the VW has the lowest road and BIK taxes as well.

Admittedly there's limited luggage space roof up or down for a coupe of this size but then it is nicer to drive than the others and it feels better built too. Plus the BlueMotion technology really does work for fuel and tax savings. All-in-all, the Eos makes a stylish and classy car for all seasons, it's smooth and enjoyable to drive and possesses that other essential for any convertible or cabrio: a quick roof. — David Miles