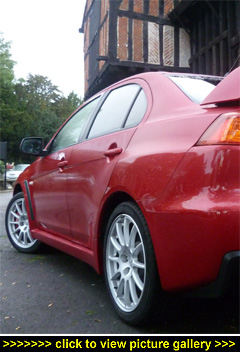 “Non-petrolheads might dismiss
it as being as mad as a hatter, but
for oil-in-their-veins enthusiasts
Mitsubishi’s Evo X is a driver’s car
par excellence — the giant-killing
Big Bad Wolf himself...”

IT'S STATING THE OBVIOUS to say that all previous Evos have been riotously, impolitely fast, devouring tarmac with adrenaline-pumping ferocity — but what gives this FQ-330 SST its eXtra appeal is its DSG-style twin-clutch Sport Shift Transmission.

While the FQ-330 is not the most potent Evo X to ever hit the mean streets, it still dishes out a punishingly eager 329bhp. Take our word for it when we say the 330 is more than quick enough: it scorches off the line to 62mph in 4.4 seconds and rockets on to 155mph. With this and 322lb ft of torque on tap, brutal overtaking punch is a given.

For a car capable of giving supercars nightmares, the Evo X certainly looks the part with its vented bonnet, gaping all-black mesh grille, bazooka-sized tailpipes and massive in-you-face bootlid spoiler. Seeing an Evo's aggressive snout closing fast in your rear-view mirror can be as shocking as seeing a T-Rex back there.

Getting down to business, the SST gearbox hasn't compromised the traditionally manic Evo power delivery — but what you get with this twin-clutch 'box is a smooth, positive and easily exploitable road-legal rally car that's equally nonplussed whether it's ramping it up across country or dawdling around Dullsville.

Stamp your right foot to stampede the 329 horses corralled under the aluminium bonnet and the only penalty will be how often you need to refill the tank (apart, of course, from the obvious: explaining to the judge why you were having problems taking off!).

The Evo's twin-clutch 'box makes a lot of sense in a hard-charger like the Evo. Fluent changes can be made in fully automatic mode or manually — by nudging the selector lever (the shapely leather-wrapped gearknob feels great in your palm) to-and-fro in manual mode or fingertip-shifting using the cool, magnesium paddles behind the wheel that synch you mechanically to the Big Bad Wolf.

Three driving modes are always on offer: Normal, Sport, and Super Sport. Normal keeps things laid-back, with smooth, low-rev-threshold shifts; Sport keeps the engine on the boil for a sharper response to your right foot as well as stronger engine braking, and shifts are crisper; and S-Sport hits the Evo's sweet spot — lightning fast, red-blooded, red-line upshifts while keeping the revs above 4,500 for maximum response and control on the track.

Shifts in either direction are slick, and delivered in a flash; finger-tap down two gears at motorway speeds and the sound of 329 rampant stallions being let loose sets your pulse going, as does the needle as it tears around the rev-counter — as if determined to beat you to the 7,000rpm redline before you can flick the '+' paddle for the next power surge on your way to maxing out.

The heart of the Evo X FQ-330 is not, strange to say, its engine; it is its tremendous vice-free four-wheel drive grip — even on soaking wet tarmac. Combined with meaty steering that responds immediately to the smallest of driver inputs, and the power and glory under the bonnet, it guarantees few cars can keep up with, let along pull away from, a well-driven FQ-330 SST.

Some fast cars look for tunnels (the gloriously aural Ferrari 430 Spider); Evos look for bends. The faster, more sweeping and more squirrelly the better. In reality, on a treacherously twisty section, very, very few cars (perhaps only another Evo X) can stay in your mirrors.

In a fast car, stopping is arguably more important than accelerating: a set of hugely powerful (and hugely reassuring) Brembo brakes haul the 330 to a stop just as quickly as it leaps forward when you crack the accelerator pedal.

These days you'd be hard-pressed (or very fortunate) to drive an Evo at seven-tenths even some of the time — on paper, nought to 62mph takes a gut-squeezing 4.4 seconds; on the road it feels faster.

Most times traffic will restrain your ardour better than any rev-limiter or speed camera, so it's good news that, without compromising its raging bull character, the FQ-330 still manages to serve up day-to-day user-friendliness whatever the weather's doing. Thank the AWC button just behind the selector lever that optimises the all-wheel drive system for blacktop, gravel or snow.

Running wild may be fun but the Evo's running costs are not so funny. With a real-world average thirst of 23mpg for the most expensive Premium grade unleaded, your local petrol station attendant will quickly become more familiar than your most-liked Facebook pals.

It's not just how much petrol the turboed four-pot burns through, but how much you can carry with you — the Evo's tank holds just 12 gallons: about enough for a safe 200 miles. And running on the cheaper regular unleaded doesn't produce quite as much power.

No surprise that the ride is hard; the real surprise is that the ride, on 18-inch alloys and wide lo-pro rubber, is not at all harsh or jarring. Potholes and speed humps can, amazingly, be taken at normal speeds. What you do get is real feedback about the road surface; essential for those times when you're driving hard and fast.

As they look, so you'll find them to be: upholstered in a suede-like fabric, they're brilliantly supportive (especially for your shoulders, back and thighs) and marvellously comfortable.

Every time you fire this point-to-point cruise missile through corners you'll murmur a little prayer of thanks for them because rather than handing you your rump, your Recaro will keep it exactly where it should be.

Drop into the deeply-bolstered driver's seat — it fits like a glove — and you're faced with a small, sporty, steering wheel that absolutely feels 'the biz'. Grip the hard, leather-wrapped rim lightly and the paddle-shifters are just an easy finger-flex away. Remote buttons are built-into the wheel for audio and Bluetooth control.

There's plenty of cabin room around you — above your head and especially for your elbows during serious wheel work. Logic underscores the switchgear and controls layout, while the touchscreen displays are easy to take in. A traditional handbrake keeps it simple for pulling the perfect J-turn!

Knowing its full-bore potential, the cabin, at ordinary everyday speeds and during motorway cruising, feels and sounds unexpectedly peaceful — a place where you and your passengers can enjoy the fully-featured 650-watt Rockford Fosgate hi-fi that shares the colour touchscreen with the SatNav.

The Evo can happily double-up as an everyday family car but while you can seat three abreast in the rear cabin, they won't be particularly appreciative. Especially if you plan on driving hard.

Two adults, however, travel comfortably enough thanks to the semi-reclined backrest angle, and plenty of leg, knee and foot room. Parents will be sure to appreciate the Isofix child seat mountings in the outer back seats; celebrity passengers will be glad of the privacy glass. And getting in and out is easy thanks to the regular saloon bodystyle.

Pop the Evo's bootlid and you're faced with a wide and fairly deep luggage hold although it's not as long as it could be because Mitsubishi have installed the Rockford Fosgate base box, battery, and screen wash reservoir right behind the fixed rear seatbacks. Mate, this is a car you buy for yourself!

Long-term owners will probably find themselves using the large boot spoiler as a convenient 'handle' for lifting the bootlid — it just seems the natural thing to do! Actually it's not too much of a hindrance when parking because it makes it easier to gauge where the Evo's tail ends. The throttle, brakes and steering are all manageable at parking speeds, so no worries there either.

As to what this Big Bad Wolf can do, best just to let it show you. As exciting and entertaining as ever, the FQ-330 SST leaves you constantly inventing reasons to take the longest route — even if you're only popping down to the woods to visit Grandma. And Little Red Riding Hood? Don't worry about her: she'll be safely strapped into the Recaro beside you all the way! — MotorBar