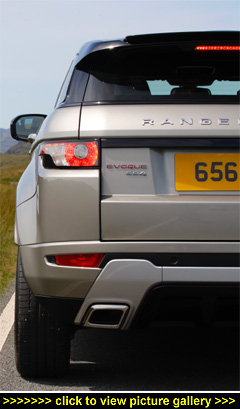 “30,000 Range Rover Evoques have
already been pre-sold. Great news for
Great Britain as, after all the razzle-
dazzle, the stylish new Range Rover
five-door Evoque and three-door
Evoque Coupe models are finally
ready for delivery...”

ADVANCE ORDERS in the UK alone number around 10,000. And all before the first Evoque has been delivered to the first customer. Prices reflect the Range Rover name: they start from Ł27,955 and top-out at Ł39,995.

These may be recessionary times but that hasn't put customers off. Interestingly, about a third of these 'early adopters' are women — likely to be high profile singles, ladies who lunch (and shop!), yummy mummies, and empty-nesters chauffeured by their partners.

You can get a taste of the public 'image' created for the Evoque from the fact that Victoria Beckham has 'consulted' on some 'posh 'n' spicy' interior treatments — so watch out for a 'VB' special edition sometime soon… Tellingly, one of the many 'red carpet' launches for the new Evoque took place at Harvey Nichols, where celebs, WAGs and the wealthy welcomed the latest Chelsea tractor home!

Hype aside, be assured that all that glitters — at least in regards to the Evoque's performance — is most certainly not fool's gold. In truth, the Evoque is something of a gem.

For a start, it uses more or less the same platform as the highly-capable Land Rover Freelander along with the same All Terrain Response system (for 4WD versions).

Furthermore, power comes from a significantly revised version of the 2.2-litre turbodiesel unit (60% of components have been changed) or, for those with a liking for unleaded, a turboed 2.0-litre Ford petrol engine.

The Evoque's rear seat legroom and boot space suffers (for the record, boot/load space is 575 to 1,445 litres) as it has a marginally shorter wheelbase than the Freelander, but there again it's a smidgen wider; it also has shorter front and rear overhangs, making its 4,365mm length easier for Sloane Street parking. More importantly, it's also the lightest-ever Land Rover model.

The majority of Evoque buyers will order one of the four-cylinder 2.2-litre turbodiesel engines (available in 147 or 187bhp tune); most will also go for a 4WD set-up. Currently, the less practical but racier-looking three-door Evoque Coupe is selling as well as the more user-friendly five-door.

Trim levels are Pure, Prestige and Dynamic with, to date, most buyers choosing the top spec and then adding even more items from the comprehensive, extra-cost goodies list; for instance, the Ł450 panoramic glass roof, already specified by 80% of customers.

Driven on the streets of Edinburgh, along Scotland's testing country roads and lanes and with some off-roading in the Glens of the Scottish Borders, the Evoques (3- and 5-door versions) proved to be very capable, well balanced, comfortable and sprightly.

I drove the most likely best-selling Evoque, the 187bhp 2.2-litre SD4 turbodiesel unit with the six-speed manual gearbox and Dynamic specification — it costs Ł37,380. I also tried the Evoque SD4 Coupe with the same engine and same trim level but with the Ł1,610, six-speed auto 'box that costs a hefty Ł39,990.

Both the manual and the automatic returned exactly 30.1mpg — a figure significantly down on the official figures of 50.2mpg for the five-door Evoque and 44.3mpg for the Coupe. CO2 emissions for these drivetrains are 149g/km (manual) and 169g/km (auto) — so road tax will be Ł130 for the manual but Ł265 in the First Year and then Ł190 per annum for the auto.

Not that it will make a lot of difference to a customer about to spend Ł40K, but manual models do have a distinct financial edge; however, the auto is nicer to drive. User-choosers will pay a minimum of 22% Benefit-in-Kind company car tax.

Plush they may be, but the Evoques are no softies when it comes to tough going. With permanent all-wheel drive and All Terrain Response available for bad driving conditions both on and off-road, plus Descent Control for off-roading, they are just as capable and sure-footed as the workhorse Freelander.

Of course, most Evoque owners are unlikely to venture too far off the tarmac. The worst most Evoques will encounter will be long, winding gravel driveways and city shopping or luncheon trips.

However, the Evoque's ability to cope with severe weather conditions under all circumstances will be comforting even if nothing more alarming is required than trudging through deep snow to the ski slopes.

Land Rover has paid significant attention to making the engines more refined — the usual high noise intrusion of diesel engines has been drastically reduced by the addition of extra soundproofing in the engine bay. In fact, it's now so quiet that the wind noise from the very large door mirrors was far more noticeable.

Both of the test models I drove were fitted with 19-inch alloy wheels — these are the best and most comfortable size to go for as anything larger tends to unsettle the ride. That noted, style-conscious drivers seem to believe that bigger-is-best and for them 20-inch wheels will doubtless be mandatory.

The Evoque's 'sharp' and very modern exterior styling, its plush but compact five-seater interior and its very comprehensive levels of equipment (far too much to list here) gives this 'baby' Range Rover all the ownership appeal of the larger Range Rover and Range Rover Sport. Expect the Evoque's styling to become the 'new vision' for the next generation of Range Rovers.

Against? Snug inside but with limited rear seat leg and head room, smallish boot space, wind noise intrusion, and expensive. For? Lots: startling good looks; image, sumptuous interior; strong and quiet engine; compact and easy to park; comfortable ride on 19-inch wheels; and a number of all-terrain technologies at your fingertips. And it's built in Britain! — David Miles