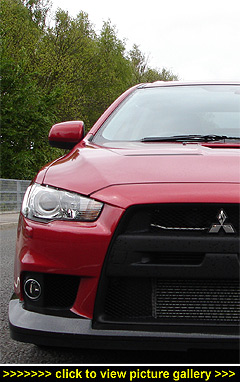 “The Evo X is one of the best-
known ‘budget’ performance cars
on the market — in FQ-360 guise
with 354bhp under its vented
aluminium bonnet it’s definitely FQ:
flippin’ quick...”

STILL OR MOVING, even if you're not a fan, the Evo X is immediately recognisable. Along its flanks, the clean, deceptively inoffensive four-door saloon lines are punctuated by subtly-flared wheel arches stretched over some seriously-wide Yokohama rubber.

And above the rear screen is a 'vortex downforce generator' — a spiky strip of eight small carbon-fibre fins that cleans the airflow over the large boot-mounted rear wing; beneath the bumper and boxed-in by the big-bore tailpipes is a serious-looking downforce diffuser. But, underscored by a low, carbon-fibre lip front spoiler, it's the Evo X's all-black 'bite me' front-end that, in anybody's language, growls 'don't mess with me'.

Sure, some earlier generation Evos had more extreme body mods but the X generation is dramatic enough to suggest you take its supercar-equalling levels of performance seriously — with four-wheel drive and 354bhp, the'X is as quick as it looks, catapulting off the line to 62mph in 4.1 seconds on its way to a governed 155mph top speed.

And despite the recession there's more than enough keen, non-green drivers out there with around Ł40K to spend on a 'budget' performance car such as the Evo X. If the Ł38K 354bhp FQ-360 is a tad too rich for your bank account, the Ł30K FQ-300 costs a significant Ł8K less but still cracks 0-62mph in under 5 seconds: 4.7 to be precise. Maximum speed is the same because all Evos are limited to the same 155mph.

The FQ-360 has a mouth-watering spec, starting with its Super All Wheel Control (S-AWC). This is a vehicle dynamics control system that comprises, and orchestrates, four component sub-systems (Active Centre Differential, Active Yaw Control, Active Stability Control and Sport ABS) to enhance cornering, traction and vehicle stability — not just when accelerating but when cornering normally, braking through corners and under all other driving situations.

The Active Stability Control system stabilises vehicle attitude while maintaining optimum traction by regulating engine power and the braking force at each wheel. ASC also improves vehicle stability by suppressing skidding in an emergency evasion manoeuvre or due to other sudden steering inputs. In addition, it also improves traction under acceleration by preventing the driving wheels from spinning on slippery surfaces. The ASC can also be switched off.

The Sport ABS allows the driver to maintain directional control and keeps the vehicle stable by preventing the wheels from locking under heavy braking or when braking on slippery surfaces. The addition of yaw rate sensors, steering sensors and brake pressure sensors to the Sport ABS system has improved braking performance through corners.

The cabin of the Evo is not there to impress your passengers so don't expect the classy finish you'd get with a similarly-priced Audi or BMW sports saloon. The Evo X is designed for drivers and the driving position reflects this: it is spot-on. The Recaros hold you tight — absolutely essential once you ignite the mechanical fireworks beneath the Evo's vented aluminium bonnet.

The steering wheel only adjusts for height and the manual seat bases only move fore and aft — there's no base tilt, height adjustment or lumbar support. Not that you'll miss them because the Recaros are supportive in all the right places, particularly around the shoulders. And you do get height-adjustable front seat belts.

More good news: there's room in every direction and visibility to the front and side is excellent. Looking back is not so great because the rear spoiler partially blocks the most important section of the rear screen. Apart from the multi-function (it covers driver's information, music and navigation) touchscreen and a hazard warning switch, the fascia is refreshingly uncluttered.

Even the dial-count is kept low — just two; a rev-counter and a speedometer, both with white-on-black graphics and white needles, separated by the driver's information screen that incorporates a small digital bar graph fuel gauge.

The most important information on the display screen can be found at the top: it shows which mode of the S-AWC is currently engaged; 'tarmac' (for dry, paved surfaces), 'gravel' (for wet or unmade surfaces) or 'snow' (for snow-covered surfaces). Switching modes is as easy as pressing the switch sited just behind the gear lever — this can be done on the fly at any speed.

While there's no fancy starter button (just a traditional key), nice touches include the music system that stores your CDs onto its 30GB hard drive as they play and the straightforward A/C controlled by three rotary knobs. There's a simple ball-shaped carbon-fibre gear knob and traditional handbrake with a carbon-fibre grip. And that, apart from four one-shot auto up/down electric windows, is about it.

Apart from the Evo's practical saloon configuration seating — unlike many other seriously fast cars, the 4/5-seater Evo X will get you where you're going not only at a rabid pace but whilst carrying four near six-foot adults with room for their legs, knees and feet and, in the 400-litre boot, their luggage too. A well-padded, comfy centre rear armrest with built-in cup-holders makes two-in-the-back the best seating arrangement and there's the usual mix of bins and cubbies dotted about the cabin.

But what's it like to drive? Addictively more-ish. Power for the Evo X comes from a new four-cylinder, 2.0-litre turbocharged and intercooled aluminium engine that replaces the 2.0-litre iron-block used in earlier models. The new 1,988cc engine features continuously-variable valve timing (MIVEC) on both the intake and exhaust camshafts and, as intended, it revs easily and delivers a high-rev punch. Peak torque, on tap at 3,500rpm, is a meaty 363lb ft.

But unlike a Ferrari, more's the pity, there's no glorious soundtrack and barking concerto from the Evo's exhausts — but then you won't attract the wrong kind of attention when you drop the hammer on those 354 horses. And when you do, the boost is so smooth that it really doesn't feel turbocharged.

The gearbox's ratios are clearly stacked to favour the engine's power band and so deliver superb in-gear performance. The lower gears are close-run, with first used up in the blink of an eye when you full-bore it. Keep the revs coming and before you know it you'll be snatching fourth. The upside to this is that whatever gear you're in, the FQ-360 always feels raring to go.

The change action on our test car was notchy — not all the time, just intermittently; but it never once baulked. Interestingly, MotorBar's Maggie Woods managed the change perfectly every time with never a snick of complaint! Hmmm.

One thing the Evo could use is a cruising sixth gear for motorway work. That said, and despite constantly trying to change up to a phantom sixth gear, at regular motorway speeds the FQ-360 is liveable enough: 70mph calls for 3,200rpm in fifth; 80mph 3,600rpm.

While the 360's power and torque is unarguably big-hearted, not so generous is the Evo's fuel tank — at just 12.1 gallons it limits the safe range to around 200 miles.

With some motorway miles under our belt our 360 averaged 20.5mpg although 17.7mpg was more realistic for mixed secondary roads and town driving. Officially, the FQ-360 returns 19.9mpg on the combined cycle and 12.9mpg in town.

'No fear' handling is without doubt the Evo's biggest draw. Put bluntly, on just about any road you care to pick, and at any time and in any weather, few road cars have a hope in hell of sticking with a well-driven FQ-360.

The Evo's all-wheel drive system ensures enormous grip and handling predictability. Even when it seems you're asking way too much, the Evo still feels unshakeably glued to the tarmac. And okay it may be a cliché, but it really does 'corner on rails'. At the same time it has an awe-inspiring talent for unhesitatingly changing direction which it seems to do the very instant you've thought of it with zero-tolerance body roll and unnervingly sharp turn-in.

Stating the obvious here — the suspension is very firm. However, we thought it rode amazingly well given its unashamedly handling-biased damping. Note we said 'firm' — not harsh. What we definitely weren't expecting was how meticulously the Evo communicates the road surface — every little informative nuance sent back through the Recaros.

And speed humps and potholes, although felt and heard, were taken without any banging, crashing or jarring. In fact, as each day of our week-long test came to an end we found we liked the Evo's physical communication more and more. For the record, one of MotorBar's road testers suffers from a bad back and she drove the bulk of the Evo's test miles — with not one ache or word of complaint. The opposite, in fact.

We liked the Evo X. A lot. It's a two-way street: the Evo X also likes keen drivers, rewarding them with terrific interaction and asking nothing more in return than that you turn the key in the ignition. It's thoroughly engaging to drive, outgrips just about anything else on four wheels and serves up a rush of hardcore performance that can be laid down in just about all weathers and on all roads. What we never anticipated was the FQ-360's endearing character which helps make it a surprisingly justifiable everyday proposition. Now who'd a thought it? — MotorBar