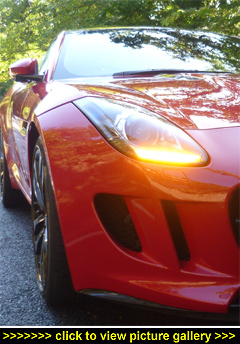 “It’s got a glorious Salsa Red coupe
body, runs all the way to 171mph
and hits 62mph in 4.9 seconds.
The iconic Jaguar on its nose says
everything and it turns heads with
a vengeance — it can only be the
supercharged F-Type S Coupe...”

IT'S THE KIND OF CAR would-be lottery winners lust after; yet, surprisingly, it's a car you don't even need one million pounds to buy — a mere sixty grand would see it on your driveway!

Ł60,250 buys you 374bhp — if you want more, there's always the explosively-quick 542bhp V8 R but for that you'll need to stump up another Ł25K. Whatever powerplant is under the contoured bonnet of your F-Type Coupe you'll need to get used to the envious looks thrown your way wherever you go, as well as being approached by total strangers who just want to tell you what a great-looking car it is…

Which it most certainly is. Just look at that swept-back cabin-rearward profile — stand next to the Coupe and you can't resist running your fingers over its shapely shoulders and sublimely swollen rear wheelarches. A cleverly unadorned and deceptively captivating piece of design.

But while the gorgeous looks are seductive enough to sideline even its topless sister, they're not about beauty per se — the fixed-roof bodyshell endows the two-door coupe with more rigidity than the drop-top version. Proof of this can be seen by the fact that the Coupe's all-aluminium structure is rigid enough to accommodate a panoramic glass roof.

In fact, the F-Type Coupe is the most torsionally rigid production car Jaguar has ever built. And the stiffer body has given Jaguar's engineers the opportunity to finesse the suspension and damping. While it's not visible like the panoramic roof, it's nevertheless tangible from the very first off.

The moment you pull away the Coupe feels confidently 'planted' — and at the same time palpably more precise and nimble on its gloss black, 20-inch alloy wheels than the drop-top F. And while the seemingly 'sprayed-on' Pirelli rubber (255/35s at the front with 295/30s bringing up the rear) indubitably enhances the grip, it's the accomplished chassis that makes it all happen.

While it looks physically substantial, the Coupe never feels anything other than as lithe and supple as its big cat name implies. The steering is keen, accurate, and well-weighted. Much of its 'free spirit' feel is down to the fact that its pro-active driver aids are as discreet as his lordship's butler; involving themselves when necessary, but for the most part working discreetly behind the scenes to the degree that you're rarely aware of their existence.

The Coupe's taut body control is impressive; the fluent manner it maintains balance and grip as it flows through quick corners, all the while keeping those huge Pirellis in contact with the road even when racing over bumpy blacktop, sets it apart from its peers. Refined GT? It plays that role effortlessly; nonchalantly even. The harder act, that of true-blue sports car, it makes its very own by serving up a driving experience that's pretty damn flawless.

The 3.0-litre supercharged V6 puts a potent 374bhp backed by 339lb ft at your command (and pleasure!), delivered to the rear wheels via Jaguar's eight-speed QuickShift transmission. Press the Start button and the engine fires up with a pleasing burble that hints strongly at the fun to come.

The sounds emanating from the dual exhaust's twin trumpets are absolutely addictive; so much so that we tended to leave the active sports exhaust switch in it's 'loud' position where even somewhat reined-in acceleration triggers a smile on your face.

Really light it up and you'll get the whole enchilada: a full-on banshee howl as you keep the pedal to the metal; and an intense crackling and popping when you lift off near the redline that outdoes the Bastille day fireworks at Trocadéro. Once heard, never forgotten!

With eight gears and a deliciously tractable 374bhp V6, the Coupe is always primed for the starter's pistol — or in this case, your right foot. Zero to sixty-two miles-per-hour is very quick. And the fast-acting, seamlessly-shifting eight-speeder makes it feel even faster.

Make no mistake — play hard and this supercharged V6 generates enough 'g' to press you back in your seat (there's even a g-meter fitted to monitor g-force). Flat out, you'll hit a genuine electronically-limited 171mph.

At any speed the Coupe feels vastly rewarding to drive: smooth and comfortable as it lopes effortlessly along motorways; invigoratingly playful on twisty back roads; and at any point, capable of transforming from refined GT to hard-edged sports car in the blink of an eye.

'Economy' is most definitely not the first word that comes to mind when you look at this true-blue 171mph sporting machine. The official Combined figure is 32.1mpg. Given our 28.1mpg average during a full week's enthusiastic driving, it's likely that some self-restraint could see a real-life extra-urban figure not far short of the official 42.2mpg — and thanks to its 16-gallon tank, that could mean an impressive 550 miles between forecourt visits when touring.

Complementing the chassis's inherent ability are a number of driver aids that ratchet-up the Coupe's dynamism and ease-of-use including a limited-slip diff, traction and stability control systems and, for those who can't wait to get off the line, launch control.

The QuickShift transmission offers a choice of fully auto or full manual sequential control via steering wheel-mounted paddles or the central SportShift lever, as well as a proper Sport mode. Using the flickable JaguarDrive switch alongside the joystick selector enables the driver to choose a Winter mode for slippery road conditions or an even sportier driving style: Dynamic — select both Dynamic and Sport then the autobox is as 'manual' as it gets with no automatic upshifts even at the rev limit, apart from those made via the paddles.

The driver also has the option of configuring the suspension, steering, throttle response, and gear shift settings to suit his or her own personal tastes plus the Dynamic Stability Control button offers two further settings for über-keen drivers: DSC off and TracDSC which provides an even more dynamic and involving drive on dry tarmac.

Mixing and matching and then exploiting all these settings will keep you entertained forever... or you could just stick it in Sport and leaving it there.

Another box to tick is that for the switchable active sports exhaust (Ł350) — this goes one step beyond the standard sports exhaust system to provide a 'loud' button that liberates the spine-tingling 'call of the wild' soundtrack. So good it should be illegal but, thankfully, isn't.

Such a hard-charging machine should come with hugely competent and reassuring brakes — it does; they are. Best of all is the fine pedal feel. Speed is effortlessly wiped off by the four red callipers that come with Jaguar's High Performance Braking system, stopping the Coupe with pulse-steadying reassurance even from high three-digit numbers.

Even wired drivers who want trackday responses from their steeds don't necessarily want stripped-for-action cockpits. The F- Type shines through here — its plush, leather-clad, feel-good cabin is more hedonistic than hardcore. The power-adjustable steering column moves away automatically for easy entry and there's a touch of cool showmanship too — air vents that glide silently open when the start button is pressed.

The snug, low-slung driving position, fab 'wraparound' heated sports seats with inflatable side-bolstering and prominent wings for support during high-speed cornering, and the reflection-free all-black steering wheel to prevent distracting reflections confirm that the Coupe's wide, driver-focused cockpit has been configured with serious driving in mind. The controls are ergonomically spot-on; the joystick-style SportShift gear selector intuitive to use; and fine visibility down the ridged bonnet makes for accurate placing on the road.

The cabin's cocooning ambience is brightened by the natural light streaming through the tinted panoramic glass roof (Ł1,250 and another easily-justified options list tick). Headroom is excellent, by the way. And a word to the wise: go for the heated steering wheel (Ł250).

Other desirable cabin features include a digital speed readout, idiot-proof electric park brake (with 'drive through' function), rear spoiler button (if you really must raise it below its automatic deployment speed of 70mph), CD-feed in the storage box under the centre armrest, quite a lot of handy cubbies including a deep bin between the seatbacks in the rear bulkhead, and the unclippable seatbelt-stays on the seats' outer shoulders. Externally, the 'pop-out' door handles are a likeably modish touch.

The Infotainment system is easy to get around and comes with essential features such as navigation, a reversing camera, Bluetooth, and DAB radio reception. The standard-fit 180W hi-fi is fine although the 770W Meridian 12-speaker surround sound system makes a congenial upgrade (Ł1,700) for cross-Channel grand touring duties.

With its short rear-overhang you might think boot space would be as precious as that of its drop-top sister. If so you'd be wrong because there's actually an accommodating 407 litres behind the Coupe's rear bulkhead — more than enough for some serious touring two-up or two sets of golf clubs. Not only that but beneath the main boot floor you'll find a deep locker to hide away your valuables.

Engaging and thrilling to drive, the F-Type Coupe is one of Jaguar's most capable and sporting road-warriors. And, like its glamorous spiritual forerunner the E-Type, it's also brilliant value. So what are you waiting for? — MotorBar