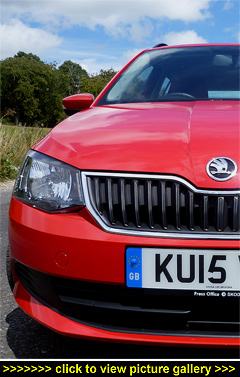 “Skoda’s new Fabia range was no
sooner launched than it was voted
What Car? Car of the Year for 2015!
Now the five-door hatchback has
been joined by an estate version,
priced from Ł14K, that offers a lot of
load-lugging for your pound...”

WHILE THE HATCH AND ESTATE SHARE the same wheelbase and both seat five, the big difference is what's behind their second rows — the hatchback manages a class-leading 330-1,150 litres; the longer 'wagon' packs away considerably more: 530-1,395 litres.

This third-generation of Skoda's city car is now lower, wider and a snappier dresser than its predecessors. The front-end is notable for its black 19-vertical-bar grille flanked by sharp-cut headlamp units; and the sculptured bonnet is defined by crease lines that run on along the flanks to meet the distinctive black-edged taillight units set into the Fabia's rear shoulders.

Any of a new generation of three- and four-cylinder diesel and petrol engines offering between 60 and 110hp can be specified: choose from a 1.0-litre three-pot petrol engine with 60 or 75hp, a 1.2 four-cylinder petrol unit with 90 or 110hp, or another three-cylinder, a 1.4-litre turbodiesel, that puts out 90 or 105hp.

If you're planning on making good use of the estate's loadbay you'll be best served by the torquey 1.4-litre turbodiesel. The 90PS version tested here generates 88bhp and a wholly usable 169lb ft of torque from 1,750rpm, making it responsive not just getting away with a load on but also in the mid-range for clearing traffic.

The three-pot turbodiesel works well harnessed to the seven-speed DSG 'box — it's smooth and eager to please and adequate punch is delivered cleanly and in Sport mode it feels agreeably 'on the boil'. And while you can hear it's a diesel at tickover, at 70mph you're not aware of it at all, making cruising at the legal limit refreshingly relaxing. Flat out you'll see 114mph and the benchmark 0-62mph is posted in 11.3 seconds.

Officially the 1.4-litre/DSG 'combo' returns 74.3mpg in the Combined Cycle — by the end of a hard week's driving our three-pot had recorded an easy-on-your-wallet, real-world figure of 61.8mpg and we can't honestly imagine anyone complaining about that. And thanks to emissions of 99g/km it won't cost you a penny in road tax either. For the record there's a fuel-maximising stop/start system fitted.

Both the hatch and estate run on a version of the Volkswagen Group's much-praised MQB platform which already underpins many of the group's latest models including some great handlers such as the Golf and the Audi TT.

And MQB works its 'magic' on the Fabia too — laden or unladen, the estate feels confident and competent on the road. It's easy to place on the road, the steering is well matched to the light-footed handling dynamics, it grips well whatever the weather, corners neatly, brakes strongly and rides well. While it manages cargo-carrying duties with aplomb, it's equally kind to passengers.

The neatly-finished cabin is inviting and easy to enter. A smart, contemporary fascia with a brushed metal finish that highlights the 'clean' design makes for a cabin you'll be happy to spend time in, either behind the wheel or as a passenger. The two-tone fabric-upholstered seats are supportive and pleasantly bolstered (effective but light). There's space around you in all directions, and the padded outer armrests are well sited on the doors.

An integral 6.5-inch touchscreen caters for your infotainment needs while SmartLink technology turns the Fabia into something of a smartphone on wheels — it uses MirrorLink, Apple CarPlay and Android Auto interfaces to connect your phone and the car, mirroring certain apps on the Fabia's own screen and enabling you to listen to music on your smartphone or receive turn-by-turn directions via a navigation app, all mirrored on the touchscreen display.

The top-of-the-range Bolero radio that forms part of the infotainment system also lets you, when you connect via Bluetooth, to read, write and send texts using touch as well as multi-touch gestures. A gloss black surround encases the touchscreen/Bolero unit and there's more style on show from the three-spoke leather-rimmed steering wheel that features satin black with chrome filleting.

Helping you keep your cool is a very effective AirCon unit and there's plenty of storage solutions along with a drop down glasses holder plus handy lidded storage bins built into the spaces below the front seats.

Neither will you 'dry out' because the front door pockets hold 1.5-litre bottles; the glovebox takes a litre bottle; and the rear door bins hold half-litre bottles. Another nifty touch is the small mesh pocket on the inside edges of the front seatbacks that's perfect for tucking away a mobile or any other small items you need to keep track of.

The DSG autobox is utterly straightforward — along with the usual P-R-N-D settings it allows driver-overridden manual shifts made using the selector lever at any time. Tapping the lever lightly back towards S moves you into Sport mode; tapping it back a second time takes you back to Drive. As we said: foolproof.

Traditional dials with chrome needles and bezels sit either side of the driver's information display that includes the essential digital speed readout — a toggle switch at the end of the wiper stalk is used to skip through the menus. Also sticking with tradition is the handbrake, something that will please many owners.

Externally there's a set of nice-looking 15-inch alloy wheels and black roof rails while safety is covered by a five-star Euro NCAP rating, Front Assist (audio/visual warning of impending collision with braking automatically initiated if the driver doesn't respond), speed limiter (but you can can 'kick though' in an emergency), driver and front passenger front and side airbags plus curtain airbags, ISOFIX child seat fittings on the outer rear seats, height-adjustable front belts, front and rear seatbelt warning light, a traction and stability control system and tyre pressure monitoring.

If you're a family of five you don't have to be sardines to fit comfortably inside the airy Fabia estate. In fact it's particularly friendly in the rear cabin with loads of room for some serious R&R (rest-and-relaxation) for two adults using the outer seats. Three-in-a-row will go though and with some headroom to spare. The 60:40 backrests are set at good angles and the headrests are also pleasant to use.

The back seats are set higher than those in front, which is good both for views out as well as lower leg comfort on longer journeys. The long rear windows might be wind-ups but they drop fully into the door when opened which is good news for travellers who like 'real' air on a hot summer's day.

For a compact estate the Fabia sure has a lot of load space — its boot measures a substantial 530 litres and extends to 1,395 litres; the back seat bases flip up and tumble forwards so when you fold down the seatbacks you get a long, low flat cargo bay floor. Incidentally, even if you've really stuffed the boot reversing and parking is still easy thanks to rear parking sensors and positional graphics on the touchscreen.

A practical add-on that might appeal to some owners is a bike carrier — for Ł180 it lets you transport two bicycles safely inside the boot. Should you need to tow then the 1.4 Fabia will easily pull a braked 1,100kg. Naturally you get sturdy folding bag hooks and a flexible repositionable 'corral' that's perfect for transporting bottles. Also useful during the winter months is the ice-scraper conveniently located on the inner side of the fuel flap.

For not too much money the Fabia is a self-assured estate that's well fitted-out and won't break the bank to run. Its smart cabin is roomy and with the sporty DSG automatic transmission it's as easy to drive as it is easy to live with. As they keep saying, Skoda makes Happy Drivers. It's true! — MotorBar