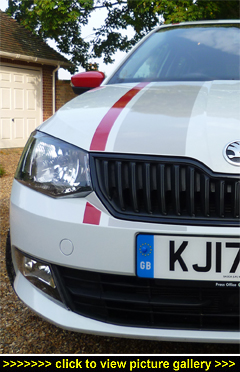 “For the fourth year in a row more
than a million cars have rolled out
of Skoda’s factory gates — and a
major contributor to this seven-figure
demand is the Fabia supermini...”

IT'S SUPERMINIS LIKE THESE that consistently populate the list of the UK's best-selling new cars. Fighting its corner hard, this latest-generation five-door Fabia takes on the likes of Vauxhall's Corsa, the Kia Rio, Peugeot 208, Ford's Fiesta, the Mazda 2, Citroen's C3, and the Polo from Volkswagen.

To its credit the Fabia comes out of the fray convincingly unscathed, helped by the fact that it offers more supermini for your cash. And if you want your supermini to stand out from the crowd, then the sporty-looking special edition Redline model could be just the ticket.

And stand out our press car certainly did: its Moon White metallic paintwork gleamed while a wide red-and-grey stripe running from the front bumper, over the roof and down its short tail, red door mirrors, gloss black multi-spoke alloys, sharply-creased waistline and candy-twist roof aerial together gave it a jolly, piratical air.

Externally, it looks like going to the 'redline' will be something this Fabia does with ease — and to make sure it does, under its profiled bonnet sits a turboed 1.0-litre three-pot petrol engine that kicks out 108bhp and 147lb ft of torque. More than enough to take it to 122mph and clock the 0-62mph time in a satisfyingly perky 9.5 seconds.

With prices for the Fabia hatchbacks starting at Ł11K (estate versions cost from Ł13K), it's easy to get their popularity. The Redline sits in the line-up above the third in the pecking-order SE L and below the range-topping Monte Carlo — and is priced at a fiver under Ł16K.

Settle in the fabric-upholstered sports seat and grip the perforated leather rim of the fab, flat-bottomed, three-spoke steering wheel and you'll feel ready for action in the spot-on driving position. The seats really are exceptionally good with very effective bolstering, quilted centre panels, excellent upper back and shoulder support and integral headrests.

Height-adjustable seatbelts ensure you're at ease when belted-up, and there are padded outer armrests. Proof of just how good the sports seats are came on a Kent to Hampshire trip to attend the SMMT South press day that saw a two-hour run take almost double that due to accidents on the M25 and grinding stop-start traffic. Not a problem for us — driver and front passenger both climbed out at journey's end more or less as fresh as when we'd set off four hours earlier. Good job, Skoda!

Better still, the deep glasshouse not only means an airy ambiance with a fist of headroom but, combined with wide edge-to-edge screens both front and back, it ensures A1 visibility in all directions. Reversing sensors are fitted (with an on-screen grid guide), and while they're always a good insurance, parking this particular baby is dead easy.

The smart brushed metallic-effect dash has a clean sweep to it, and set high in its centre is a 6.5-inch touchscreen with SmartLink+ and MirrorLink for smartphone connectivity to keep you online while on the move. A DAB radio is also part of the package, as too is Bluetooth, USB and Aux-in ports plus a SD card slot. The audio system is also upgraded to include an Arkamys surround sound system with six onboard and three virtual speakers.

Steering wheel controls operate the audio, voice control, phone, assistance systems (such as Front Assist), and the driver's onboard computer: this includes all the usual trip info such as range, average mpg, and digital road speed.

You don't go short of creature comforts either: in addition to what we've already mentioned you'll find electric front windows, powered and heated door mirrors, efficient AirCon (with dash-top vents that deliver air to exactly where you want it), height adjustable sports seats, speed limiter, a brolly under the front passenger seat, a fatigue sensor that tells you when you should take a break, and Front Assist which uses radar to provide audio and visual warnings of an impending collision — if you don't respond it will initiate autonomous braking down to a full stop to minimise any possible impact.

In-cabin storage is well thought-out with long, deep bottle-holding door bins, a large glovebox with a damped lid that also has room to store a one-litre bottle, twin cupholders in a deep sided front tray ahead of the gearlever, drop-down glasses holder, and — particularly useful these — elasticated mesh pockets on the inner sides of both front seat backrests that are perfect for all sorts of oddments from parking plastic to keys and USB sticks. There's even a clip at the edge of the windscreen for your parking ticket.

Overall this roomy and good to ride in supermini is smartly put together, with high gloss black and chrome filleting highlights that add some tasteful glitter to the all black theme — few superminis make car travel so pleasant.

Supermini it might be but that doesn't stop the five-door Fabia from being accommodating, not just in the front but in the back too. Foot room is very good as too is knee-room (even if the person in front has their seat back to maximise stretching room) and the backrests are set at an angle that will keep your passengers' backs happy, plus there's safe space between the tops of passengers' heads and the roof. The smartly-upholstered seats with their quilted centre panels are not only nice to sit on but keep you located without being in the least bit 'draggy'.

The rear windows are straightforward wind-ups, and there are practical door pockets, magazine pouches, and Isofix child seat fittings on both outer rear seats.

With just three cylinders and 999cc you might expect the Fabia's TSI petrol engine to be a tad underwhelming — not a bit of it: it's eager and more than willing to put every last one of its 108 horses at your disposal. And backed up by 147lb ft of torque, it's a get-on-with-it kind of motor that's as laid-back or as lairy as your right foot wants it to be.

Keep the throttle light, however, and you'll barely hear it, which makes the cabin all the more restful — making it a good choice for motorways. The icing on the cake is that, thanks to a slick-changing six-speed manual gearbox, getting the best out of it is always fun.

Officially the Redline's Combined Cycle figure is a pump-shy 64.2mpg. While the 1.4 diesel units that can be specced instead of petrol are the most economical (80+mpg), a week's merciless test driving in the 1.0-litre petrol saw an overall average of 55.1mpg recorded. Added to low emissions of 103g/km it means running costs will be low. A stop-start system is fitted to maximise economy but we switched it off for much of the week, especially in the two-hours we spent grinding around the M25 in first gear. So if we managed 55mpg, then you should do even better!

In the early days Skoda's detractors liked to point out that while it used VW Group parts and technology, it wasn't the latest stuff. Well, have we got news for them — these days Skoda cars run with cutting-edge VW componentry, often getting it ahead of their VW and SEAT sisters. For instance, take the Fabia's chassis — it's the VW Group's latest MQB platform which explains the Fabia's driveability.

Traction is good and there's decent grip to be had from the 215/45 Bridgestone 'wraps'. The ride is composed courtesy of forgiving damping that soaks up poor blacktop but that doesn't prevent the Redline handling keenly and it can be hustled along neatly. The direct steering makes light work of town traffic while being precise enough to tempt the driver to indulge the chassis's playful side when driving faster.

So, puntable? Absolutely! And the flip side of pressing-on is equally reassuring thanks to strong stopping from the big vented discs at the sharp end (there are discs at the rear, too).

Given the Fabia's urban-friendly 3,992mm length, its boot is impressive — and as much as most owners are likely to need; with the rear seats occupied there's a sector-best 330 litres for luggage. However, if you're likely to get hit for some occasional cargo-carrying duties then just fold down the backrests and you'll have a practical 1,150-litre loadbay.

Like the main cabin, the boot has plenty of practical features including a versatile two- position rear shelf, sturdy fold-out hooks for bags, several open bins, and a bottle holder with strap.

Under the floor in the deep spare wheel well sits a strong but lightweight moulded box, but as it's occupied by nothing bigger than a 'tyre repair kit' there's plenty of space for oddments. And whatever you're loading or unloading, the just-above-the-knee boot load sill height will make things easier; as too will the head-friendly tailgate. Other welcome features include the easily-accessed ice-scraper on the inner fuel-flap and the rear wash/wipe for the good old British weather.

This latest third-generation Fabia is Very Good News and has already picked up a number of meaningful 'Best Small Car' awards in 2017. Whether you're buying one for practical or economical reasons, in Redline guise it will inject a large shot of driving pleasure into your everyday motoring. ~ MotorBar