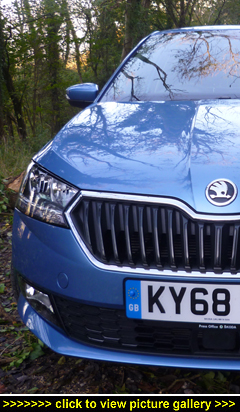 “Four million plus and counting —
that’s how many of Skoda’s Fabia
supermini have been bought since
it first appeared at the cusp of the
millennium. And now there’s an
even better version on sale...”

A SIGN OF THE TIMES is that engine choices are not between unleaded and diesel but only between petrol power outputs. For this 2019-model-year Fabia there are no diesels. The five-door hatch prices (there are also estate models) kick-off from a budget-friendly Ł12,840 and top out at Ł18K.

If the Fabia supermini is on your shortlist then it's safe to assume that you like the cut of its jib — externally this latest Fabia, fresh from a makeover and subtle redesign, is now even snappier-looking with a new and wider grille flanked by sharper headlights with intricate detailing plus it rolls on new-design alloy wheels (18-inchers are optional).

Despite the 'mini' part of the name, today's superminis are not small cars. This Fabia is not only roomy but big enough inside to be genuinely practical without in any way compromising on how you use it — either as a solo machine, 4/5-seater family runabout or compact workhorse.

Inside the refreshed Fabia is altogether much plusher with tasteful trim including brush-effect fascia trim and contrast stitching on the seats and door armrests and sports a new instrument layout incorporating a multifunction trip computer along with a central 6.5-inch touchscreen with SmartLink+ for that essential smartphone connectivity via Apple CarPlay, Android Auto, MirrorLink and SmartGate.

Better still, SE L versions come with Infotainment Online and an Amundsen infotainment and navigation system that's refreshingly straightforward and easy to use (with clearly-marked shortcut buttons either side of the screen instantly to jump you into the main menus) and delivers timely and easy-to-follow directions. Voice control, a DAB radio and Bluetooth connectivity can be taken for granted.

The supportive seats are upholstered in a 'micro suede' fabric that's warm in the colder months and liveable even when the UK's summer sunshine is turning the cricket creases dark brown. Even drivers on the tall side will enjoy space above their head and around their body and there's enough bolstering to boost comfort but not trap you in your seat when it's time to climb out.

Setting that 'just right' driving position takes just seconds and is helped by there being height adjustment for both front seats as well as height-adjustable seatbelts. The switchgear, buttons and controls are all well sited and there's a quality feel to the stalks and many drivers will be happy to see a traditional pull-up handbrake close to their left thigh.

In-cabin storage is good with plenty of cubbies around the selector lever; the door pockets are usably deep (water bottles accepted!), a fair-sized glovebox, a foldaway height-adjustable armrest between the front sets with a hidden compartment for sunglasses-size items plus a handy netted 'patch' pocket on the driver's seatback and, of course, cupholders. All in all a practical living space.

Thoughtful touches include an umbrella under the front passenger seat, an ice scraper housed in the fuel filler flap to make it easily accessible on those frosty mornings (the scraper also incorporates a gauge for measuring the tyre tread depth), and a phone cradle in the centre console.

If you're so minded you can tick the boxes to add extra safety features such as Adaptive Cruise Control, a rearview camera, Blind Spot Detection with Rear Traffic Alert, Light and Rain Assistant, Driver Fatigue Assistant, and LED headlights.

The Fabia hatch has always scored well on cabin space and that's not changed. Measuring four metres nose-to-tail it provides comfortable accommodation for up to five passengers — six-footers can travel comfortably in the back even if their driver is no Napoleon and without any uncivilised elbow clashes. Three is also doable, especially if your 'five' happens to be a family group with youngsters. Parents will be pleased to find that two child seats can be fixed quickly and easily using the Isofix anchors.

And its regular-shaped 330-litre boot is one of the largest in its class; drop the rear seatbacks and this opens up a 1,150-litre cargo bay (more that you'll get in a Vauxhall Corsa or Ford Fiesta). The Fabia is only available with five doors; they open wide and as well as making entry and exit easy for passengers, they also make for quick access to the inner end of the loadbay — useful if your cargo is tightly packed. Another practical new feature is the double-sided boot liner that features both a textured and an easy-to-clean side for muddy boots. And if tow you must then know that the 108bhp Fabia hatch will haul a braked 1,100kg.

For the record, should you regularly require more cargo space, the slightly longer estate version comes with a 530-litre boot that extends to a 1,395-litre loadbay.

Handling-wise the Fabia is agile and takes corners reassuringly; it feels stable at high speeds and is confident around town. And all l the time accompanied by an agreeably compliant and comfortable ride that's not upset by larger bumps, be they urban or country living size.

On the move the turboed 108bhp three-cylinder engine feels very responsive — its 148lb ft of torque is in full song from 2,000rpm so it's zippy in-town and around the houses and pert and peppy out on A- and B-roads where the clued-up seven-speed autobox works fluently with the wide torque band (2,000-3,500rpm), keeping the Fabia ready to spurt forward from any speed at your right-foot's command.

It also feels — and sounds — refined at higher speeds so for those times when you're just going with the flow or cruising an M-road it's an easy rider. Off the mark to 62mph takes just 10.1 seconds, and maxed out it'll see 120mph.

Low running and road tax costs are always welcome and with an official Combined Cycle consumption figure of 60.1mpg and a real-life 57.7mpg over the course of a hard driven week's testing, Fabia drivers will be happy bunnies. Road tax won't break the bank either — thanks to low CO2 emissions (106g/km) the Government will take just Ł145 from you in the first year and after that just Ł11.66 per month (Ł140).

This latest Fabia is a comfortable, civilised and accomplished all-rounder that's good to drive, economical to run, and versatile enough to be most things to most owners — and no doubt it won't be long before Skoda has sold another million! ~ MotorBar