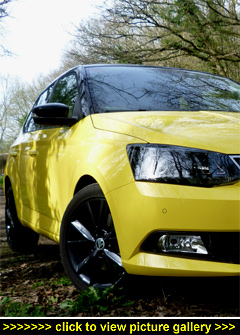 “Sharp, chiselled looks define
Skoda’s latest-generation Fabia
as it steps into the supermini
arena to face-off against some
very driveable rivals from the
likes of Peugeot and Ford...”

A VERTICALLY SLATTED front grille flanked by clean-cut headlights with integrated daytime running lights and distinctive body lines define the sharply-suited, sportily lower and wider new Fabia — all ready to light up a dull day, both visually and dynamically.

Skoda reserve the biggest thrills for their vRS-badged models, although to date a 'go-faster' version of the new Fabia hasn't reached the price lists. Not a problem because the 1.2 TSI model we've been driving this past week is powered by a tractable 108bhp petrol engine that's made even more lively courtesy of an eager-beaver seven-speed dual-clutch gearbox.

Backed-up by 129lb ft of torque between 1,400 and 4,000rpm, this four-cylinder powerplant proved to be quite a party animal; a happy revver, it delivers some surprisingly entertaining punch across a large chunk of its rev range.

While the DSG's character in everyday Drive-mode tends to favour economy (our week's pretty hard-driven average came in at a commendable 49.1mpg), happy hour is never more just a few millimetres to the left away; flick the selector lever leftwards into Sport and the four-pot is more than keen to show you what it's got. And it's got quite a lot…

Left in Drive, the 'box naturally follows a quick, smooth and seamless fuel-saving hike upwards through the seven gears. On motorways this gives it an easy mile-eating gait that makes it a relaxing place to be even on higher-rated motorways across the Channel where eighty-five isn't enough to get your knuckles rapped.

In Sport it's a much livelier ballgame, with maximum power extracted before it self-selects the next higher gear — driven like this it feels appreciably quicker to the benchmark 62mph than its on-paper 9.4 seconds figure suggests. Keep the loud pedal planted and it will top out at 122mph.

However, for some real Bourne Identity drivenastics you can change gear yourself by nudging the 'stick' fore/aft to slice sequentially up or down the seven ratios.

Drive down that route and the Fabia shows itself to be a faithful companion: not only is it shorter, wider (both body-wise and with significantly wider tracks front and rear) and lower than its predecessor but it's also lighter by 65kg plus — and it's underpinned by the advanced MQB platform that the VW Group is rolling out across its multi-brand range.

Handling is reassuringly predictable yet eager (our test car was fitted with the optional sports suspension) with well-tamed body control and plenty of grip from the 215/45 Dunlop SP Sport Maxx rubber; it turns-in deftly and can be accelerated through and out of corners and sharp bends with confidence. In short, it's fun to drive.

The brake pedal is progressive enough for very smooth traffic-light or stop-start stops with no jerks, and with discs at each corner (ventilated at the front) there's plenty of power for serious deceleration when called for.

While it can definitely entertain the keen driver, its real forte leans more towards family — in spite of the 'sports' tag it rides nicely and the suspension dies a decent job of insulating those inside from the bumps outside.

With five doors (counting the rear hatch) and seating for five along with a surprisingly accommodating and class-leading 330-litre boot — that's quite a bit more than you get in VW's five-door Polo — the new Fabia is designed to be both practical and versatile in town and out.

Swing open either front door and prepare to be impressed. This is no ordinary cabin — grabbing your attention are the Sports seats with 'quilted' centre panels that look better than inviting (a Ł175 option that's definitely 'to tick for').

Settle into the bucket-style seat and you'll find it to be both comfortable and supportive; the side bolsters are nicely firm and along with the sporty seat architecture hold you firmly when making full use of the Fabia's handling dynamics. A handy feature, incidentally, is the small net pocket on each front seat's inner seatback — rather like a pocket on your sleeve; and equally useful.

Both front seats adjust for height and have large knurled adjusters for hassle-free backrest adjustment. Plus there's a fist of headroom if you need to raise the seat.

The Fabia is a doddle to place accurately on the road thanks to a driving position that's spot-on as well as first-rate visibility = including rearwards, courtesy of the full-width rear screen and non-intrusive rear three-quarter pillars.

The brushed metallic dash is upmarket smart and the ergonomics first-rate — dials are trad analogue paired with unbeatable crisp white-on-black graphics (small gauges for engine coolant and fuel are inset into the two main dials for, respectively, speed and revs); the driver's on-board computer display shows all core trip info as well as a offering a large digital speed readout (also all in crystal-clear white on black) and scrolling though the various modes is easy using the foolproof controls on the tactile steering wheel's high-gloss black right-hand spoke.

A five-door bodyshell naturally includes two rear doors and the Fabia's good-sized door openings provide easy entry and exit from the rear cabin. Once seated in the back there's a good view out through the longish side windows that help keep the cabin airy. For near six-footers there's — unexpectedly and impressively — a fist of headroom, along with masses of space for even the largest feet.

Adults can relax in the outer seats that are upholstered in the same quilted-effect material as the fronts and, importantly, keep you enjoyably located. Three belts but only two headrests doesn't mean that a third in the middle can't be accommodated although to do so means planting a foot either side of the central floor tunnel. For kids it's fine; for adults it's still do-able.

South of the rear seats is a real-world boot; fold the 60:40-split seatbacks and it expands to create a cargo bay with 1,150 litres (in case you're wondering, the Fabia Estate offers 530 and 1,395 litres).

Skoda prides itself on providing 'really useful' stuff — and they do. Take the two position rear parcel shelf-cum-rigid luggage cover, for example: it can be set at a halfway point where it provides a usefully deeper shelf in the boot down behind the rear seatbacks and, at the same time, creates a separate closed-off lower storage area taking in half the boot area — segregating your boot in this way usefully boosts practicality.

In its standard configuration there's a drop down to the boot floor over the mid-thigh level loading sill. On the boot floor itself there's a repositionable semicircular 'corral' that fits either side of the boot and which can be used to ring-fence fragile objects or bottles. However, if it's just a single bottle of Glenfiddich you've bought then there's a stand-alone bottle holder ready and waiting on one side of the boot; on the opposite side is an open bin.

Naturally there are folding bag hooks, and stretchy nets of varying sizes to ensure everything stays precisely where you place it. Elsewhere nice touches abound, from the holder for your smart phone that fits into the dual cupholder on the centre console, 1.5-litre bottle-holding front door bins, the ice-scraper handily stored on the inside of the fuel filler flap, loads of cabin storage including pull-out drawers built into both front seat bases, and the parking ticket holder on the screen.

New Fabia hatch prices start at just Ł10,600; for not much money at all you can make it even better both from an eye-candy perspective as well as comfort and handling. Our test car's eye-catching paintwork scheme of bright yellow topped with a metallic black roof and door mirror 'skins' adds Ł785; the superb front sports seats are a must-have and at Ł175 you'd be crazy not to have 'em); sports suspension costs just Ł120; while the 'BEAM' black alloy wheels, so much cooler than the standard alloys, are just Ł150 more.

Living with the Fabia day-to-day is easy-peasy — the air conditioning is efficient; the driving position spot-on; you start and stop the engine simply by pressing the button on the steering column where once you inserted the ignition key; rear parking sensors are supplemented by parking graphics on the touchscreen to make reversing easier; and if you prefer to do it the old fashioned way — looking over your shoulder — well, that's also a piece of cake thanks to the excellent all-round visibility.

Driver assistance features include a Speed Limiter, Electronic Stability Control that uses an electronically-controlled differential (improves handling and steering particularly when rounding corners), Front Assistant (audio/visual warning of an impending collision that, should the driver fail to respond, initiates braking to minimise any possible impact. Fabia's safety credentials are underscored by its five-star Euro NCAP crash test rating. Oh, and did we mention the optional Driver Fatigue feature? It warns the driver when to take a break — but you'll have to buy your own KitKat!

All in all this extrovert new Fabia is very easy to like: it's comfortable, practical, easy to live with, fun to drive and pokey when asked but when it comes to visiting fossil fuel forecourts it's also commendably conservative. — MotorBar