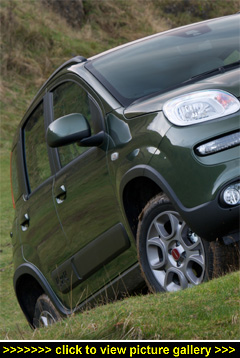 “People just love Pandas. Not just
the cuddly black-and-white variety
but the Fiat kind. But you don’t
have to be a fan to have four-wheel
fun in the new third-generation
Panda 4x4...”

THOSE IN THE KNOW understand that no matter how supersized (and expensive) your 4x4, when it comes to tricky conditions, especially mud and snow, you can never really cheat the laws of physics…

Sometimes, however, it's a little less, not more, that gets you through. Once, at a particularly demanding off-road event, I watched a diminutive Lada 4x4 not only gamely go places that had some of the best and most expensive bogged down, but even pull one out that was stuck fast in the porridge-like quagmire.

Today that plucky off-road hero might turn out to be a Fiat Panda 4x4. It has 16cm of air between its undercarriage and the ground, the maximum angle of gradient that it can approach without any part of its bodywork touching the ground is 20 degrees, and its breakover angle at the top of a hill is also 20 degrees.

At the heart of the 4x4 is a sophisticated permanent all-wheel drive system that employs two differentials and an electronically-controlled coupling governed by an electronic control unit. It doesn't matter if that doesn't mean much to you because the system doesn't need any driver input — it's completely automatic.

In normal dry conditions, 98% of the torque is transferred to the front wheels, so the Panda 4x4 handles in a very similar way to a front-wheel drive model, plus there are no increases in fuel consumption and tyre wear.

Two choices of propulsion are offered: an 875cc two-cylinder TwinAir petrol engine pumping out 85bhp, and which comes mated to six-speeder manual 'box; and a 1.3-litre diesel that comes with an slick-changing five-speed manual gearbox and 75bhp.

Apart from drinking from different pumps, the real difference between them is their torque, something crucial to off-road ability — the two-pot petrol generates 107lb ft at 1,900rpm; the diesel, as expected, a much gutsier 140lb ft at a usefully lower 1,500rpm. On that basis, the diesel unit is the more appropriate powerplant for those Panda drivers with a yen to go exploring off the beaten track.

On tarmac, the power figures translate to a top speed of 103mph and a zero-to-62mph time of 12.1 for the TwinAir petrol and 99mph and 14.5 seconds for the diesel. Of course, diesel being diesel the fuel economy in real-world driving will be better too.

Officially, neither has a drink problem: the petrol can average 57.6mpg; the diesel 60.1mpg. A Start&Stop system and a Gear Shift Indicator help drivers keen to maximise their fuel economy. A week's hard driving saw an average of 52.2mpg — pretty damn good for a 4x4.

For obvious reasons we decided to put the 1.3 MultiJet through its paces. To land one on your drive will cost you Ł14,950. Before parting with any money, you should know that the Panda 4x4 does have one very big trick up its sleeve — it makes a great city car too. So suddenly you're getting two cars for the price of one!

Equipped to tackle life in the rough, its tweaked suspension and extra wheel travel also works fine riding over broken and potholed roads while still keeping the driver and passengers comfortable. Speed bumps, in particular, are treated with a soft-sprung disdain and might as well not be there.

Not only that, but the higher-than-normal driving position and tallish glasshouse together makes for fine all-round visibility (helped by a wide rear screen) — another big plus for keeping your head in cut-and-thrust city traffic as well as no-fear parking. Plus, thanks to its standard-fit Dualdrive power steering, you can press the switch for 'City' mode to make manoeuvring simple and take the strain of all that never-ending twirling that driving in town usually involves.

Ramping it up out of the city limits, the Panda 4x4 holds its line well with minimal body lean through bends — a pleasant surprise is that you can carry your speed with you on winding roads and make good point-to-point progress. Turns out that this Panda 4x4 is more satisfying to drive than you would have guessed.

The diesel's gutsy mid-range shove means it's easy keeping up with traffic; it's also flexible in the higher gears at lower speeds or when you've had to lift off. It also feels mechanically easy at the legal limit — its 'natural' cruising gait feels to be about 80mph. Most of the time you don't really notice it's a diesel — only by its 50+mpg!

City car-sized externally (3.68 metres long and 1.67 metres wide) it might be, but the five-door body is very practical — especially when compared to some other city runabouts. For a start, there's masses of headroom.

From behind the wheel the 4x4 looks very much like a standard Panda, notably because it shares its square-themed detailing that styles everything from the instruments, the headrests and even the steering wheel having a 'squared' look. Hard to describe but best seen — check out the pictures.

Along with a commanding view of the road, Panda 4x4 drivers also get the same user-friendly fascia and controls as other Pandas, with trim materials that feel like they'll last. A nice touch — our test model came with a green dash facing that perfectly matched the external green paintwork and added to the cabin's smart and breezy ambience.

The black multifunction steering wheel adjusts for height but not reach (actually not a problem) and gives a clear view of the dials. A button on the right stalk cycles the driver info display through all the important stuff: range, average mpg, trip distance, etc. The gear lever is set in a raised centre console alongside your left knee that puts the gearknob very close to your left hand — so no stretching every time you change gear.

The well-padded, two-tone front seats are big and supportive, particularly for upper back and shoulders and are set high off the floor to provide good lower leg comfort. For the record, we covered over 500 miles in our Panda 4x4 in three days without a single ache between us, which says a lot.

The front windows are electric, as too are the door mirrors, and there's one-shot auto up/down operation for the driver. And, as on the stock Panda, the 4x4 has the same 'paddle' style handbrake; it works exactly like a traditional handbrake but at first encounter looks like it will be awkward to use — in fact it's easy-peasy and requires minimal effort. The best thing about the Panda is that control-wise everything is very intuitive — you can just jump in and drive.

Staying connected at the wheel (even more important if you're far off the beaten track) is high on most drivers 'must have' features list. The Panda 4x4's Blue&Me infotainment system permits Bluetooth equipped devices such as phones and MP3 music players to be connected to the car's sound system, controlled by voice activation via a display panel that works with a microphone in the roof, or steering wheel-mounted buttons so hands stay where they should be — safely on the wheel.

Rear seat passengers won't feel hard done by despite only getting wind-up windows = they work smoothly — although average sized adults may find their knees brushing the front seatbacks. However, the seating is well-padded and comfy and it's light and airy back here, plus the views out through the deep windows are good.

Nice also to be able to drive along with the windows open on a summer's day without getting hit by enough turbulence to 'blow the bloody doors off' (as Michael Caine — The Italian Job — might say). Kids will love the multi-pocketed organiser on the driver's seatback.

Talking of which, an abundance of storage compartments with a fair-size glovebox and a large open tray above it and a 'hidden' tray under the gearlever console will help keep your cabin shipshape.

North of the rear bench's backrest you'll find a well-shaped boot; at 225 litres it's not huge, but still one of the largest luggage compartments in its class and it will easily take a full family weekly shop. The loading sill is mid-thigh but the tailgate opens high.

A space-saver spare is stored under the boot floor. Fine on-road although off-road a full-size one would be more reassuring. Fold down the 60:40 rear seatbacks — they drop almost flat although there's a step-up from the boot floor — and you can cram in 870 litres.

The front passenger seat can be fitted with an optional fold-down backrest that can be used as a table for picnics or as a worktop. It also lets you carry (with the rear seats folded) items more than two metres in length.

Well worth the Ł50. Worth a mention is that to prove the new model's capabilities, a pair of Panda 4x4s took part in a daring drive that began in Kathmandu (Nepal) and ended at Mount Everest's base camp. It was the first time that a small off-road vehicle had reached this base at an altitude of 5,200 metres.

What made the feat even more extraordinary was that the only modifications were to the Panda's engine control unit to adapt it to the local fuel. After that, a blizzard in the UK should be a drive in the park! — MotorBar