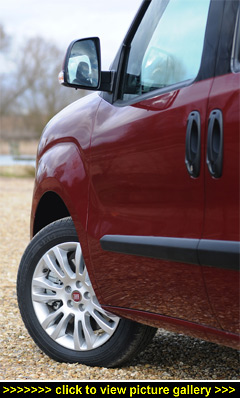 “A decade after going on sale and
with over a million models sold,
the Fiat Doblo is still regarded first
and foremost as a workhorse MPV.
Practical it undeniably is, but that
doesn’t make it perfect...”

Nobody will pretend it's a pretty people-mover or a smile-inducing sports utility vehicle, but equally there's no doubt the five-door, five- or seven-seater Doblo delivers when it comes to all-round practicality and purpose — it does a lot of things very well and where it matters for many users.

The newest range extends to eight models based on the same 'square' body style on a 2.75m wheelbase with an overall length of 4.39m and providing from 790 to a massive 3,200 litres of luggage or cargo space.

There are three new petrol and diesel engines, all more powerful, economical and cleaner than the previous generation power units and reviewed here is the best-selling 105bhp 1.6 diesel. The other new powerplants are a five-speed 95bhp 1.4 petrol and a 135bhp 2.0 diesel.

Buyers can choose from three trim levels: Active, Dynamic and Eleganza. They can also specify two additional rearmost seats if they want a seven seater. Prices, with the new 20% VAT rate, go from Ł12,830 to Ł17,545 for manual transmission models.

Get into a Fiat Doblo and it's like entering a cathedral; airy and a little impersonal. But you quickly appreciate everything that comes to hand and foot plus you'll you find more spaces and compartments than you can hide a priest in.

The big seats are very comfortable with a good adjustment range in the front; in the back they fold easily and quickly plus there's excellent access courtesy of the rear sliding doors.

At the tail you'll find what's probably the biggest fifth door of any people carrier on the market; opening from knee-height it accesses a flat loadbed and that enormous maximum 3,200-litre carrying capacity.

Under the bonnet, the 1.6 diesel engine was a good starter, pulled well and seemed very flexible even if you had to stir it along when loaded. I know the official fuel consumption figures suggest the Doblo will return on average 54.3mpg but I managed only 42mpg on test even with the new Stop-Start engaged and following the suggested change points on the fascia dial.

In give and take motoring the Doblo covered the ground with ease and composure although it stills rolls around tight corners at speed and wallows over some sections of road. It did, commendably, soak up potholes and bumps very well, a good thing given the on-going deterioration of our roads.

The steering was well geared for turning in town but seemed a little lacking in feel on twisting roads. Brakes are strong and progressive, and the handbrake held it securely on a steep test slope.

Secondary controls and instruments are conveniently placed and easy to understand, the air conditioning is efficient, lights bright and the wipers cleared the enormous screen without leaving any problem blindspots. Refinement is okay: on the move you could hear the suspension coping and there was some noise emanating from the four-cylinder, MultiJet turbodiesel but wind noise, surprisingly, was low.

In it's favour, the Doblo is functional, financially attractive, roomy and comfortable. Against that are its odd looks, body roll and wallow and suspension and engine noise intrusion.

While a conventional mainstream MPV could be a better bet for many would-be owners, the enduring comment of anyone who travelled in the Doblo was how spacious and comfortable it was. And that must mean a lot to many buyers, apart from the taxi drivers who seem to snap them up at every opportunity. Hail to the new Doblo! — Robin Roberts