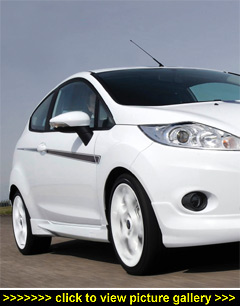 “The perfect car for a round trip to
Wales for a ride in Ford’s world rally
car alongside Jari-Matti Latvala
turned out to be… a Ford Fiesta!”

THERE ARE A LOT QUICKER DRIVERS than me but, as compensation, I've been rewarded with some great fun being driven at speeds well over my own capabilities.

Some high points have included a high-speed trip through the Scottish Highlands with Christian von Koenigsegg in his eponymous car, a ride in James "There is only one way to go: flat-out" Sutton's Porsche Carrera Cup car and, most recently, a very different experience — a ride with Jari-Matti Latvala who drives for the BP Ford Abu Dhabi World Rally Team and who gained a stunning second place in the 2010 FIA World Rally Championship.

The projectile — a Ford Focus RS World Rally Car; quite a mouthful but also quite a stunning missile of a car (or what little of the original is left after spending Ł500,000+ on modifications).

The venue was a former Wales Rally GB stage in a Welsh slate quarry — and what a ride Jari-Matti gave me there! These rally drivers are born different; they can take a car through the very toughest and roughest conditions for hour after hour and still come back for more.

My ride was over very quickly but it seemed like an age, the same as when you are in deep trouble with a car way out of control and seemingly no way back.

Last time I had ventured so far west I felt persecuted by endless speed traps; with policemen hiding behind parked cars, trees and motorway bridges in addition to the now ubiquitous cameras.

It seemed a good idea not to tempt fate twice so, as I was travelling to a Ford 'experience', I thought I would keep it 'in the family' and so requested a "Ford Fiesta with an economical engine" for the 500-mile round trip. My recollections of old were of a small car that would not even offer a challenge to the speed traps…

My, how things have changed. No longer a small runabout; more a respectable family touring car with plenty of space all around. When I collected the Fiesta, being male I simply sat in it, had a quick look at the layout and drove away reckoning that it would all come out in the wash.

The traffic from Hounslow was surprisingly light and so I happily made my way without a care in the world, trying to work out how the voice-activated bits of kit worked. Glancing at the speedometer I had a shock — the quietness of the car had masked my speed; thankfully no cameras were passed.

Recalling the alloy wheels and wide tyres — the latter created the only noise — this was definitely somewhat up-scale from my request as it had all the bells and whistles. Certainly the acceleration was lively (zero to 62mph in 9.9 seconds) and the ride firm, more akin to a large-alloyed BMW than expected.

People make up their own minds about the styling of cars: some are real head-scratchers — the Mercedes SLS, for instance, is gratuitously porcine by my way of thinking. Even more so when I first saw the bare bones of its Lotus Elan-style backbone as that just begged for a low, stunningly-sleek modern body.

However, I had no problem with the Fiesta's looks although I thought the finish of the seats looked rather basic — but who can complain when they were still comfortable after a three-hour journey?

The further I drove the more I discovered; all mostly to my liking except the bonus of all four windows being powered off-set by awkwardly-sited switches on the driver's door. The one thing missing was cruise control and would have been useful as the engine note was muted...

Somewhat embarrassingly, I found those controls on the steering wheel once I reached home!

Leafing through the handbook, I also discovered that I'd been driving a Fiesta Titanium 1.6 Duratec with 118bhp and 112lb ft of torque — a useful amount of power without incurring a penalty from the insurance company.

So much for my request for a small Ford with an economical engine. Having got something with a bit more bite than anticipated, I decided to see what I could achieve by taking a prudent — but not boring — approach to the driving. You can travel on motorways endlessly and miss out on the character of the countryside so I generally try and make a compromise when time permits; taking an 'A' route where there are sure to be found interesting diversions.

The M4 mileage was thus pared down, whilst we somehow managed an extra 200 miles (where did they come from?) on minor Welsh roads. Even so, our average consumption was 37.8mpg. Mind you, on Sundays in deepest Wales open petrol stations were not a common sight. A more than light touch on the accelerator was needed as the tank needle was hovering on zero with a range of less than 10 miles indicated. Thankfully the gauge was accurate; finding out how to open the petrol cap was another embarrassing moment.

I feel sure the marketing department at Ford must have debated long and hard on carrying over the Fiesta name. For people like me it is the wrong name as my recollections would have, incorrectly, disqualified it as far too small. That noted, I believe the Fiesta has won a great many loyal repeat purchasers who recognise exactly where the new models have reached.

How many of those loyal owners would look to other brands if the name was changed is debatable. Only Ford knows the answer to that one. Nevertheless, whatever perceptions the model name conjures up for you, do give it try as you too may well be favourably surprised… but best to do a little homework with a brochure on the features before you fire up the engine. — John Steel