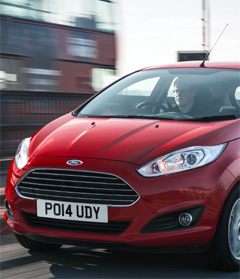 “The Ford Fiesta has been the best-
selling car in the UK for the past
five years. Now its appeal has been
improved by an optional new six-
speed Powershift automatic gearbox
for both the three- and five-door
1.0-litre EcoBoost hatchbacks...”

THE 1.0-LITRE EcoBoost three-cylinder direct injection turbocharged petrol engine already accounts for nearly half of all UK Fiesta sales because it delivers the same power as larger engines but with reduced CO2 emissions and better fuel economy.

The new six-speed, dual-clutch autobox is electronically controlled for seamless gearchanges plus it can be used in fully automatic or sports mode — or gears can be selected manually. Downsides? Well, compared to a five-speed manual 'box model it does bump up the price by Ł1,250, the fuel economy is slightly less, and the CO2 emissions are higher.

A 1.0-litre 99bhp (100PS) EcoBoost engine with a manual gearbox will officially return 65.7mpg with CO2 emissions of 99g/km which means your road tax is free every year.

However, specify the auto and the fuel consumption drops to 57.7mpg and CO2 emissions go up to 114g/km so while you still don't pay any road tax the first year, subsequent years will cost you Ł30. For company car drivers the manual version incurs an 11% rate of Benefit-in-Kind tax but because of the auto's higher CO2 emissions this rises to 14%.

Economy may be different but both the manual and auto versions have the same performance figures: a maximum speed of 112mph with zero to 62mph acceleration in 11.2 seconds.

I have just had a spell in one of these new autos in the more popular five-door body. This Titanium X version costs Ł17,995 before you add in a few useful worthwhile options such as the Sony navigation system with DAB radio/CD and Ford SYNC communication system (Ł400) and front parking sensors that cost an extra Ł150.

It's a formidable array of specification and, despite the price, it is proving most popular with customers. At this level, and with the new automatic transmission, the restyled Fiesta is a small car but one endowed with all the functions and refinement of a much larger car.

And for a 'supermini' the Fiesta's ride comfort is first class, the handling sharp and responsive — and it's very easy to see why it's the UK's best-selling car.

Another appealing feature is the range of fuel- and CO2-efficient turboed EcoBoost petrol engines on offer through the range. They might be small in capacity but they produce more power and torque than the larger capacity engines they replace.

For instance, the 99bhp (100PS) three-cylinder unit I drove has won numerous global awards, including International Engine of the Year in 2012.

Three-cylinder direct injection petrol engines are fairly commonplace today as manufacturers strive to meet the legal requirements to lower exhaust emissions. The Ford unit, just the size of a box of A4 printer paper no matter which version or power output is chosen, is remarkably smooth with no customary 'three-pot' coarseness during acceleration or lumpiness at tickover.

Marry that smoothness with the new slick-acting, twin-clutch automatic transmission and it's a happy union. Having six ratios suits this torquey 125lb ft engine even though maximum torque is developed at a relatively high 4,100rpm.

The six closely stacked ratios means no power delivery fall-off between gearchanges; and the right ratio is always swiftly engaged when pressing the accelerator to move on from slow or medium speeds. The low first gear ratio can be a little harsh engaging from standstill but the upside is that it delivers crisp acceleration from the off. On motorways the tall sixth gear ratio provides relaxed cruising with a minimal increase in engine noise.

Unlike many other small petrol engines I've tried, this unit does not feel stressed when worked hard to maintain motorway speeds or when driving up steep hills because the twin-clutch auto 'box simply drops a 'cog or two' to maintain momentum.

And fuel economy? After a full week's test on mostly rural A/B roads, a short motorway trip and some stop/start driving, my overall figure was 41.2mpg — a long way short of the official 57.7mpg Combined Cycle figure. This will not please some owners or meet their expectations but, given the performance and refinement, it is realistic. Those drivers with fuel economy on their minds will have the potential to achieve a better figure but my driving was 'real world' and more or less what I expected.

As for the latest Fiesta itself? The most recent styling updates have given it a more premium appearance and it certainly doesn't look a small, cheap runabout. Inside, the quality looks and feels improved to some extent but the controls and buttons mounted on the upper central part of the fascia look a mess and are difficult to use and to understand.

They've been like this since the car was first launched and the same design is used on other Ford models. Another long-term gripe is the small, recessed information/SatNav screen — it's too far away from the driver and at times difficult to see.

Good reasons to buy a Fiesta include it being the best looking and best handling supermini with the best ride comfort; and the best small-capacity petrol engine — now available with a slick automatic transmission. That aside, you may not like the small SatNav display screen or some of the fiddly controls, and the fact that the auto option pushes up not just the price but also the running costs.

All in all these are relatively minor issues and should not detract from the overall praise the Fiesta receives from the Media and by the customers who buy thousands of them. For many Fiesta buyers the new auto gearbox will be the icing on the cake. — David Miles