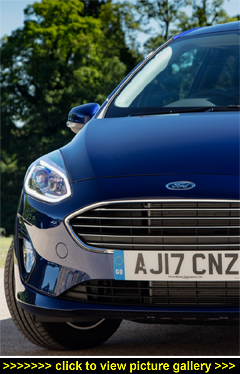 “It might look familiar but then
that’s not really surprising
because it’s Ford’s all-new Fiesta...”

AND FOR THE PAST EIGHT YEARS the Fiesta has been Britain's best-selling car. Now being replaced by an all-new seventh generation range of three- and five-door hatchbacks priced from Ł12,715 to Ł21,225, the new range kicks off from Ł1,080 less than the outgoing version — although most versions do show a modest price increase reflecting the higher levels of standard specification.

Last year 120,525 Fiestas were registered in the UK, putting it again at the very top of the UK's Top Ten new car sales chart — and by a huge margin. In second place, with just over 77,000 sales, was Vauxhalls Corsa while the Ford Focus was third with 70,500 registrations.

Although the latest generation Ford Fiesta looks more or less the same, everything is new or uprated although it still uses the highly-rated Global B platform. The new Fiesta is 70mm longer and 13mm wider, 20mm lower, and the wheelbase has been extended, albeit by just 4mm. However, all of these small increases add up to more interior space and a slightly larger 292-litre boot in keeping with the latest generation of new supermini models such as the Polo from VW, the SEAT Ibiza, Nissan Micra and Renault Clio. For the record, fold down the Fiesta's rear seats and this goes up to 1,093 litres.

The new Fiesta offers two chassis set-ups: softer settings are used for the most popular Style, Zetec and Titanium spec levels plus the new highest-specced Vignale while the sporty ST-Line gets uprated suspension settings. Further suspension changes will be made for the high-performance ST model and the Fiesta Active crossover versions due next year.

The suspension is new but still with a MacPherson strut front-end plus a new twist-beam rear axle; the front track is wider by 30mm and the rear by 10mm.

The outgoing mainstream versions of the Fiesta were famed for their class-leading compliant and comfortable ride, balanced handing, precise and predictable front-end grip and overall agility. These new settings and wider tracks ensure that the latest Fiesta is even better in all those areas.

As to engine choices, these include Ford's award-winning EcoBoost 1.0-litre three-cylinder turboed petrol engines, with the option of 100, 125 or 140hp power outputs. There's also the choice of new naturally-aspirated 70 or 85hp 1.1-litre three-cylinder petrol units. Diesel customers haven't been forgotten either, with 85 and 120hp 1.5-litre turbodiesel engines. The gearbox choices are five- and six-speed manual (depending on the engine chosen) with an optional new six-speed torque converter automatic on the 100hp EcoBoost petrol models.

The single best-selling version in the new Fiesta range will be the Zetec 5-door 1.0-litre EcoBoost 100hp turbo petrol with Stop/Start and a six-speed manual gearbox — priced at Ł15,445.

From launch the new Fiesta will be available in Style, Zetec and Titanium specification trims plus Titanium X, B&O Play Zetec and B&O Play Titanium sub-variants. ST-Line, ST-Line X and Vignale versions will come on-stream in October 2017 followed by the ST sports version and Active crossover models in Spring 2018.

Externally the new Fiesta's design is similar to the last generation — and that's no bad thing. It's still fronted by the familiar trapezoidal grille with swept-back headlight units and a rising waistline side-profile over sculptured door panels. At the tail the horizontal light clusters (mounted in the tailgate and rear quarter panels) give the hatchback a classier look.

The flared wheelarches covering the wider front and rear tracks also give it a more sporting and purposeful appearance; ST-Line models get a bodykit which includes a deeper front and bumpers, side skirts and a tailgate spoiler.

Although the outgoing Fiesta could happily hold its own with newer competitors in the exterior styling department, its interior was looking dated, was of poorer quality and lacking in the fitment of the latest infotainment, communication, driving safety and convenience support systems.

Inside is where you'll see the most significant improvements — and not just the extra space. Whereas the previous models had become dated in their appearance and quality with scattered controls, low-resolution information screens and rather drab trim, the new Fiestas have a far more modern, upscale and sophisticated look and feel to them — if not class-leading, they're at least on a par with the latest competition.

There are still areas of hard plastic trim and the door pulls are not the most appealing but they're no worse than other brands in this sector. The new 6.5 or 8-inch centrally mounted high-resolution colour tablet-style touchscreens are mounted proud of the fascia and bring a more modern look to the cabin.

There's also a wide range of standard specification levels and personalisation options available, and models from Zetec upwards get Ford Sync 3 software as standard while the optional Ł300 B&O Play 10-speaker system further enhances the sophistication on offer. Emergency Assistance and lane departure warning plus auto-headlights, Bluetooth and steering wheel controls are standard; other safety options include cross-traffic alert (Ł475) and autonomous braking within the cruise control function (between Ł200 and Ł500 depending on the model).

Well worth adding to the Zetec is the optional Ł300 City Pack which includes rear parking sensors, powerfolding heated door mirrors and puddle lights and, for Ł300, a built-in SatNav. However, I would object to paying Ł175 for the electric rear windows for the five-door Zetec model as these really should be fitted as standard.

The list of add-ons seems endless but as always it's worth selecting the extra items with care otherwise the price becomes unrealistic at which point upgrading to a Titanium version which, with the 1.0-litre EcoBoost 100hp engine and five-door body, costs Ł16,795 against Ł15,445 for the same engine and same body combo but with lower standard Zetec spec.

I have just been driving the 100hp (98bhp) 1.0-litre three-pot EcoBoost turbo petrol model with the six-speed manual gearbox, in five-door Zetec spec which, as already noted, costs Ł15K.

It's as easy to drive as before but straightaway you notice a new refinement and calmness in its overall performance. The added sound insulation not only reduces engine noise significantly but road noise intrusion is much less. It feels throughout a much more grown-up and sophisticated small family car.

The turbo engine is perky for response with the six-speed's ratios making the best use of the 125lb ft of torque available from just 1,500rpm. Top speed is 113mph and the zero to 60mph acceleration time is 10.5 seconds. The Combined Cycle fuel economy is 65.7mpg — driving around urban and traffic-busy rural roads I recorded a healthy 52.2mpg. Impressive too is the low CO2 emissions figure of 97g/km, so the first year's road tax costs Ł120 after which it's Ł140 annually.

Throughout its past generations Ford's Fiesta has always been the benchmark car for ride comfort and handling in the supermini sector. The new wider tracks, new suspension, torque-vectoring handling and well-weighted power steering together enhance the overall driving pleasure.

The ride is compliant, it's comfortable for open road cruising, nimble in town traffic and it hasn't lost any of its past abilities to provide fun motoring when the mood takes you.

In almost every department — looks, spec, performance, price and running costs — the 'best' just got a whole lot better and remains the benchmark supermini against which competitors have to be judged. ~ David Miles