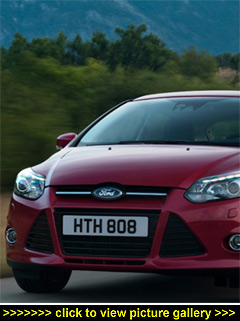 “At the European press launch for
the new global Ford Focus held
in Spain where, I can confirm, the
rain in Spain did fall mainly on
the plain (in the Jerez region), the
all-new five-door Focus hatchback
was put through its paces...”

THE TEST CARS came fitted with the choice of two engines. First was the new 1.6-litre EcoBoost 179bhp (182PS) direct injection turbocharged petrol engine which the UK gets in June but only in Zetec S specification and at a price yet to be announced — expect it to be around Ł20K.

The second driving option was the 2.0-litre TDCi 160bhp turbodiesel unit. Neither engine is likely to be a main seller in Britain but both these high-power units gave us the best opportunity to test the credentials of the new global C-segment Focus.

Prices for the new Focus five-door hatchback start at Ł15,995 and rise to Ł23,995. The estates arriving in June will be priced from Ł17,095 to Ł25,095. These prices are between three and five per cent more than those of the comparable outgoing versions but the new models are far better equipped with cleaner and better performing engines, carry higher VAT and also have high-tech systems either as standard or as options. These include such things as an automatic low speed braking and stop system, active park assist, a lane-keeping aid, blind-spot information, distance control and torque vectoring control. There are also automatic dipping headlights, DAB radio, auto lights and wipers and much, much more.

In theory this is a car that, if legislation allowed, could drive itself — that's how much integrated technology is in the new Focus.

This is the first time this sophisticated technology has appeared in a family-sized C-segment, car even from so-called premium brands — driving aids such as found in the all-new Focus are usually restricted to the luxury and executive sectors and the likes of the BMW 7 Series, Mercedes S-Class and Audi A8.

It is inevitable that many of today's motorists will continue downsizing due to the ever-increasing cost of motoring. Motorists have moved from D segment to C-Segment cars and C-segment cars to B-segment superminis, and so on. Ford's aim with the Focus is to satisfy existing Focus owners but also to capture those moving down from larger cars. These people will still expect the room, comfort and the refinement of their previous larger cars.

There will be a few moans and groans that the Focus has, perhaps, lost its outright superiority in the 'sharp' handling department, but it is now decidedly more comfortable and roomy and much improved for overall driving refinement and travelling comfort.

The suspension irons out potholes with ease and any noise intrusion from the wheels or engine is now very low. However, the electronic power steering implemented to reduce energy consumption, whilst accurate, is not as sharp and doesn't offer enough feel or feed-back for spirited driving. But for most new Focus customers, it will not be an issue.

The new Focus showed a high degree of cornering grip even on wet and muddy winding roads, and the car felt really well balanced. I just wanted a bit more communication with steering responses. On the plus side, the sophisticated traction control and torque vectoring differential systems, operating in conjunction with the ABS braking, performed really well. I know there is plenty of front-end grip — I just wish I could have felt it a bit more through the 'woolly' steering.

The interior quality is hugely improved with soft-feel finishes for the dashboard, centre console and steering wheel. The new Focus' cabin feels 'crafted' rather than just assembled and well in tune with its potential to be classed as a 'premium' car. All the instrumentation appeared to be logical once I'd become acquainted with it, and our test cars had many of the advanced technology options fitted to them which took some understanding and getting used to — but they certainly work to make driving safer.

Styling-wise, the Ford 'Kinetic' design programme has been continued from the Fiesta, new C-Max and Grand C-Max models. So much so that the Focus looks like a larger version of the Fiesta. Its sharp angular lines blend well with its muscular stance and coupe side profile.

At 2,648mm, its wheelbase is 8mm longer so rear seat legroom is improved. However, the back seats are still better suited to two rather than three adults although three children will feel comfortable.

The thick front A-pillars (just like on the Fiesta) and the large door mirrors do reduce front-quarter visibility on bends and road junctions, and the rear tailgate window is not the largest in this sector. The aerodynamics of the new Focus seemed to drag all the road dirt onto the rear tailgate so the rear wash/wipe system was in full time use during my test drive.

The two engines on offer at the European media launch were clearly chosen to prove the vehicle's dynamic capabilities. As already mentioned, they will not be the main sellers but they certainly showed what the new Focus is capable of.

The EcoBoost 179bhp 1.6-litre, four-cylinder, direct injection turbocharged petrol engine puts out 177lb ft of torque from 1,600rpm and 199lb ft in 'overboost' from 1,900rpm. As such, it's a very good example of the development in downsizing in modern engines — as already demonstrated by BMW, MINI and PSA with their similar technology 1.6-litre petrol engines — and to get this much performance from a 1.6-litre unit is remarkable.

The Ford EcoBoost unit revs freely and thrives on being driven enthusiastically and, thanks to the torque, it's not sluggish to respond from low speeds. Top speed is 138mph with 0-62mph taking 7.9 seconds. The official Combined Cycle fuel economy is 47.1mpg although over a 90-mile route of winding roads my test car only returned 31mpg. The CO2 emissions of 139g/km will mean a road tax bill of just Ł110 a year.

The second unit on offer was the 2.0-litre TDCi four-cylinder turbodiesel — like all Focus diesel units, it's been further developed and improved. Power output is 160bhp with 250lb ft of torque from 2,000rpm. Top speed is 135mph, 0-62mph takes 8.6 seconds and the Combined Cycle fuel consumption is officially 56.5mpg.

My test drive over the same route as the petrol model returned 46.6mpg. CO2 emissions are 129g/km so road tax for the First Year rate is Ł0 and thereafter Ł90 per annum. This unit pulled more readily from lower speeds but lacked the willingness of the petrol unit at higher rpm speeds.

Both engines tested were mated with six-speed manual gearboxes. The one used with the petrol engine is the latest generation and was slick in operation and light to use. The unit used with the diesel engine is older technology and while it can accommodate more torque, the gearchange action was not as smooth.

For: Better looking, better built, high quality 'crafted' interior, masses of driving support technologies, very comfortable. Against: Dull steering — for some people, the superb ride comfort has been obtained at the expense of its former sharp and agile 'best in class' handling.

Initially, I'm impressed; mostly by the vastly improved travelling comfort and refinement the new model brings to market and the quality of its 'crafted' interior. And it looks good, too. — David Miles