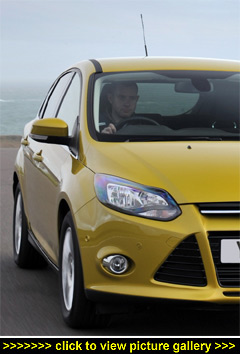 “In 550 Ford of Britain dealerships
around the UK, the all-new Ford
Focus five-door hatchbacks are
ready and waiting for customers.
Prices start from Ł15,995...”

THIS IS THE FIFTH GENERATION Focus since the original was launched in 1998 and to date 10 million of them have been sold worldwide — 1.4 million of them bought by British buyers, making the UK Ford's largest single market for the Focus.

This latest Focus will be one of ten different model ranges to use Ford's new 'C car' platform, with two million being produced worldwide. Already this year Ford has launched the new C-Max and Grand C-Max MPVs, both of which use the new platform.

Ford has introduced the all-new Focus hatch with a choice of three petrol and four diesel engines — and there is a simplified range of equipment levels; Edge, which will account for 20 per cent of sales; Zetec 55 per cent; Titanium 17 per cent; and Titanium X with 8 per cent.

In addition, there's a huge array of new technology extra-cost options that, if chosen by customers, will make these the most technically-advanced mainstream Focus cars ever.

Up until now this smart technology has not been readily available for cars in the Focus class — BMW, for instance, offer some of these functions on their 7 Series, but priced from Ł1,110 upwards.

The starter Edge version costs Ł500 more than the outgoing model but has added equipment worth over Ł1,000 now fitted as standard. Other versions show price increases of between three and five per cent, some of which is the result on the increase in VAT but the rest reflects the extra equipment and new engine technologies.

The petrol engine line-up confirmed so far is 1.6 TI-VCT with 103/123bhp power outputs and the new 1.6 EcoBoost 147bhp unit (with a 1.6 EcoBoost 179bhp unit arriving in June). Both these engines have Start-Stop. Diesel engines are 1.6 TDCi 93/113bhp with Start-Stop and 2.0 TDCi with 138/160bhp outputs. Powershift twin-clutch auto transmissions are available for both 2.0-litre TDCi units.

With the price of diesel fuel now considerably more than petrol, Ford expects the domination of diesel sales for Focus to weaken and to become a 50:50 split between petrol and diesel with the 1.6-litre petrol and diesel units being the most popular overall.

Ford says that after taking the purchase price, VED road tax, BIK company car tax and fuel consumption into account, retail buyers or fleet users covering over 15,000 miles a year will find the diesel version slightly more cost-effective to run. Lower mileage users will most likely go for either of the petrol units with the new 1.6-litre turbocharged direct injection EcoBoost version having increasing appeal because it offers performance or fuel economy modes depending on the mood of the driver.

The benefit of the 1.6 TDCi turbodiesel 113bhp unit is that it is available right across the hatchback's specification range with prices starting at Ł17,495 for the Edge version and topping out at Ł21,245 for the Titanium X variant.

The 1.6 EcoBoost 147bhp petrol unit is available only with Titanium and Titanium X levels of 'spec' with prices of Ł19,745 and Ł21,245 respectively — exactly the same price as the 1.6-litre TDCi models with those specifications.

During my brief test driving on Scotland's winter-ravaged roads, the 113bhp 1.6-litre TDCi unit returned an impressive 58.9mpg — for some fairly sedate but still realistic speed driving — against the official 67.3mpg figure.

The CO2 emissions are 109g/km — mysteriously too high to make it exempt from the London Congestion Charge but low enough for VED road tax to be Ł0 in the First Year and only Ł20 per annum after that. With a top speed of 120mph and zero to 62mph taking 10.9 seconds, performance was workmanlike.

Driven over the same test route, the 147bhp 1.6 EcoBoost direct injection turbocharged petrol engine returned 42.3mpg — down on the official 47.1mpg. Its CO2 emissions are 139g/km so VED road tax is Ł110. Top speed is 130mph and 0-62mph acceleration 8.6 seconds — the zippier performer when required but with the potential for getting very good fuel economy without compromise.

However, for some low mileage buyers the best option will remain the slightly slower 1.6-litre TI-VCT 103 or 123bhp petrol units, both quoted as returning 47.9mpg and with marginally lower CO2 emissions of 136g/km than the 1.6 EcoBoost petrol unit. VED charges are the same but the purchase prices are lower, starting at Ł15,995.

Unfortunately this 1.6 TI-VCT engine was not available for testing at the launch — disappointing as it will figure highly with financially hard-pressed private drivers. For any owner covering less than 15,000 miles a year it offers the best financial option with the lowest purchase price in what has become a relatively expensive range of family cars. On a positive note, residual values for the new Focus are 6 per cent higher than for the previous models.

As for the styling, well the Ford 'Kinetic' design programme has been continued from the Fiesta and new C-Max and Grand C-Max models. Indeed, the Focus looks like a larger version of the Fiesta. Its sharp angular lines blend well with its muscular stance on the road and the coupe side profile. At 1,484mm high, 4,358mm long and 1,823mm wide (without mirrors), the new five-door is 16mm lower, 21mm longer and 16mm narrower than the outgoing Focus.

However, its wheelbase is longer (at 2,648mm) so rear seat legroom is better. That said, the rear seats are still better suited for two rather than three adults but three children will feel comfortable. Incidentally, boot and load space with the mini-spare wheel is 316 to 1,101 litres.

The thick front A-pillars — just like the Fiesta — and the large door mirrors do reduce front-quarter visibility on bends and road junctions and the rear tailgate window is not the largest in this sector.

The interior quality is hugely improved, with soft-feel finishes for the dashboard, centre console and steering wheel. And inside, the new Focus feels 'crafted' rather than just assembled and compatible with its potential to be classed as a 'premium' car.

All the instrumentation appeared to be logical (once I had become acquainted with it) and our test cars had many of the very advanced technology options fitted to them, which took some understanding and getting used to but they certainly do work to make driving safer.

The Zetec level of specification looks the best and most sensible option to me; the upper centre console of the Titanium version looked too complicated, with low-rent plastic finishes and small push-buttons. Also, Zetec models on standard 16-inch alloy wheels 'ride' much better than the larger 17 and 18-inch ones.

There will be a few moans and groans that the 'global' Focus has lost its outright superiority in the sharp handling department; nevertheless, it is decidedly more comfortable and roomy and much improved for overall driving refinement. The suspension now irons out most potholes and any noise intrusion from the wheels or engine is very low.

The electronic power steering (adopted to reduce energy consumption), whilst accurate, is not as sharp and doesn't offer enough feel or feed-back for spirited driving but for most customers it will not be a consideration — I would have preferred bit more communication with steering responses. There is a high degree of cornering grip and the car feels well balanced and the sophisticated traction control and torque vectoring differential systems operating in conjunction with the ABS braking perform really well.

The good news? Better looking, better built, crafted high-quality interior, a mass of driving support technologies and comfortable. Against? Looks pricey, dull steering and some people will consider that the ride comfort has been obtained at the expense of its former best-in-class sharp and agile handling. — David Miles