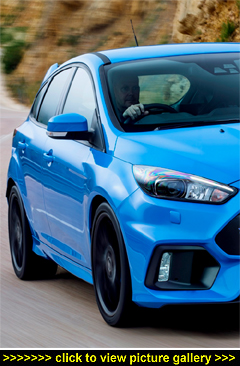 “It’s been a long time coming...
In fact, Ford said there would never
be another RS. But with hardcore
machinery such as Audi’s RS3, the
Golf R, BMW M235i, Honda’s Civic
Type R, and the AMG A45 from
Mercedes already out there burning
rubber, Ford’s RS ‘Rally Sport’ just
couldn’t stay away...”

OVER 3,000 UK customers have already confirmed their RS orders — place yours before May (when the price goes up by a grand to £31K) and you'll have one on your drive by the end of the year.

The good news is that the prices of the optional extras will not be going up. So far 91% of UK customers have chosen the Ł1,000 Luxury Pack which includes powerfold door mirrors, rear parking sensors, Ford KeyFree, cruise control and privacy glass.

The same number have also ordered the Ł465 Ford Sync2 navigation and premium sound system. Recaro skeleton sports seats have also proved popular at Ł1,145 and have been ordered by 50% of customers, while 21% have ticked the box for the Ł575 tilt-and-slide sunroof.

Of the five most popular colours, 61% have chosen Nitrous Blue with 15% opting for Frozen White just ahead of Shadow Black — the choice of 10% of early UK buyers. 85% have ordered the optional (Ł100) blue-painted brake callipers and 84% have gone for the 19-inch black forged alloy wheels which add another Ł595 to the price.

At launch, without these options, the RS was priced at an impressively competitive Ł29,995. Even after 1 May the new price of Ł31,000 is not that expensive given the performance and spec of this five-door, family-sized hatchback that's becoming known as 'the people's supercar'.

Just as impressive as the price and the huge amount of early sales to customers is the RS's performance and specification. The 2.3-litre, four-pot turbocharged petrol engine is an uprated version of the unit powering the new Ford Mustang.

With a stronger cylinder head, larger twin-scroll turbocharger, a huge intercooler and a large-bore exhaust system, the unit now pushes out 345bhp and up to 346lb ft of torque in a 15-second overboost mode from 2,000rpm (normal use torque output is 324lb ft). Mated to a six-speed manual gearbox, the RS runs to 165mph with zero to 62mph acceleration taking 4.7 seconds, making it the fastest-ever RS.

The RS also has Ford's new Performance All-Wheel Drive system which includes brake-based Dynamic Torque Vectoring for optimum handling and high cornering speeds. The AWD system took two years to develop and it shuffles driving torque front-to-rear to the wheels with the most grip needing the most power. Up to 70% of maximum driving torque can be delivered to the rear wheels, and of that 100% can be delivered to either of the rear wheels through a twin-clutch system in the rear differential.

There are four performance driving modes: Normal or Sport for on-road driving; Track or Drift modes for track use. The car also has launch control and sports suspension with stiffer spring rates (increased by 33% at the front; 38% at the rear) and more efficient roll bars over those used for the Focus ST.

The suspension also has two modes: Normal and Sport, the latter being 40% firmer for track driving. A linear input electric power steering system, rather than the variable-rate system used for the Focus ST, is adopted to improve response and feel.

And the most powerful brake system ever fitted to an RS model is used, with 350mm front ventilated discs and Brembo four-piston callipers plus 302mm discs at the rear. Ford together with Michelin have developed 235/35 R19 Pilot Super Sport tyres for everyday use.

Performance Fords have never been subtle with their styling and the RS is no exception with an aggressive body kit fronted by a large mesh-covered grille with a much deeper front bumper and splitter; large cooling vents funnel the air to the radiator, oil cooler and brakes. Along the flanks are ground-hugging side sill skirts and at the tail is a large spoiler and diffuser punctuated by a pair of huge tailpipes.

Sync2 connectivity provides access to audio, navigation, climate control and voice control for mobile phones, and there is an 8-inch touchscreen for the optional SatNav and rearview camera functions.

Other items of standard kit include a Start/Stop engine button, heated windscreen, heated power door mirrors, electric windows, hill start assist and tyres pressure monitoring — there's no spare wheel but you do get a tyre repair kit. Boot space is relatively small at 260 litres but with the rear seats folded you get a 1,045-litre loadbay.

Although the Focus RS retains its potential to be a family car at weekends and a business car during the week, it adds real performance for any use — including trackdays. From low revs right up to 6,000rpm and beyond, the turboed 2.3-litre engine provides smoothly progressive, linear power delivery.

It's not as harsh or peaky as some highly-stressed 2.0-litre turbo units; in fact, it almost feels like a refined, normally aspirated engine — which is perfect for a family car which doubles as a sports car or a trackday machine.

While a top speed of 165mph and zero to 62mph in under five seconds is impressive, even better is the way the RS handles day-to-day driving in the UK. At low speeds it can be docile; drop a cog and it accelerates without lag, and it cruises quietly with ease.

The uprated six-speed manual 'box has a short-throw, precise gearchange action with well chosen ratios. Top gear edges towards an overdrive to provide reasonable fuel economy and to help with CO2 emissions.

Officially the RS's Combined Cycle fuel consumption is 36.7mpg and test driving on busy but wet winding North Cotswold country roads the real-life figure was 27.8mpg for a mixture of mid- to slow-speed driving and a few periods of 70mph cruising on dual carriageways. A spell on the Stowe handling facility at the Silverstone Circuit brought that down to 20mpg.

On road or on track the overall handling of the RS, with its clever four-wheel drive system, is one of balance, poise and predictability during both straight-line acceleration and fast cornering. This system negates massive high-speed cornering front-end understeer leading to rear-end oversteer by transferring driving torque to the rear wheel with the most grip. The result is 'fast-in, fast-out' cornering performance even in the most extreme conditions when cornering forces of up to 1g can be experienced.

Sport mode can be harsh for general road use, and ride comfort, not unexpectedly, is on the firm side — poorer road surfaces send a 'patter' through the car which could be tiresome on a long journey. However, the trade-off is that the handling remains composed over ruts and bumps during cornering. Overall the steering and handling are precise and body-roll is minimal.

With its four driving modes the RS offers a lot of performance for a lot of uses. This is perhaps best confirmed by Ford's entry of two Focus RS cars in the 2016 FIA World Rallycross Championship, albeit with power boosted to 591bhp. If it's not a motorsport winner, the RS will still be a sales winner.

Exciting and refined to drive with very high performance in terms of outright speed and secure handling with AWD traction, the RS is totally usable as both a high-performance everyday family car and a trackday ride.

Even in the hands of non-motorsport owners the RS has the ability to entertain. In its simplest form just switch into Sport mode, where drivers can enjoy the sound of the engine's pops, burbles and bangs through the tuned exhaust system. It really is a 'people's supercar' — and at a super price. ~ David Miles