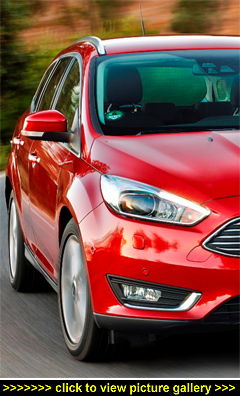 “The Focus nameplate is the best
selling in the World — over 12 million
sold since it was launched in 1998
as the Escort replacement. Today
Ford builds a Focus every ninety
seconds and they are sold in over
140 countries worldwide...”

CLOSER TO HOME, last year the Focus was the UK's second best-selling model after the Blue Oval's own supermini, the Fiesta. A total of 85,140 Focus models were sold in the UK in 2014 while its main competitors — the VW Golf and the Vauxhall Astra — notched up UK sales of, respectively, 73,880 and 59,689.

Now we have a refreshed Focus in both five-door hatchback and five-door estate bodystyles priced from Ł17,295 for the hatch and Ł18,395 for the estate — but as we know, Ford's new prices at dealerships are always negotiable.

There is the choice of Studio, Style, the best-selling Zetec, Zetec S, Titanium and Titanium X specification levels and there are, of course, a wide range of high-tech driver support and higher spec extra cost personalization options.

In addition to the mainstream variants there are also the higher performance ST versions in either hatchback or estate body styles with 2.0-litre 250hp EcoBoost petrol or 2.0-litre TDCi 185hp turbodiesel engine options and prices from Ł22,195 to Ł27,095.

Just announced for arrival in 2016 is a third-generation Focus RS five-door hatchback powered by a 320hp turbocharged petrol engine with all-wheel drive. The price is an estimated Ł30,000.

For now, the latest mainstream Focus models are available with a wide range of engine choices to meet new lower emissions regulations.

In addition to the award-winning 1.0-litre EcoBoost 100 and 125hp petrol units there are two other new powerplants: the 1.5-litre EcoBoost turboed petrol (with either 150 or 182hp), and the main-selling fleet unit, the 1.5 TDCi 150hp turbodiesel.

Both of these engine sizes offer more power, lower CO2 emissions, and better fuel economy than the old 1.6-litre units. And fuel efficiency improvements are up to 19% better compared with the outgoing models although currently there is a limited choice of engines mated with automatic transmissions.

I have just had a spell in the top-selling version ('top' because of its popularity with fleet, business users and high-mileage retail customers), the Ł19,495 Zetec five-door hatch powered by the new 1.5-litre 150hp four-cylinder TDCi turbodiesel with Start/Stop and a six-speed manual gearbox that returns an official 74.3mpg with 98g/km.

Retail customers who cover a lower mileage are likely to choose the 120hp 1.0-litre turbocharged three-cylinder petrol unit (60.1mpg and 108g/km) that with the same Zetec specification costs Ł19,895. However, private buyers do tend to favour the higher Titanium trim and that, with the same engine choice, is priced at Ł21,395.

The design for the latest generation Focus is more of an evolution — a lower, wider stance makes it look more athletic and the new bonnet, grille, chiselled front headlights and elongated fog lights all look very neat. A coupe-style roofline lowers at the rear, while the rising waistline theme is finished off with a roof-mounted spoiler.

Inside, much of the change has come about from customer feedback — the controls and switches are now far less cluttered and more intuitive. My test Focus had the optional DAB/navigation (an extra Ł500) fitted and it comes with an eight-inch touchscreen rather than the standard and fiddly to use 4.2-inch display.

Bluetooth and emergency assistance features are fitted as standard. There is also a new centre console with improved storage, which also acts as an armrest.

Thicker carpets and side window glass with improved engine bay insulation are claimed to lower noise intrusion, although the low-speed growl and resonance from the new 1.5-litre diesel unit was noticeably louder than I would have expected.

Surprisingly, cruise control is an extra cost option on Zetec level and in fact doesn't come as standard until near top-of-the-range Titanium versions. With the Zetec trim level expected to be the most popular with fleet and high-mileage business users who are the most likely to 'do the cruise', leaving this feature out is a bit mean, as too is the lack of electrically-operated rear windows.

Apart from the improved fascia layout the most noticeable improvement for both the driver and passengers is the much better ride comfort — the seats are really comfortable and offer good support. The space for rear seat passengers still isn't as good as the VW Golf or indeed its Skoda stablemate, the very roomy Octavia.

The ride compliance of the Focus has always been its strong point and the latest versions are even better. It might not be as sharp in the handling department as the Golf but it offers much more comfort and the interior is visually better and the specification generally higher. Overall in its sector, if you want the best driving car (or the best car to be driven in), then the Focus is hard to beat as too are the real-world transaction prices at UK dealerships.

As for the new 120hp 1.5-litre turbodiesel, it gives you more power from less cubic capacity with higher performance, better mpg and lower CO2 figures. Apart from its low speed resonating growl, the new unit is relatively refined. Power delivery is linear with up to 199lb ft of torque delivered from 1,750rpm.

The well spaced ratios in the six-speed manual gearbox help this new engine to be responsive when needed and docile during stop-start or 'crawling' low-speed traffic conditions. Top speed is 120mph and the zero to 62mph acceleration time is a reasonable 10.5 seconds.

For a mile-munching workhorse this new engine suits the Focus well. Officially it will return 74.3mpg in the Combined Cycle — my week-long test resulted in a disappointing real-life 58.2mpg. I say 'disappointing' only because the official figure looks so good on paper. In fact I was perfectly happy with my test car's consumption.

On a longer motorway journey the average jumped to 63.4mpg but fell back again once I resumed driving on country A/B roads. With CO2 emissions of 98g/km, road tax currently costs Ł0 but note that the forthcoming March Budget will most likely increase this.

The latest Focus might no longer be universally accepted as the 'top-dog' in its very competitive sales sector but given its refreshed exterior styling, much improved interior and fascia layout, improved seat comfort, more comfortable ride, well balanced handling, lower emission engines and low running costs, it's still the benchmark model against which others are judged. — David Miles