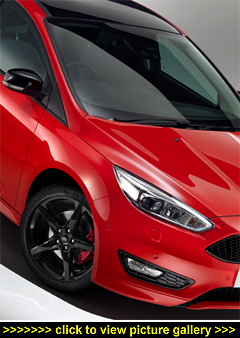 “For 2016, Ford are introducing a
number of ‘colour’ editions of their
most popular models; the Ka, Fiesta,
B-Max and Focus. In the case of
the Focus — a model range which
found 83,816 UK customers last year
— there are now Zetec S Red and
Zetec S Black editions...”

THE NEW FOCUS ZETEC S RED EDITION features a Race Red exterior and contrasting Panther Black roof, black mirror caps and black grille surround. However if black is your colour of choice then you can instead have a Black Edition — it simply reverses the combination with a Panther Black exterior, Race Red roof, red mirror caps and red grille surround.

The Black editions wear a different style of front bumper with a rear diffuser beneath it. Both Red and Black versions will also deliver a sportier driving experience thanks to a lower sport suspension featuring front and rear springs stiffened by approximately 10%, tuned shock absorbers for enhanced body control, and a front anti-roll bar optimised for front-end grip and turn-in performance.

Available only in five-door bodystyles, customers can opt for either a 179bhp (182PS) 1.5-litre EcoBoost turboed petrol engine delivering 127g/km CO2 and 51.4mpg or a 147bhp 2.0-litre Duratorq TDCi turbodiesel with 105g/km and 70.6mpg. Both models are stick-changers with a six-speed manual gearbox.

Apart from its really good, purposeful sports styling inside and out, the highlight of these new petrol versions is the latest 1.5-litre EcoBoost, direct injection, turbocharged petrol engine which develops a strong 179bhp.

This 179bhp powerplant, plus the sports styling, allows the family car owner to retain the always useful five-door bodyshape but to have more 'grunt' readily available for those occasions when fast driving can be enjoyed without comprising the car's practicality. As such it's a really good option for motorists who cannot justify owning one of the Focus high-performance ST or RS versions — plus, of course, it's much cheaper.

The new engine develops a healthy 177lb ft of torque from 1,600rpm, but due to its high gearing (for reasonable fuel economy and decent CO2 emissions) it's best kept above 2,000rpm if you want the sharpest acceleration response. Making the UK's legal 70mph cruising speed easy work is a naughty-but-nice 138mph top speed. Getting off the line to 62mph takes 8.2 seconds.

So long as the driver is happy to fully use the six-speed gearbox to keep the engine in its optimum powerband, it's a joy to drive. The downside is the real-life fuel economy: officially this unit should return 51.4mpg in the Combined Cycle but during my week-long test driving covering motorways, country A/B roads and a few short trips into my local town the figure maxed-out at just 37.4mpg. That said, a 200-mile motorway/dual carriageway cruise did see the figure rise to 40.3mpg but local driving reduced that considerably.

In its defence my very new test car had only covered 600 miles when it was delivered to me and more miles on the clock should see it loosen up and the fuel economy improve. With emissions of 127g/km owners will not pay any road tax in their first year with the car but from the second year it will be Ł110. A ray of good news: insurance is rated at Group 19E; well below the 34+ rating for ST versions.

The Focus has always been the best in its class for agility and sharp handling whilst retaining a comfortable ride. And even with the lowered sports suspension and larger 17-inch wheels the Red Edition's ride remains compliant and only a little firmer than the standard ride quality.

The exterior of the Red version attracted more comments about a new car than I have received for a long time — and the interior is just as striking thanks to the sports front seats complete with red stitching that's carried over to the handbrake gaiter and leather-bound steering wheel. Alloy sports pedals and door sill guards add to the sporty theme.

A major improvement is the optional eight-inch SatNav screen which really enhances the look of the standard Focus fascia panel and gives a real 'lift' to the perceived quality of the car.

The 179bhp Focus Red Edition is as good as it looks; a first rate family car with quite a bit of extra performance to brighten those dull motoring days.

Even so the real-life fuel consumption was well below the official figure and the engine lacks response below 2,000rpm and needs to be 'worked' to get the best sports performance.

Accept the foregoing and the Red Edition offers keen drivers a willing new engine and agile handling without sacrificing its proven family hatchback virtues including that compliant ride. — David Miles