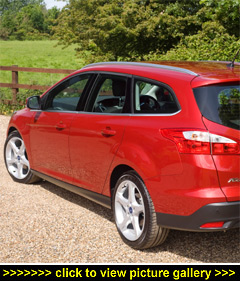 “This week a Ford Model T and
the first new Ford Focus Estate sat
side-by-side to celebrate Ford’s
centenary — and these two ‘global’
Fords are also due to appear at
Goodwood’s Moving Motor Show
and Festival of Speed being held
from 30 June to 3 July...”

ONE HUNDRED YEARS AGO, in October 1911, the first UK-built Model T came off Ford's Trafford Park production line in Manchester. In all, over 16 million Model Ts were built worldwide — more than 300,000 of them at the UK plant, which manufactured the various versions until August 1927. Development of the Model T in the USA started in 1907 and production began in 2011 at a purpose-built factory at Highland Park, Michigan. Eventually Model Ts were built in 23 factories around the world, making it Ford's first global car.

Early Model Ts took 12 hours 28 minutes to assemble because they were hand-built. But demand was so strong that Ford developed the moving assembly line and this reduced production time for each Model T down to 93 minutes and, eventually, one every 10 seconds — which resulted in the price of the car going down and the workers' wages up.

The Model T Torpedo/Runabout used for the Centenary media events is the second oldest British-built Ford car in existence and was produced at the company's Trafford Park assembly plant in Manchester.

When Ford bought the original Dagenham Motors dealership in 1999, this vehicle was found on the inventory and is now part of the Ford heritage collection. In 1997, the vehicle completed a London-Geneva run without a hitch.

Capable of 42mph, courtesy of a 2,890cc, four-cylinder, side-valve petrol engine, the Model T has two forward gears and one reverse gear.

The engine is fired-up by means of a starting handle which needs four rotations; one to prime each cylinder with fuel which uses a gravity fed supply. There is a hand throttle to control the speed, engine advance and retard controls to vary the optimum ignition timings for going up hills or cruising on the flat and a mixture screw to vary the fuel flow.

Like today's manual transmission cars, the Model T has three floor-mounted pedals but their roles are very different.

The left pedal is depressed to engage the forward gears, fully depressed for low range and then released for its high gear. The engine's high torque output allows the Model T to run from walking pace to 42mph in high gear — plenty fast enough given the conditions of the roads and tracks and the performance of the brakes.

The high-off-the-ground body, with 20-inch wooden spoke wheels shod with pneumatic tyres, gave plenty of ground clearance in an age where surfaced roads were scarce with most journeys taking place over what were unpaved cart tracks.

Fast forward one hundred years... Following on from the all-new Ford Focus five-door Hatchback models introduced earlier this year, the German-built Estate versions are now arriving in the UK with prices from Ł17,100.

At its launch the new-generation Focus was heralded by Ford as a global car. For economies of scale, the company is no longer going to design and manufacture niche models to suit local tastes; in future their models will have global appeal. The same strategy as served the Model T so well 100 years ago.

The Focus Estate line-up mirrors the Hatchback with a full range of low-CO2, economical 1.6 and 2.0-litre petrol and diesel engines with Edge, Zetec, Titanium and Titanium-X trim and equipment levels. The most popular engine will marginally be the 1.6 turbodiesel TDCi 115PS (113bhp) with its 67.3mpg consumption and 109g/km of tailpipe emissions. The most popular trim level will be the Zetec, which is expected to be specified by 55 per cent of customers.

Ford will sell around 90,000 Focus units in the UK this year — 35,770 have already been registered plus the new Estates are expected to grow their traditional 15 per cent of total Focus sales to 18 per cent as demand for family-sized estate cars continues to grow.

The new Estate shares the same wheelbase with the five-door Hatchback models but the overall length has increased to 4,556mm to incorporate an impressive 476-litre boot with the rear seats in use and a cavernous (certainly in this lower-medium size sector) 1,502-litre loadbay with the seats folded.

Like the Focus Hatchbacks, the new Estate offers first class comfort and compliant road holding and the high build quality is very much 'new-age' Ford.

My full first-drive road test, including driving the 'hill climb course' at the Goodwood Festival of Speed, will follow shortly but having just had a brief spin in one prior to the event, I can confirm that the new Focus Estate is just as gifted in all areas as the new Focus Hatchback.

In addition it's classy looking, refined and provides roomy family and work transport. The only fly in the ointment is that it's getting pricey, especially with the advanced technology options.

The wide range of Focus models more or less guarantees that there will be a version for most customers, whether they live and work in the UK or Europe or globally. Evidently Ford's global model policy appears to be working just as effectively in 2011 as it did one hundred years ago in 1911. — David Miles