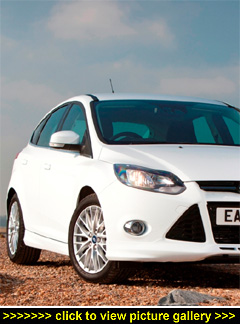 “You won’t be able to buy Ford’s
long-awaited turbocharged Focus
ST five-door hatch until July 2012;
but if it’s a sportier-looking Focus
you’re after, you don’t have to wait
that long — the virtually identical
Focus Zetec S looks just as sharp...”

YOU CAN BUY A ZETEC S with one of four engines — two petrol (123bhp 1.6 and the 'halo' 177bhp turboed 1.6 EcoBoost) and two turbodiesels (113bhp 1.6 TDCi and 160bhp 2.0 TDCi). For the record, the latest technology petrol engines deliver much improved economy and lower CO2 emissions — and they're cheaper to buy.

Whatever your preferred power, if you want your sporty-looking Focus now rather then next summer then you should seriously consider the cheaper turbocharged 177bhp 1.6-litre EcoBoost.

Priced at Ł20,494, this turboed petrol engine drives through a six-speed manual gearbox to deliver a 138mph top speed along with zero to 62mph acceleration in 7.9 seconds. Quick enough for most. Officially, the Combined Cycle figure is 47.1mpg with impressively low — given the power and performance — CO2 emissions of 139g/km. You'll pay Ł115 a year for your road tax and business users will fork out Benefit-in-Kind tax of 17%.

Driven as quick and as fast (legally) as possible over the busy winding roads around Goodwood, I saw 36.5mpg; a spell hammering the same car around the Goodwood racing circuit knocked this back to 28.6mpg — the worst mpg figure you're ever likely to see.

If speed is on your mind, liberal use of the gearbox is needed to keep the engine spinning in the long-legged fifth and sixth gears. However, the joy of this unit is its free-revving character: the maximum 177bhp is delivered at 5,700rpm.

At 177lb ft, and available from 1,600 through to 5,000rpm, peak torque looks good on paper. Overboost from 1,900rpm sees this temporarily increase to 199lb ft — ideal for an extra short boost to whip past slower traffic.

However, the tall gearing does stifle the midrange urge and in this particular area the 160bhp/250lb ft 2.0-litre TDCi turbodiesel unit is more responsive — and better suited for quickly overtaking 50mph traffic, despite having a marginally slower 0-62mph acceleration time.

Price-wise, the Zetec S with this 160bhp diesel unit costs Ł850 more but the road tax is the same. Miles travelled per gallon are also better than for the petrol: over the same test route the 2.0 TDCi returned 46.5mpg against its official 56.5mpg figure.

So, a horses-for-courses decision. To make choosing harder, both engines are first rate. While the diesel seems more in tune with our congested roads, the EcoBoost petrol felt very much at home driven very hard in third and fourth gears on the Goodwood circuit — on the track the engine thrived on its revs, while the turbocharger provided an ongoing strong, smooth and constant power delivery.

The exterior body styling kit boasts a unique front spoiler and splitter, lower sill extensions, sports rear bumper and rear tailgate spoiler and makes the Hatchback really very attractive. Keen drivers will be pleased to discover that it's not just good in the looks department — it delivers dynamically on the road, too.

There's no question that the new Ford Focus is the finest handler there is in its market sector. It's beautifully balanced and very predictable, and the changes to the suspension have resulted in even tighter control with plenty of grip from the front wheels during very fast cornering.

It helps that the Zetec S gets a lowered sports suspension featuring stiffened springs and dampers — it's now 28% 'stiffer'. This does, of course, firm up the ride although not so much as to make it uncomfortable; even the bigger 17-inch wheels don't seem to amplify road noise or vibration from poor road surfaces into the car.

For? This is the sportiest Focus currently on offer (at least, until the ST arrives) and it's fun to drive thanks to good performance and tight and predictable handling with lots of grip. It's also relatively economical with low tax and it looks great.

Against? Our only niggle was the tall gearing that dulls midrange engine response for overtaking pace.

While the new ST version due next summer is a model I'm eagerly awaiting, this Zetec S with the new 1.6 EcoBoost petrol engine is a good option for those who just can't wait another six months. — David Miles