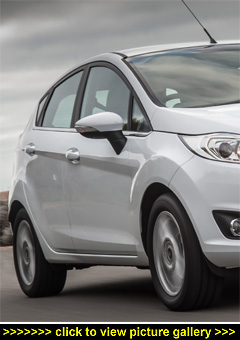 “Ford’s Fiesta has been the UK’s
best-selling car since 2009 and was
Europe’s top selling small car in
2012. Despite the economic gloom,
the weather and more competition,
last year European customers
bought a new Fiesta every two
minutes...”

FIFTEEN MILLION CUSTOMERS can't be wrong: that's how many Fiestas have been sold across 62 countries worldwide since 1976 when the very first one saw the light of day.

The UK is the most successful of all European markets for Fiesta sales and the love affair just goes on and on. At the beginning of the year (2013) the Fiesta received its mid-life update and UK sales are again on the up, keeping the Fiesta at its number one position in the UK's top ten new car sales chart.

With more and more motorists downsizing, carmakers have made their smaller cars roomier, given them 'larger car' specifications, packed them with more sophisticated technology, made their engines more fuel- and CO2-efficient — and have made them more stylish and desirable.

The latest Fiesta is a good example of these improvements. Gone is the dumpy styling — the new 2013 model year Fiesta's new bonnet and nose is unquestionably much more stylish.

The new Fiesta face is dominated by a trapezoidal front grille (very Aston Martin in looks) bracketed by laser-cut headlamps with LED daytime running lights. It also features a power-dome bonnet design and is offered with 17-inch alloy wheels. It's also more colourful, coming in a range of bright, eye-catching colours including new Copper Pulse, Hot Mustard and Candy Blue.

Ford has relocated the electric window and heated seat switches and interior door handles in the new Fiesta. And, depending on the specification level chosen (Studio, Style, Zetec, Zetec S, Titanium, and Titanium X), a leather-rim steering wheel is offered for the first time as well as a new five-inch central colour display that supports the model's first integrated SatNav. Range-topping 180bhp ST three-door sports versions will be topping the range shortly.

The latest Fiesta's fascia features a high-gloss finish for the upper instrument panel and lower centre console which is replicated on the door panels. A satin-chrome detailing finish is also offered along with Ford's signature Ice Blue lighting to illuminate dials, switchgear and displays. Not so enlightening, the numerous fascia switches remain cluttered and are not that logical to use.

The latest Fiestas also offer improved storage (boot/load space is 295 to 979 litres) including a concealed load space beneath the boot, which has an adjustable floor height to simplify loading.

The additions and changes don't stop there because the new Fiesta is Ford's first car in the UK to feature their MyKey technology — this, for instance, enables parents to place restrictions on younger drivers to promote safer driving. MyKey allows personalization where the top speed can be limited to 80mph; and its Speed Minder alert function can be programmed to sound at 45, 55 or 60mph to improve speed awareness (it has a maximum audio limit, if desired, of 45% of the maximum volume).

Furthermore, the traction control cannot be disabled, a persistent seatbelt reminder audible alarm is included, it has an earlier 'low fuel' warning, stops the parking aid being turned off and also prevents Active City Stop emergency braking being disabled.

Some might see this as a 'big brother' (or even 'big momma') intervention, but if it stops youthful recklessness and bad road manners and improves safety and helps reduce insurance costs then it's no bad thing.

Ford has also equipped the latest Fiesta with Ford SYNC — a voice-activated in-car connectivity system and SYNC Emergency Assistance, which directly connects the vehicle occupants to local emergency operators after an accident in the UK and Europe.

Also on the Fiesta's improved 'goodies' list is Active City Stop which can automatically help avoid or mitigate low speed collisions. These are all big car features, and important additions for a small car.

But the real star performers of the line-up are Ford's award-winning 1.0-litre, three-cylinder 99 or 123bhp turbocharged EcoBoost petrol engines. Both produce 99g/km of CO2 so they're road tax exempt (with just 10% BIK) and both also officially return 65.7mpg.

New Fiesta model prices range from Ł9,995 up to Ł17,545 but we know the actual price paid can be lower than that, especially when the new range has been on the road a bit longer. The three-door ST versions will cost from Ł16,995. Pick of the line-up I consider to be the 1.0-litre EcoBoost 100 (99bhp) five-door with Zetec spec and which costs Ł14,345.

That noted, a spare wheel will add Ł95 and the worthwhile DAB radio/CD and Ford SYNC package will cost an extra Ł300 — whatever, it's worth haggling to get the best overall deal. Electrically-operated windows and door mirrors, on-board computer and AirCon are all standard fit items for Zetec models.

The 1.0-litre EcoBoost 99bhp engine gives out a muted three-cylinder growl during acceleration; all part of its charm. But don't be put off by its small capacity. It's one of today's modern turbocharged direct injection petrol engines that break all the old rules about 'size equals performance'.

With a top speed of 112mph and zero to 62mph acceleration in 11.2 seconds, the 999cc engine belies its small capacity — in fact, this level of performance is all that most motorists actually need. The 123lb ft of torque, delivered from only 1,400rpm, also makes it impressively flexible at low speeds.

At high motorway speeds, even with four adults aboard, it cruises with ease. The only time you realise this is a one-litre engine is up steep hills — a quick trip down a cog in the five-speed 'box is all that's needed to keep the engine in its rev band and pulling.

Officially this engine will return 65.7mpg in the Combined Cycle. The best my test car returned — on a long motorway journey — was 48.7mpg. The average over seven days, taking in long and short trips and commuter stop-start driving, was 44.4mpg — well down on the official EU laboratory-obtained figures. However, even with this significant shortfall, 44mpg from a petrol engine is impressive enough, especially as there is no road tax to pay and there's no performance penalty.

Most buyers will not find it worthwhile paying the extra Ł1,050 to move up to the 123bhp version of the same engine but with Zetec S specification. Both units significantly out-perform, in all ways, the Fiesta's older 1.25-litre four-cylinder petrol unit and although the five-door Zetec 81bhp 1.25-litre version is cheaper to buy (at Ł13,345), its poorer performance, lower fuel economy and higher road tax really make it a non-starter.

The latest Fiesta has lost none of its best-in-class handling and ride comfort — qualities that have made it year-after-year the best performing affordable 'supermini' on the market; today it remains the benchmark model in this sector.

With its new styling the Fiesta now looks a more sophisticated and up-market vehicle on the outside and generally the interior looks and feels good as well — everything today's motoring downsizers and downpricers want.

Reasons to buy are that it's the best five-door supermini by far, has a brilliantly responsive petrol engine, low running costs with no road tax, a stylish new front-end design, a comfortable ride and high tech safety features either as standard or available as an option.

On the downside you'll have to live with cluttered fascia controls, a tiny, recessed information screen — and a spare wheel that costs extra. That said, if something could be done to de-clutter the switchgear on the centre console and increase the size of the recessed information screen, that would be all that's needed to make the new Fiesta the perfect family hatch. Even so, it's the best supermini by far... and we still have the high-performance ST versions to come! — David Miles