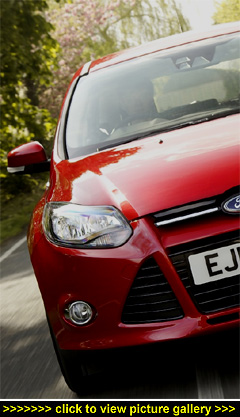 “If you drive, your pocket will
continue to be hit by escalating tax
bills and fuel prices, fuelled by the
UK Treasury needing ever-more
‘easy’ revenues and EU emissions
regulations getting ever-tougher.
Clearly, downsizing is here to stay...”

FORD ARE DOING THEIR BIT to help the motorist — for instance, they already have lower emission Econetic and Ecoboost technologies for diesel and petrol engines but now their new Ecoboost 1.0-litre, three-cylinder turbocharged petrol engine with 99 and 123bhp power outputs has become the industry benchmark for downsizing.

And one in four of the new Ford Focus Hatchback and Estate models to be sold in the UK will be ordered with one of these new British-designed 1.0-litre, three-cylinder, Ecoboost powerplants.

Already this new Ford unit — with a cylinder block (width and length) the size of an A4 sheet of paper — has been voted 'International Engine of the Year' by 76 Journalists from 35 countries around the world. Fresh from its debut in the new Ford Focus range, it will shortly be added to the C-Max and new B-Max MPVs and, eventually, the Fiesta.

Focus 1.0-litre Ecoboost prices start from Ł16,445 for the five-door hatch and Ł17,545 for the estate. The price premium for the new 1.0-litre three-pot Ecoboost petrol engine over the 1.6-litre four-pot units the newcomer replaces is just Ł250. Spec-wise there are Edge, Zetec, Zetec S, Titanium and Titanium X levels of equipment.

The power outputs of the new units (99 and 123bhp) are the same as the equivalent old 1.6-litre engines but there are significant improvements in performance and fuel economy (combined cycle 58.9/56.5mpg). And all with lower CO2 emissions (109 and 114g/km) which, of course, means much lower road tax.

At the UK press launch Ford pointed out that in the past UK customers traditionally bought a model of their choice based on engine capacity because if you wanted to impress then 'size mattered'. But high taxes and fuel prices have changed all that; now an increasing number of buyers look at engine efficiency in terms of power output — but with lower tax gathering emissions.

So selling the idea that a 1.0-litre engine is better than a 1.6-litre unit isn't now as hard a job as in the past; in fact, Ford are finding that once a customer has actually driven a Focus with the new 1.0-litre Ecoboost unit they have no reservations and are sold on the idea of owning the latest fuel-saving technology engine. And 60% of customers trying the new engine are buying it — nearly double the sales conversion rate of other Ford models.

Being the International Engine of the Year is a huge sales boost. But three-cylinder petrol engines are not new — the Japanese were using them more than 25 years ago for their city cars; even back then some were turbocharged and had multi-valve cylinder heads but they were all multi-point, fixed timing fuel injection units.

Ford's new engine is even more compact and combines variable valve timing with direct multi-phase fuel injection. Plus the latest turbos, instead of supplying a rush of boost pressure high up the rev band, can offer a more linear and progressive boost from very low engine speeds; 1,400rpm in this new Focus unit.

My brief 1.0-litre, triple-cylinder Ecoboost first drive was in the 123bhp version (the 99bhp engine arrives shortly). Having read a few of the early reviews and heard the comments of colleagues who had already undertaken the first appraisals, I was not disappointed in any way. Actually, I was even more impressed.

Admittedly, three-cylinder engines are traditionally not as smooth as 'fours'; they have a throaty roar to them during acceleration, and they are not that responsive. If we're honest, fuel economy and lower emissions are generally achieved at the expense of realistic performance.

However, the new Ford 'triple' sets new standards: the engine is smooth with little vibration and while there is a slight change in engine note during hard acceleration, it's not a sound of stress.

It's also responsive and offers good flexibility without too many gearchanges from low speeds right through the mid range thanks to the wide torque band provided by the electronic mapping, variable valve timing and the turbo's linear boost.

Let me not be seen to over-praise this new engine — it's no ball of fire. But it's no slowcoach either, and still better than many larger capacity non-turbo four-pot petrol engines. Top speed is 120mph, zero to 62mph takes 11.3 seconds and it cruises effortlessly and quietly at the UK's legal limit — all with CO2 emissions of just 114g/km.

Where Ford might have a few battles still to win is with the fuel economy expectations. Officially, the 99bhp version will return up to 58.9mpg and the 123bhp version 56.5mpg. These days it's rare for owners to come close to the official laboratory-obtained figures during real-life driving, so meeting expectations may be an issue which Ford has to deal with.

My 123bhp Focus Hatchback test car, during two test drive sessions, returned 42mpg against the expected 56.5mpg. This was racked up on some 70mph motorway sections, 50mph-limit A and B country roads and a small amount of sub-30mph stop-start urban travel.

Ford's 1.6 TDCi diesel in the Focus will easily beat that — and it only costs Ł850 more than the new 123bhp 1.0-litre Ecoboost petrol engine in the same model.

The 99bhp Ecoboost version is Ł1,350 less than the 1.6 TDCi so that unit probably makes more sense for low-mileage drivers.

Diesel engines are not dead yet — but admittedly the reason to buy one today, with such good new small capacity petrol engines readily available, is much weaker.

Reasons to buy: highly-praised, award-winning new benchmark downsized petrol engine which combines all the latest fuel and CO2 saving technologies without too many compromises in performance while proving that size no longer matters.

Against? Living up to the official fuel economy figures in real-life motoring conditions might be a challenge. So the advice from me is: try the 1.0-litre Ecoboost before you buy — you will be impressed because it really does live up to all the 'hype', sorry 'positive reaction', it has already received.

Note, too, that diesel still makes a strong case for itself and the latest 1.6-litre TDCi diesel Focus will work out to be even more fuel efficient for high-mileage drivers, plus there's already a new 83.1mpg/89g/km Econetic 1.6 TDCi diesel Focus on the way. — David Miles