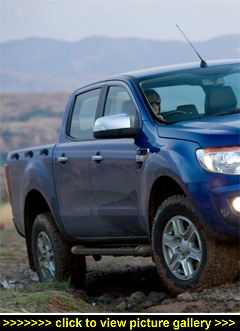 “Ford is usually on top in most of
the many sectors in which the ‘Blue
Oval’ competes. Last year (and like
every year) they had the best-selling
two cars: Fiesta and Focus. Now
Ford is fielding an all-new Ranger
in the increasingly popular lifestyle
pick-up sector...”

THE RANGER LINE-UP is conventional with Regular (Single Cab), Super and Double Cab body styles plus a Chassis Cab option (for bespoke body suppliers). At launch, there's the choice of two high-torque turbodiesel engines both with six-speed manual gearboxes.

And those choices are: a 147bhp 2.2-litre four-cylinder or a 197bhp 3.2-litre five-cylinder. Lifestyle-friendly Double Cab models can also be specified with an extra-cost automatic transmission. Due shortly, but only for two- and four-wheel drive Single Cab models, is a 123bhp 2.2-litre diesel.

Four trim levels — and, like the engines, they are dependent on body style — are XL, XLT, Limited and Wildtrak, with Limited likely to prove the most popular.

Prices, including VAT (pick-ups are classified as commercial vehicles and so incur VAT), start at Ł17,705 and run to Ł29,135. The likely most popular version, the 147bhp 2.2-litre manual Limited Double Cab will cost Ł25,535.

The all-new Ranger retains a ladder frame chassis with rear leaf springs plus dampers for strength and durability, but it also features numerous other 'better-than' functions over its competition (Mitsubishi L200, Toyota HiLux, Nissan Navara and Isuzu Rodeo).

Ford say that in most cases, when the specifications are compared, the Ranger offers better value for money. And if size matters (as it usually does) the Regular Cab has the longest and largest load bay and the biggest payload (1,340kg). The Double Cab boasts the largest payload of any double cab (1,152kg) and all 4WD Rangers have a towing capability of 3,350kg — again, substantially better than the other guys by between 350 and 850kg.

These specs will definitely impress Pick-up Man; but so too will the new Ranger's chunky, muscular, all-action looks. Stylistically, the old Ranger was somewhat 'sit-up-and-beg' — this new one is all thrusting and macho with lots of bright body colour options that are usually associated with Ford's latest car ranges.

Inside the Limited spec Double Cab it's just as impressive — the fascia design and the trim, particularly to the doors and the upholstery, is all very much in keeping with that used in top quality 4x4s and SUVs.

Power windows and door mirrors and AirCon are all standard-fit. Safety is equally impressive: the Ranger Double Cab comes endorsed by a five-star Euro NCAP safety rating — the very first pick-up to score so high.

The Ranger also delivers vastly improved handling, positive steering and ride comfort (even with the 18-inch alloys fitted to the Wildtrak versions). This new Double Cab really does perform very well — it's at least as good as the latest generation Toyota HiLux and the even more impressive VW Amarok.

The 197bhp 3.2-litre five-cylinder turbodiesel unit is huge on torque (346lb ft from 1,500rpm) making it extremely responsive with loads of grunt yet easy on the fuel. 28.3mpg is the official combined cycle figure for the six-speed manual gearbox-equipped 3.2-litre — on test it returned 27.2mpg. Its 249g/km tailpipe emissions are relatively low for a vehicle of this kind and get you a Ł210 annual road tax bill.

The most popular engine — and the one tested here — will be the 147bhp (150PS) four-pot turbodiesel. This too has plenty of torque: 276lb ft from 1,500rpm. Average fuel consumption is officially 32.8mpg — with 30.1mpg recorded on test. Although lower, at 224g/km, CO2 emissions will still cost you the same commercial vehicle annual road tax of Ł210 that you'd pay for the 3.2-litre engine.

As on the 3.2-litre model, the 2.2, riding on 17-inch alloys, served up good ride comfort. The suspension also provides a very compliant ride, coupled with sharp steering and handling.

Thanks to an anti-stall function, the Ranger can also climb steep tracks using just its tick-over engine speed, thereby ensuring safe grip. The hill descent control can be varied for speed using the cruise control function.

Reasons to go for a Ranger include the improvement in all areas, its styling, cabin design and specification, ride comfort, sharp handling and that five-star Euro NCAP safety rating.

Ford's new Ranger models, in particular the Double Cabs, have all the ingredients to succeed in the lifestyle and leisure-cum-workhorse markets and, with pick-ups clearly re-establishing their appeal, the Ranger should soon be climbing close to the top of the UK sales chart. — David Miles