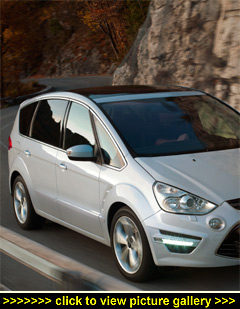 WHILE IN SPAIN he also had the opportunity to try, in the new S-Max, the first application in a larger vehicle of Ford's twin-clutch PowerShift automatic transmission which comes as standard with the new petrol engine and optional on some new diesel units.

The revised S-Max joins the UK market at the end of April with prices yet to be announced. Currently, the S-Max prices start from around Ł21,000 and top-out at over Ł26,000.

Before getting down to the 'nitty-gritty' about engines and transmissions, what is an S-Max? Not an MPV say Ford of Britain, even though it has three rows of seats and carries up to seven people. It is, apparently, an extension of the Mondeo family even though it shares the same platform with the seven-seat Galaxy — which definitely is an MPV. Seating capacity aside, the S-Max is designed to look and feel sporty and be fun to drive.

UK sales of the S-Max last year were 9,373 units (putting it in 8th place in its market segment) with 50% of sales going to private buyers; mainly families. To date, 94% of sales have been for diesel models but the petrol engine share will increase to 10% because of the new high-torque EcoBoost engine which owners should like because petrol as a fuel is cheaper than diesel, petrol engines cost less and so Benefit-in-Kind tax for company car users is less. The automatic transmission share should also increase, from 16 to 25% thanks to the new PowerShift option.

This new technology is aimed at delivering great fuel economy, lower CO2 and the powerful response you would normally expect from a larger displacement power unit. By using a turbocharger with this direct injection petrol engine, torque is a very useful 221lb ft from 1,750rpm and makes it just as responsive and flexible to drive as a similar turbodiesel unit.

Compared with the outgoing 159bhp 2.3-litre petrol unit with automatic transmission, the CO2 of the new 2.0-litre SCTi EcoBoost engine has reduced by 19% to 189g/km even though it has over 25 per cent more power. This translates into an official combined cycle fuel consumption of 34.8mpg.

In operation this unit is exceptionally responsive because of the turbo boost and, being a petrol engine, it is very quiet and vibration free.

Less impressive in the mountains and on the narrow roads of the plains in the Jerez region of Spain was the real life fuel economy — just 24mpg. However, the driving refinement was excellent and, mated with the new PowerShift twin-clutch automatic gearbox (which comes as standard), changes were seamless.

For those high-mileage users who prefer diesel power, the new 2.0-litre Duratorq TDCi (161bhp/221lb ft) unit mated with a six-speed manual transmission has a combined consumption of 49.5mpg and average CO2 emissions of 152g/km. The sub-160g/km CO2 engines create a fiscal advantage of around Ł50 a month for drivers in the 40% tax bracket.

As for the other changes for the new 2010 model year S-Max, it gains from Ford's on-going plan to give all their models a more premium look and feel. The full line-up of specifications will be announced closer to the Spring on-sale date but the range will include Titanium and Titanium X Sport versions and two individual interior styling packs which include full leather trim.

Inside, the S-Max has Ford's 'fold flat' seating system for the second and third rows of seats and high series models will also come with a panoramic sunroof, power blinds, LED interior lighting and a premium sound system plus all UK models will have an electronic handling programme as standard.

Handling remains sharp, precise and agile although the change in damper and spring rates plus the lighter petrol engine makes the ride feel softer — certainly comfortable — although the vehicle seems to now 'float' rather than feel 'nailed' to the road as before.