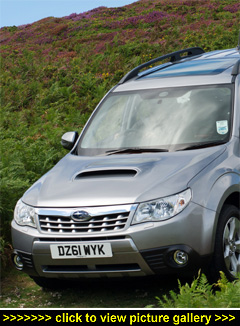 “The 2012 Subaru Forester models
use new cleaner and fuel-frugal
engines, are well equipped, have a
comfortable ride and are good for
country living... Covers most bases
then, doesn’t it?”

IN A SECTOR DOMINATED by the top-selling Nissan Qashqai and bursting at the seams with hot new models such as the Audi Q3, Range Rover Evoque, BMW X1 and Volkswagen Tiguan, the Forester 4x4 SUV/Crossover remains a solid and reliable warhorse in the Subaru stable.

Upright and boxy, the Forester is a roomy five-seater, five-door estate with a high-off-the-ground stance and 4WD. And now, to freshen things up, it's received a few styling tweaks and some significant engine upgrades. Just introduced is an all-new four-cylinder 2.0-litre horizontally-opposed 'Boxer' petrol engine along with, and sharing the same Boxer configuration, a revised 2.0-litre diesel unit.

And neither powerplant makes use of the now common start/stop fuel- and CO2-saving systems — a rather odd omission because the new engines are designed to improve fuel economy and to reduce CO2 levels and running costs.

Forester drivers who prefer filling their tanks with unleaded rather than diesel can choose between two models: 2.0X (Ł21,370) and 2.0XS, (Ł25,370). An automatic transmission is available and adds a Ł1,000 premium.

The new petrol engine's tailpipe emissions are a lower 173g/km and the Combined Cycle fuel economy is also improved: from 32.8mpg to 37.7mpg. During my brief test drive it returned 34.2mpg. These CO2 and mpg improvements have triggered a drop of two road tax groups although it still costs Ł265 for the first year's road tax and then Ł190 each year thereafter. Zero to 62mph acceleration takes 10.7 seconds and the top speed is 115mph.

Drive to all four wheels is via a centre differential and limited slip rear differential using either a five-speed manual gearbox or an extra-cost four-speed torque converter. This Forester also has the useful high/low ratio transfer 'box for off-road work, pulling boats up slipways or reversing caravans uphill. Whatever. It's a real shame the auto option and the transfer 'box are not available for diesel versions — the models that most customers buy. Both petrol and diesel models, incidentally, have a maximum braked towing capacity of 2,000kg.

Now to the 2.0-litre four-cylinder horizontally-opposed turbodiesel unit — this has received minor revisions for the new model year including improved exhaust gas recirculation to clean up the CO2 emissions. The modifications have resulted in a drop from 167 to 158g/km, thereby reducing road tax to Ł165 a year.

Fuel consumption has also been improved: from 44.8mpg to 47.1mpg in the Combined Cycle. Zero to 62mph takes 10.3 seconds; and the maximum speed is 115mph. Again, the diesel model has drive to all four wheels but makes use of a six-speed manual 'box but, as I've already mentioned, there's no transfer box for low ratio work. On test the diesel managed a useful 43.8mpg.

Thanks to a new grille and other styling tweaks, the latest Forester models are noticeably smarter. And the better engines go some way to keeping them competitive on the sales pitch. The ride comfort of these 2012 model year Foresters really is very good and, thanks to the low centre of gravity from the 'flat' horizontally-opposed engine, the body-roll is acceptable for a tall vehicle.

Although I didn't try this latest version off-road, I have in the past — and for relatively light work, 'country' pursuits or parking a caravan in a grass field on family holiday duty, the Forester is an accomplished vehicle. I did however drive both of the latest models on soaking wet roads with lots of slippery leaves, and this is where Subaru's 4x4 system provides sure-footed performance — precisely where you want it, too!

Being a boxy shape, it's roomy enough for five people: with all three rear seats in use there's 450 litres of boot space; fold them down and the load bay expands to 1,610 litres. Overall the Forester is a very versatile people or load carrier — and its 2,000kg braked towing capability is one big reason why it's popular with customers who put function above form. — David Miles