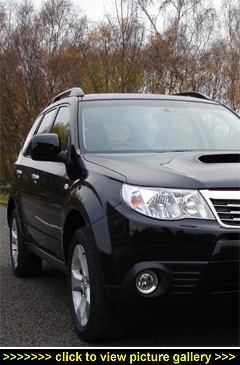 “Subaru’s all-wheel drive Forester
might be a country-dweller at heart
but it’s equally at home in the bright
lights of the big city...”

IN THE RECENT COLD SNAP that brought the UK well and truly to its knees, Snow White flipped from being a fairy story heroine to the real-world's wicked White Snow. What became of the seven dwarves is unclear but they probably managed to clamber aboard a Forester — although a family-oriented five-seater, there's more than enough room for a couple of stowaways…

With permanent all-wheel drive, the Forester's winter appeal is easily justified, although it's not just for those days when Jack Frost is on the prod — it's equally reassuring in the wet, in greasy mud and tackling tricky off-road terrain.

The current third-generation Foresters have long-since shed their early-days boxy looks, and while they may not have fully transformed into beautiful swans, their plumage is now very much more upmarket — all-in-all a well-judged blending of traditional estate car and compact 4x4. The latest Forester's distinctive and neatly sculpted bodywork is punctuated by bold wheel arches and, at the front, 'hawk-eye' headlamps.

Climbing aboard the Forester is easy, thanks to large, wide-opening doors — but not so wide that they restrict exit or entry in car parks. Once inside, a quick tally of the standard kit reveals a comprehensive spec, especially on the range-topping XS NavPlus model reviewed here.

You also get front, front side and curtain airbags, front seats with anti-whiplash head restraints and energy-absorbing backs plus two ISOFIX-compatible child seat mountings in the rear seat. Also standard across the range is Subaru's full-time symmetrical all-wheel drive system, which splits power 50:50 front-to-rear but as soon as slip is detected the centre differential distributes torque to the axle with the most grip. Other take-them-for-granted safety features include electronic stability control and self-levelling rear suspension.

Once seated, first impressions are of an appealing and efficiently laid out cabin; one that's very easy to live with, either as a passenger or driver. Nothing OTT; just a well-considered mix of trim materials with silver-grey metallic highlights to the centre stack, doors and the curvaceous passenger fascia that sweeps down to merge neatly with the centre tunnel. The shapely leather seats, with perforated centre panels, are a nice fit and, another plus point, provide excellent under-knee support.

Also much appreciated is the command driving position. The three-spoke, leather-wrapped, multi-function steering wheel, adjustable for reach and rake, combined with the 8-way powered driver's seat, adds to the overall feel-good factor. Blue-lit dials are embellished with bold bezels; clear white-on-black graphics make them easy to take in at a glance. Usefully, at the press of a switch, the touch-screen SatNav display can be set to any one of four different vertical angles to minimise glare.

Visibility to the front and front sides is excellent; and thanks to the large third side window and deep rear screen, visibility to the rear and rear three-quarters is good enough that you don't have to rely on the rear parking camera if you don't want to. Large door mirrors also do a good job of making life easier on the move.

The creature comforts all work efficiently: in the summer the climate control will chill you quicker than a Frappuccino; in the winter, four-stage heated front seats deliver heat exactly where it's needed. Externally, heated elements at the base of the screen prevent the wipers freezing — only in severe weather do you really appreciate them but then they really are worth their weight in gold. Another well-considered feature for the winter months: the chunky exterior door handles have deep recesses to allow glove-wearers an easier grip.

As well as looking good, the Forester's cabin offers impressive levels of space for all passengers. Those travelling in the back enjoy supportive seats and lots of legroom to really stretch out.

A wide, padded centre armrest along with good recline angles for the backrests guarantees genuine comfort, particularly on long-haul trips. There's also a natty fold-out tray-cum-cupholder that can be used if there's just two bodies in the back.

Even 'taking the fifth' is not the hardship it is in many cars — welcome news if you're the one who always gets squeezed between two larger rear passengers. In the Forester there's more room and less squeeze. Also making journeys more agreeable is the deep glasshouse which makes for a bright and airy cabin and offers passengers a good view out. The extra-large tilt 'n' slide glass sunroof (powered, with one-shot operation) adds to the ambience. And if rays are not really your thing there's a full length sun blind to haze Mr Sun.

Versatile is another Forester trait. The tailgate swings up easily to reveal a large aperture and a family-sized boot: 450 litres, up to the window line. With only two seats taken, press the switches in the boot and the 60:40 split rear seats spring forward unaided to create a flat loadbay capable of holding a lot (1,610 litres) of cargo.

The Forester's rear suspension features self-levelling, which aids stability when laden and ensures a constant ground clearance (215mm on this latest version), so no problems carrying a full load. Beneath the boot floor there's a useful, and private, storage tray along with a real spare wheel — not one of those space-saving 'repair kits' that won't get you mobile if you've damaged a sidewall. Shopping expeditions are made easier (at least as far as bringing it all home goes) thanks to not one, not two, but four heavy-duty bag hooks in the boot.

However, what's installed in the Forester's engine bay will, for many new and returning Subaru customers, be the main draw: Subaru's impressive 'Boxer' diesel engine. Mated to a six-speed manual 'box, the 2.0-litre turbodiesel puts out 145bhp and 258lb ft of torque between 1,800-2,400rpm.

The diesel's character is very similar to that of a petrol engine in that it's smooth and flexible and pulls with gusto; it revs willingly and delivers a broad spread of power that makes it well-suited to towing — something that will be on the agenda for many Forester owners. For the record, it's capable of hauling a braked 2,000kg.

The combination of a good set of ratios in the manual 'box and the strong torque not only makes the all-alloy engine feel mechanically unburstable, but also means you can scale back on the gear changing.

Alternatively, make good use of the revs and hang on to the gears and the Forester will really hustle — good news when overtaking or tackling seriously steep hills fully laden.

It's also surprisingly quiet for a diesel although not so quiet that you can't hear its characterful flat-four heartbeat. And for a turbocharged oil-burner there's minimal lag; prod the accelerator and the engine responds quickly to your right foot: zero to 62mph takes a brisk 10.4 seconds (it feels quicker) and top speed is 116mph.

Motorways, incidentally, are cruised smoothly (70mph calls for a low 2,000rpm in 6th gear) but do keep an eye on the speedo — the Forester's easy gait makes it all to easy to drift past the legal limit.

Officially the 2.0 diesel returns 44.1mpg in the combined cycle (38.2 and 47.9mpg respectively on the urban and extra-urban cycles). Our — as usual — hard-driven week-long test saw a pretty good 42.1mpg overall. Even more impressive, brim the 64-litre tank and you can travel as far as 625 miles before refuelling!

Versatile, practical and with an obliging turbodiesel under the bonnet — but is the Forester entertaining to drive? Unexpectedly, even running 17-inch wheels, the ride is smooth, composed and fuss-free even along the back lanes — the Forester's fully independent suspension is biased towards maximising comfort and it takes a pretty awful road to disturb the passengers.

Brakes are discs all round (ventilated at the front) and are first rate. The electric power-assisted steering is quick, as too is the Forester's response to the helm. For a high-ridin' vehicle there's virtually no body lean and handling remains consistently predictable — thanks to the excellent grip from Subaru's symmetrical full-time all-wheel drive that makes the Forester reassuringly sure-footed whatever the weather throws in its path.

Point its nose off-road and you'll quickly discover why it's popular with country folk — helped by its long-travel, four-wheel independent suspension, the Forester will tackle just about anything from ice and snow to challenging dirt trails. As they say: No Fear.

A practical lifestyle SUV — but happily without the posing — the Forester is a fine all-rounder; one that's roomy enough to comfortably accommodate 'five plus luggage' and that's entertaining to drive. Rugged and well suited to family life and lifestyles, the fact that it's also economical, well-priced and well-equipped makes the Forester Boxer an SUV that's very easy to home. — MotorBar