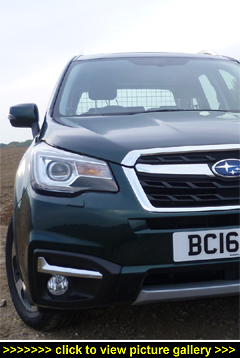 “The clue’s in the name: Forester.
It came on the crossover scene long
before there was a crossover scene.
And now there are more SUVs
than you can shake a stick at, it still
stands out from the crowd...”

FOR MANY OF TODAY'S 'SOFT-ROADIES' an automatic transmission is de rigueur as is diesel power, not just for economy reasons but equally for the superior engine torque it delivers and which is essential when venturing off-road.

The Forester delivers all of the above: first, it comes with a new autobox, a 'Lineartronic' CVT with seven stepped gears; and secondly, there's a four-cylinder turbodiesel unit in the engine bay that kicks out plenty of torque — as well as averaging a real-life 43.1mpg that's impressively close to its official combined cycle figure of 46.3mpg.

And as to that all-important four-wheel drive, it uses Subaru's hallmark Symmetrical All-Wheel Drive technology that will give you all the grip you're ever likely to need. It's got a proper 4x4 system that, unlike many of today's 'Get me out of here, I'm a celebrity' two-wheel drive off-roaders, manages without any trick electronics, and ensures the Forester isn't afraid to embrace the mud.

Looks-wise it's far more individual than many of its rivals — you could say it's 'boxy but all buffed smooth' in the same way as Volvo's big new SUV, the XC90. It's no Prada-panderer, this Forester — starting with its imposing chrome-edged hexagonal grille, wraparound headlights and profiled clamshell-style bonnet, it looks refreshingly characterful and 'can do'.

Like the Volvo, the Forester's 'squared-off' bodystyle pays big dividends on the inside, both for passengers and for load-carrying. Talking of which, the boot is a big, square 505 litres and accessed though a powered tailgate operated via the key, tailgate trigger or from the driver's seat).

Loading even heavy items is no hassle as the floor is perfectly level with the rear bumper lip, and sits just above knee height. Nice touches include easy-release catches at the rear of the boot to fold down the 60:40-split rear seatbacks — doing so converts the boot to full loadbay status with a capacity for 1,592 litres of cargo.

If, however, the back seats are already spoken for by passengers, all is not lost because the Forester will pull a braked 2,000kg. More good news: also fitted is Subaru's Trailer Stability Control that will help prevent any worrying trailer-sway. There's also a sturdy dog-guard that looks tough enough to keep a Baskerville hound in its place.

Useful too is the Memory Height switch on the dash that lets you set the limit to which the electrically-operated tailgate can rise — handy if you're unloading in a garage or other restricted space.

It earns more brownie points for the trouble-free luggage blind with its dedicated storage under the boot floor, the tailored, heavy-duty rubber boot liner, the overspill under-boot storage (four good-sized trays), four bag holders, and a tailgate that opens between the tail lamps so loading/unloading at night is not at all hazardous.

The biggest first impression on opening either front door is the inviting cabin with its shapely, well-padded chocolate brown leather chairs. You'll also like the light streaming in through the large glass sunroof and deep side windows, and the well-laid-out dash with a glossy tablet-like 7-inch touchscreen infotainment system.

Settle in the driver's seat and you'll find yourself surrounded by new, soft-touch materials and high-gloss piano black and metallic trim, all with a quality look and feel.

The main instrumentation is clear white-on-black and complemented by two secondary digital displays: a multifunction trip unit atop the centre stack, and another — that includes the all-important digital speed readout — between the speedo and rev-counter.

The trip display, incidentally, is controlled from the steering wheel and shows everything from the average fuel consumption, range, climate settings, external temperature, iPod tracks, etc, to the status of key vehicle systems such as the all-wheel drive and X-Mode.

The seats are very generously padded with firm but not intrusive bolstering, and are very supportive and comfortable. The driver's seat is power-operated and has two memory settings; both front seats have two-stage heating.

The driving position is spot-on and combined with the deep glasshouse guarantees excellent all-round visibility — including rearwards — enhanced by a great view down the bonnet to both front 'corners'. Head room is plentiful as is foot- and leg-room, and the comfy armrest between the seats doesn't cramp the pull-up handbrake and also height-matches the outer one on the door.

The touchscreen graphics are sharp with easy-use 3D mapping (street names are helpfully 'tagged' with 'speech bubbles' like you see in cartoons for easy identification), and the grippy leather-rimmed wheel houses controls for voice, phone, cruise, speed limiter, etc, plus paddle shifters on the horizontal spokes. All of which makes being behind the Forester's wheel a satisfying place to be.

Thoughtful touches worth mentioning include sun visors that extend to block glare from the usually exposed centre section around the rearview mirror, a particularly comfortable rest for your left foot for those long trips in the cruise, 'clean sill design' doors with a seal along their lower edge to keep them clean and help avoid getting dirt or mud on your trousers, voice operation for just about everything from the phone to your linked-in iPod, and large cupholders big enough to satisfy Jack Reacher.

And if Sounds R U then you'll be pleased to hear that the Forester is well equipped for all current music devices; iPhone, smartphone or other mobile music players.

If you weren't fooled into eBaying your CD collection you'll be glad of the CD player and 6-speaker sound system. There's also hands-free connection and Bluetooth audio plus Subaru's Starlink (controlled via the touchscreen, multifunction steering wheel controls, or one-shot voice recognition) for access to Internet radio, apps, etc.

For the record, Subaru is producing 100 of these Forester Special Edition versions. Based on the XC Premium models they have Ł1,500 of additional equipment at no extra cost, and are finished in striking Hunter Green metallic with brown leather upholstery.

The Forester's rear cabin is an enjoyable place to travel — first of all getting there is easy-peasy, thanks to generous door frames and doors that open to a full 90-degrees. Once aboard there's a full fist of headroom and even with a longshanks doing the driving there's loads of room for feet and knees — leg stretching is definitely on the agenda.

Adjustable backrest angles are another bonus, as too are the comfy armrests: outer ones on the doors and in the middle a wide drop-down armrest with two individual cupholders. The seats are well padded with decent built-in lower back support, headrests slide easily, bottles can be stored in the door bins, and passengers enjoy great views out of the airy cabin.

The 2.0-litre four-cylinder turbodiesel under the Forester's bonnet is one of Subaru's legendary Boxer engines, so called because the pistons in its two pairs of horizontally-opposed cylinders resemble the movement of a boxer's fists.

It puts out 144bhp along with 258lb ft of torque from 1,600rpm, giving it strong pulling power from low down which, together with the fact that it's also quite revvy for an oil-burner, means a more instant surge of 'poke' when your right foot hits the gas.

Work it hard and you'll hear the distinctive Boxer 'thrum' — it sounds good. Top speed is 117mph and 62mph comes up in 9.9 seconds.

The autobox is a Lineartronic CVT (Constantly Variable Transmission) and, thanks to seven pre-set 'gears', it serves up the natural-feeling shifts you'd get with a conventional auto. It all works very fluently, so sit back and let the auto do it for you — or take charge and use the paddle-shifts on the steering wheel for some hands-on ratio- swapping whenever you fancy.

A further benefit or the Boxer engine is that being flatter it can be position lower to reduce the Forester's centre of gravity, contributing to better handling but equally importantly, to safety: more than half of all vehicle fatalities are down to front-end collisions but with the Boxer layout both the engine and drivetrain break away and slide safely under the car in an extreme front-end impact rather than through it. Good to know.

An updated suspension system (with self-levelling at the rear) helps the Forester ride well and maintain comfort even over broken and bumpy blacktop. Also benefiting the easygoing ride are tall-sidewalled 225/60 17-inch Yokohama tyres. Even so, grip levels are high. Body lean is well managed and a new steering gearbox with improved reactions to steering inputs has made the steering is nicely responsive.

Handling is reassuringly tidy, and the Forester is easy to place — so when you find yourself pressing on (which you will) you'll feel safe and in control. A feeling that's underlined by the strong, no-nonsense brakes.

Take it as a given that the Forester is both game and capable in the rough, whether that means off-road or just challenging on-road conditions.

Further boosting the Forester's 4x4 abilities on Lineartronic versions is X-Mode with Hill Descent Control. Press the X-Mode button between 0-13mph (it works up to 25mph) and it modifies the braking, engine, transmission, and all-wheel drive to optimise the Forester's go-anywhere ability.

When progressing over bumpy ground, X-Mode also reduces throttle sensitivity to avoid any 'kangaroo effect'. However, if the system senses you're driving over a ridge or rocks, it allows for more immediate throttle response allowing you to accelerate up and over the obstacle.

And when travelling down steep and slippery hills with X-Mode engaged you can simply steer the Forester down the slope without touching any pedals, leaving X-Mode to micro-manage the hill descent speed using brakes and throttle control.

For many owners the best thing about this Subaru Forester will be that you don't need to be an off-road hero to venture away from the tarmac — just Mr or Mrs Average. Which is exactly how it should be.

The Forester has plenty going for it; top of the list is that in a world of crossover clones it's got individuality and character (and that distinctive Boxer engine soundtrack). It's also robust, practical, comfortably roomy, and has proper four-wheel drive — not surprising then that the Forester is Subaru's best-selling model in the UK. ~ MotorBar