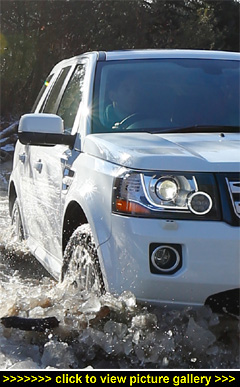 “The Freelander 2, fresh from
its mid-life update (a mild facelift
externally but more significant
improvements on the inside),
is on sale now...”

ALL FREELANDER MODELS use carry-over 2.2-litre four-cylinder turbodiesel engines knocking out either 148 or 187bhp depending on the version and specification. The 2013 Freelander line-up is also extended with new sporty Dynamic and HSE Lux models joining the previous S, GS, XS and HSE choices. 'Black' and 'White' special edition versions will also be added to the range in the near future.

Prices now start at Ł23,700 for the eD4 2WD manual, which is Ł1,000 more than the equivalent outgoing model. Other versions show similar price increases with 4WD manual transmission Freelanders starting at Ł24,500. Prices top out at a very hefty Ł39,805 — this buys you the 187bhp SD4 HSE Lux 4WD six-speed auto; a figure that is now very close to the top prices in the upmarket Range Rover Evoque range.

So what's new about the 'new' 2013 model year Land Rover Freelander mid-sized SUV? From the outside it's not much more than a mid-life refresher: a bit more brightwork with new front and rear LED lights being most notable, together with a bright finish to the grille, fog light bezels and insert bars for the bumpers. New bodywork colours are also available.

Inside though shows a much more adventurous improvement — a very definite move upmarket which follows much of what we have seen in the similarly sized premium Range Rover Evoque.

Most noticeable is the new centre console where the previous mass of switches have gone, now replaced by more ergonomic and easy to use controls. And there is now (by public demand!) a centrally-positioned analogue clock taking the spot previously occupied by the Terrain Response dial, which has in turn been replaced by two switches to scroll through the off-road settings — another Evoque feature.

Also new is the easy to locate Start/Stop Engine push-button, plus the column stalks have been simplified. The handbrake has been superseded by an electronic parking brake which releases automatically once the driver applies the power to pull away. This is enhanced by a two-second-delay hill-start feature that's great for driving off-road. In the hi-fi department (in various states of specification depending on the model chosen) is a new British-produced Meridian surround-sound system. All-in-all, the revised Freelander cabin has the unmistakably modern look and feel of a Range Rover.

As for driving, nothing really has changed. Unfortunately Land Rover only had the top spec Freelanders for the media to try at its UK launch, so the SD4 4WD automatic HSE Lux version — priced at Ł39,805 — was our only choice. A shame because this model is not really representative of what the majority of UK customers really buy as far as specification goes, although it does have all the technical features of the less expensive models.

With most Freelander models having permanent four-wheel drive as standard, it's hugely capable off-road — and much more so than the Evoque because of its high ground clearance and long-travel suspension.

The easy-to-select Terrain Response provides the right choice for driving over rocks, on sand, in deep mud/snow, and for going up and down the steepest of hills easily but safely — all at the push of a button rather than the twist of a knob.

With 187bhp and loads of torque (310lb ft @ 1,750rpm) the engine is strong and responsive both in the rough and on the smooth. Officially this auto unit will return 40.4mpg in the Combined Cycle — my test drive around the country roads of the Herefordshire/Worcestershire borders returned 31.2mpg.

Driving on-road I would prefer to have more feedback from the steering; off-road it was fine, but on-road it was light and vague and the vehicle 'floated' through bends with some body roll. But even with the optional 19-inch road wheels the ride comfort was generally good, the long-travel suspension mopping up the worst potholes. However, on-road the suspension does allow the nose to pitch up and down during acceleration and braking.

Overall, the latest Freelander is not as sharp for road-going performance as many new generation SUVs which are designed mainly for road use. Don't panic — the Freelander has not gone soft and remains a tough, dual-purpose, go-anywhere workhorse at heart despite its upmarket new interior.

Those who use their Freelander to tow, and many do, will also appreciate the new rear-view parking camera that doubles as a tow hitch-assist feature. For the record, the Freelander's maximum braked towing weight is 2,000kg.

Good points include the fresh exterior design tweaks, the hugely improved and now premium interior, comfortable and roomy cabin (with good load space of 755-1,670 litres), plus it remains a highly-capable, tough off-roader with a strong and responsive engine. — David Miles