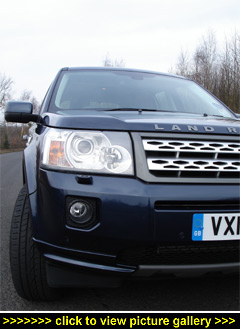 “Damned if you do and damned if
you don’t; that’s just how today’s
car makers must sometimes feel.
First, drivers moan that cars should
be more economical; then, as soon
as they’re more economical, they
moan that they want more power...”

AND IT'S NOT JUST SPORTY LITTLE NUMBERS we're talking about here. 4x4 and SUV owners are no different. But they've not got anything to moan about when it comes to the smarter 'new-look-for-2011' Freelander 2, whose more potent 187bhp turbodiesel engine makes it both quicker and more economical.

Badged SD4, the revised 2.2-litre powerplant is only available with a six-speed tiptronic auto 'box. Stick-shifting stick-in-the-muds will have to settle for less power with the 148bhp version that comes mated to a six-speed manual gearbox.

The diesel-drinking SD4, tested here in top-of-the-range HSE spec, costs Ł36,245. Don't complain about the price because you'd shell out as much for a similar BMW X3 xDrive and however much you pay for the B-M it won't have that Ł70K Range Rover spirit, which the latest Freelander 2 does.

Climb aboard and the Range Rover linkage is as clear as the nose on your face — the fascia and centre stack being the most obvious RR features. HSE models come with leather upholstery but it's not just window dressing — the Freelander's expensive-looking cabin is now notably more upmarket, from the 'feel good' trim materials to the classy dials.

At first glance the centre stack and console are switchgear-busy but all buttons, rotary knobs and switches are large, clearly marked and easy to identify and use. In fact, spend a few minutes before you drive away for the first time and you shouldn't need to dig out the handbook.

Even the three-setting memory for the driver's seat is intuitive. The centre stack is crowned with a foolproof touch-screen colour display that serves the SatNav

The smart, four-spoke, leather-wrapped steering wheel houses remote controls for the audio, 'phone, speed limiter and cruise and, incidentally, adjusts generously for both reach and height. The stylish and extremely 'gettable' horn bars are definitely deserving of a mention in despatches; another thoughtful touch is the stepped S-shaped column stalks that bring them handily up to the 10-to-2 position and within easy reach of your fingertips.

Driver's information is accessed (and cycled through) via the button on the end of the left-hand stalk. Other commendably efficient features include the first rate heating and ventilation as well as the very effective two-stage seat heating. And yet another much-liked feature: the separate audio on/off — unlike many, it's not tied-in to the SatNav and thankfully doesn't come on every time you restart the engine.

Once upon a time the Freelander was more utilitarian than 'yup there' — no longer; this refreshed version, particularly in range-topping HSE guise, is a desirable alternative buy to a similar M-B or B-M.

As to the drivetrain, the 187bhp powerplant and the six-speeder auto 'box is a good pairing. Yes, you know it drinks derv, but once you're rolling that's quickly forgotten, replaced by an appreciation of the strong torque that pulls solidly from low-down.

Adding to the mechanical polish is the quick- and smooth-shifting transmission. Not only does it drive well, but this latest Freelander goes better, too: 0-62mph takes 9.5 seconds and there's a higher 118mph top speed. While it's meaty enough left in Drive, moving the selector lever to the left and into Sport really adds a gratifying edge to the performance. Reassuringly, you always know exactly what gear/mode you're in thanks to the secondary driver's information display in the speedometer. There's also a manual override (called CommandShift) for either rapid acceleration or to maximise engine braking.

Courtesy of its brilliant and completely idiot-proof Terrain Response system (and now even more wieldy thanks to the 187bhp unit's muscular 309lb ft of torque), the Freelander 2 is justifiably highly rated as an out-an-out off-roader — and not just by dyed-in-the-wool Landie-lovers.

While the Freelander never fails to impress in the rough, what really surprises passengers is just how adeptly it rides the blacktop.

It's comfortable, supple and agile. Bumps on lesser roads — even sleeping policemen! — are ironed out while motorway miles are ticked-off without any fuss at all. And note that that's running on 19-inch alloys shod with wide 235 section rubber. Press on and you'll find that body roll is well checked and the steering nicely weighted — and unexpectedly direct for a vehicle designed to tackle the world's worst roads.

Add in a refined cabin ambiance and you have a go-anywhere-at-anytime vehicle that's particularly good for tackling long journeys. And long journeys is where you'll see your best mpg with an official 49.6mpg Extra Urban figure; for the record, Urban is 32.5mpg and Combined 40.4mpg.

Our week-long test average over all sorts of highways and byways was a liveable 30.7mpg — it could easily have been better but we succumbed to the 'eager-beaver' Sport mode for most of our driving. The brakes shave off road speed easily; use them in need and you'll discover them to be as powerful as they are progressive. No worries.

What also impresses is that on road the Freelander feels very car like, with what can genuinely be described as agile handling and roadholding. Push hard through corners and yes, there is some body lean (mostly down to the high ground clearance) but for normal driving it's as stable as needs be. Of course, the usual caveat applies: if you want a hot hatch, buy a hot hatch.

The powered front seats (8-way driver; 6-way passenger), with power lumbar adjustment and adjustable drop-down inner armrests, are comfortably supportive — with enough shape and bolstering to keep you stirred but not shaken if you do take to the rough.

Also on road, the Freelander's 'intelligent' Terrain Response full-time 4WD system ensures high levels of grip — and it couldn't be easier to operate: simply turn the rotary knob to dial up the appropriate setting — General; Grass-Gravel-Snow; Mud-Ruts; Sand — and you're done!

While a lot of SUVs (Audi Q5, Volvo XC60, etc) have taken the softer crossover route style-wise, the Freelander has not betrayed its heritage and is still instantly of the Land Rover clan. Like its sophisticated big bro the Range Rover, the Freelander 2 remains unapologetically proud of its upright bearing, which gives it strong on-road presence.

Thanks to the almost regal squared-off body architecture, the Freelander's cabin provides ample space and practicality; the lofty driving position also affords the driver a panoramic view of the road ahead over the trademark clamshell bonnet — the slim A-pillars are a bonus.

From the driver's seat there's also good awareness of all four corners, making placing the Freelander a piece of cake. There's good room, too, in all seating positions for heads, elbows, knees, legs and feet. Plus more than enough cubbyholes to go round.

The rear cabin is equally spacious and luxurious — two adults can chill out in real comfort on the well-padded rear seat, their lounging territories democratically split by the comfy centre armrest. And if needs must, then three adults will fit well enough. The deep glasshouse ensures a light and airy rear cabin and exit and entry is made easy by wide-opening doors. What more can we say? It's a great place to be driven in.

Neither is parking a problem — sensors are standard although you won't need to rely on them. And just to make life easier, the nearside mirror dips when you engage reverse gear; and a single beep reminds you that you're in reverse.

The tailgate is wide and lifts high, offering unrestricted access to the 755-litre boot; fold down the 60:40 split rear seats — creating a virtually flat load-bay — and this extends to 1,670 litres. The mid-thigh level loading ledge may be a tad high for some but it's always far easier (and kinder to your back!) to lift up rather than lean over when loading or unloading heavy items, so no issues on this point. And, under the boot floor, something you don't see often — a genuine, full-size matching alloy spare wheel!

When it comes to 'make your mind up' time the Freelander 2 has a lot to offer over and above its first class brand image. For many buyers that badge alone will seal the deal. But for those who need more than a badge, there's much to recommend the Freelander, starting with its genuine and highly-rated off-road abilities (it's no exaggeration to say that when the going gets tough the Freelander trumps its rivals) and continuing with a hard-to-fault, practical nature that's well-suited to serving as a family car. And, of course, its undemanding 'drive anywhere, anytime, any weather' driveability. — MotorBar