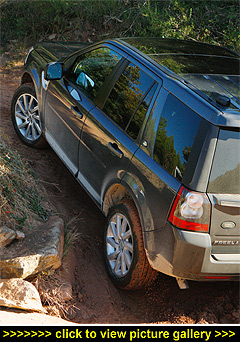 “Land Rover’s 2011 Freelander 2
4x4 model range benefits from a new
2.2-litre diesel powerplant, available
with either 147 or 187bhp, along with
a cabin makeover and fresh exterior
looks...”

THE NEW TURBODIESEL ENGINE is available in the 147bhp four-wheel drive TD4 model featuring a manual 'box and intelligent Stop-Start technology as standard (an automatic without Stop-Start is available as a cost option) or the new automatic-only 187bhp SD4 versions. Prices for Freelander 4x4s start at Ł22,745 and top out at Ł36,245.

This new engine is not only quieter but more efficient too, and both derivatives have 309lb ft — 14lb ft more torque than the outgoing unit. The result: the 2011 Freelander 2 offers improved engine response and more mid-range strength for towing; CO2 emissions have been significantly reduced to 165g/km (185g/km for the 187bhp) with corresponding fuel economy benefits of 45.6mpg and 40.4mpg (187bhp unit).

Happily, the reductions in consumption and emissions has not been at the expense of performance. The flagship 187bhp Freelander SD4 accelerates from rest to 62mph in 9.5 seconds and has an increased top speed, now 118mph. The 147bhp TD4 manual and six-speed automatic versions match the performance of their predecessors, with 0-62mph taking 11.7 seconds and a top speed of 112mph. Also, both versions are now able to run on 10% biodiesel rather than 5%, if that's what the driver wants.

The latest Freelanders continue to be evolutionary models over the ones they replace. For the new model year, the cosmetic changes include a new front bumper assembly incorporating new front fog lamp bezels, a new front grille finish, improved headlamps and tail lights and new 18- or 19-inch alloy wheels.

Inside there are revised instrument dials and four new seat styles with the option of a Premium Pack that includes Windsor Leather upholstery, an electric seat multi-position adjuster along with premium carpet mats and covered centre stowage.

The changes continue to be upgrades so for Freelander enthusiasts there's nothing not to like — except the price. Newcomers to the brand may think the Freelander a bit 'old school' in its layout and not as modern as its competitors — namely Audi's Q5, BMW's X3 and Volvo's XC60. But that hasn't stopped the Freelander 2 being Land Rover's best-selling model, with over 215,000 sold globally since its launch in 2006.

'Old school' or not, my test Freelander — the 187bhp SD4 automatic (the top model in the range) costing Ł36,245 plus the Ł1,225 Premium Pack — puts it into the larger Land Rover Discovery price range; and the 'Disco' is far more imposing and spacious.

It must be said, however, that the five-door Freelander in the compact SUV segment excels for off-road performance. It beats all the competition — and by a large margin — but in truth that isn't where this vehicle mainly sells today.

The farming community's family 4x4 used to be the Freelander but now, because of cost, I see more country folk using Double Cab pick-ups fitted with a load area canopy to do their family duties on- an off-road work and towing trailers or horse boxes. Where I do see more Freelanders is on motorways or ferrying children to school in London. In the rural Cotswolds it's the larger Discovery models and Range Rovers that rule the roost — but not being used as workhorses.

But to get back on track with the latest Freelander. It looks smarter inside and out — a definite step-up in class from previous versions. In fact, it's bordering on being luxurious and the quality of the leather upholstery, trim and carpeting is first rate. Great for 'city slickers' but perhaps over the top for country folk. In the front it's roomy, wide and has loads of headroom although in the rear legroom is limited. Boot space is 755-1,670 litres (compared to the X3's 550-1600) and the braked towing weight is 2,000kg.

Off-road it's unbeatable: just dial in the correct terrain response setting and the computers do the work for you. And having an automatic gearbox is no hindrance; indeed it makes driving even easier in really difficult country conditions as much as it does in the concrete jungle.

The new four-cylinder, common-rail turbodiesel engine is strong, with lots of torque so it never feels short of power, but it is less refined and noisier than the Audi Q5 and BMW X3 units. Fuel economy was not brilliant either — my real-life 30.9mpg was nearly 10mpg less than the official Combined Cycle figure. A recent test in the 4.4-litre V8 diesel Range Rover returned 30.4mpg over exactly the same roads and conditions!

The on-road ride is comfortable but due to its high ground clearance there's a lot of body roll during cornering. In this area, neither can it compete for on-road agility with the new BMW X3. With permanent all-wheel drive, the Freelander's cornering grip is comforting when the road surfaces are wet, icy or covered in mud and snow but when the roads are dry, the X3 does cornering better.

Because the Freelander first saw life in 1997 (with the '2' appearing in 2006) it has evolved by updates to where it is today but in some ways, in terms of interior space and on-road driving refinement, it misses out compared to what its main competitors now offer. There's a feeling that it's past its best and dated in design. Too much body roll and cramped rear legroom don't help its case.

On the other hand it's undeniably a desirable brand. And it's hugely capable off-road, comfortable and has a strong engine and high equipment levels. Even so, for many compact SUV customers the Freelander has just become too expensive to buy and to run. And there are better alternatives. But for others, it is enormously desirable and brilliant off-road. It's a tough choice. — David Miles