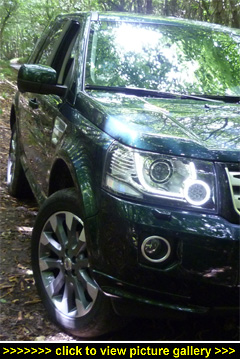 “Mention the name Land Rover and
the very next thing most people think
of is ‘Range Rover’. In fact you now
almost can’t say one without the
other. Great news for Land Rover’s
brand identity, but it makes it easy
to overlook the rest of the Landie
line-up — such as the go-anywhere
Freelander 2...”

IF YOU'RE IN THE MARKET for a persuasively competent off-road 4x4 that's stylish enough to look as though it 'belongs' in any social scenario without being just another accessory for the fashionistas, then look no further than the latest-generation Freelander, designated the '2'.

A star long before the Evoque arrived on the scene and stole the limelight (and there's no denying that a very desirable set of wheels it is too), the Freelander now has 'the look'.

A recent makeover has given Land Rover's Cinderella the clothes she needs to go to the ball, along with a pert upmarket nose that clearly shares some Range Rover DNA. Before the Evoque, the Freelander was often tagged by the media as a 'baby' Land Rover which in a way — at least for those who hadn't driven one — understated its abilities because it's probably the most capable SUV in its class; amazingly competent off-road and very much at home on tarmac.

While new Range Rover prices start at £71K, you won't have to hock the family silver to buy a Freelander. A bargain Ł23K will get you a range-starter Freelander eD4 S with 2WD.

If you're sticking with 4WD, just Ł24K is how much you'll need to park a TD4 S on your driveway. In all there are 23 Freelander versions to choose from, topping out with the Ł39K SD4 HSE Lux, which comes with the more powerful 187bhp 2.2-litre engine (TD4 Freelanders are powered by the same turbodiesel but outputting a less potent 147bhp).

Decision time: TD4 or SD4? If you've got the cash then the SD4 is the one we'd go for. Both generate the same high torque — a muscular 310lb ft at 1,750rpm. Pulling power is crucially important off-road, but as in this case they're the same then the deciding factor has to be the bhp — and the SD4's forty extra horses come in very handy on-road, which is where many Freelanders will will live out their days.

Pull away with some wellie in the SD4 and you can feel the shove of torque working for you from low revs — the benchmark 0-62mph is dealt with in a fuss-free manner (a brisk 9.5 seconds) accompanied by a satisfying bassy power-hum from under the bonnet.

The standard-fit six-speed autobox is a nice one; it shifts smoothly and seems to know exactly the right moment to change up or down and never too early or too late. There's a Sport mode for when you need to press on, and also a CommandShift mode which permits manual changes for both maximising acceleration or, equally useful, strong engine braking either on steep hills or if you're towing.

The Freelander will happily pull a braked 2,000kg and, via the rear-view camera (you also get four front and four rear audible parking sensors), the Hitch Assist shows the position of the tow ball on the infotainment screen along with dynamic guide lines so you can hitch up all by your lonesome. Now that's clever.

Naturally the Freelander has no trouble getting the power down as it comes with permanent four-wheel drive. Even better, it comes with Land Rover's Terrain Response system — simply press the button on the gearlever surround to select the kind of terrain you're driving over and the Terrain Response's electronic wizardry will adapt to it in the blink of an eye.

Choose from: General (for typical road surfaces) | Grass-Gravel-Snow | Mud & Ruts | Sand. Between them they guarantee the Freelander will respond the right way to whatever terrain conditions it encounters, which is why few would argue that the Freelander is still best in class when it comes to off-road performance.

Of course, backing that up is the Freelander's chassis and suspension. Designed to cope with the worst of the worst, it soaks up the roughest off-road terrain in a manner that keeps those on-board amazingly unshaken.

On tarmac this translates to a comfortable and composed ride that despatches potholes and crumbling blacktop so fluently that even the princess in the Hans Christian Andersen fairy tale The Princess and the Pea, who could detect a pea in a bed covered by twenty mattresses and twenty featherbeds, wouldn't complain. Even riding on the 19-inch diamond-turned alloys gracing our HSE Lux, the ride barely suffered.

The handling dynamics are good; the Freelander steers with surprising accuracy (notably so for a sports utility vehicle), it's easy to place accurately on the road courtesy of the commanding driving position that elevates all aboard to eyeball-to-eyeball height with White Van Man (and also lets you see the top corners of both front wings), is always manageable and reassuringly planted at speed, and holds its line reassuringly through the esses. It also has enough poke to take all roads in its loping stride, in particular making light work of long, steep hills.

Should you need to stop hard in a hurry, the brakes are decisive — as we were very pleased to find when a driver using his mobile pulled out from a side turning into our path. As they say; no harm, no foul!

While you're ridin' around would, if you're a passenger, be a good time to take in what the Freelander 2 brings to the party. Big, well-padded, armchair-like seats and plenty of space to lounge in for five real-world adults. The heated front seats are set high off the floor which guarantees good lower leg comfort as well as providing fine views out through the deep glasshouse.

They also feature Captain's-style adjustable drop-down inner armrests, and there are big outer armrests on the doors. The upholstery is fine Windsor leather and under your feet you'll find tailored deep-pile mats. The dash architecture has a symmetry that's elegant, and it's all enhanced by a standard of fit and finish that quite clearly says 'Range Rover'.

From behind the wheel there's lots to like: the vertical horn bars on the four-spoke multifunction leather-wrapped wheel; the heated wheel rim is brilliant — certainly not a gimmick, it's great in the winter and in fact even on long trips at other times when it keeps your fingers and hands flexible during long periods on the wheel (if you've not tried one before, note that it doesn't get hot like a heated seat, just comfortably warm; more like wearing a cosy glove.

Plus you can take for granted a power-adjustable seat with power lumbar adjustment and a three-setting seat memory. The four large air vents in the fascia are well-damped and ensure the hot or cold air you've dialled up on the climate control goes exactly where you want it.

Also welcome is the digital speed readout on the colour 5-inch driver's information screen between the speedometer and rev-counter, which displays the coolant temperature and fuel levels, gear positions and the active Terrain Response mode.

And the on-demand powerfold mirrors are great for letting another vehicle squeeze past down narrow country lanes — they also fold automatically on locking 'n' leaving. The 7-inch colour infotainment touchscreen works fine, as does the SatNav — it's easy to use and you don't need to read the manual before you can operate it.

Those travelling in the light and airy rear passenger compartment get shapely, comfy seats that are about five inches higher than the fronts, with generous headroom (no matter how ramrod straight your back, you'll still get a fist of air between your head and the roof) and decent legroom, plus loads of lounging space helped by a well-padded centre armrest and well-placed outer armrests, and a relaxed backrest angle.

Unusually, the Freelander's middle rear spot is also soft and comfy (in most cars this is, literally, a hard place). But wherever you find yourself sitting, the cabin is a fairly hushed place to be — unless, that is, you're listening to your personal playlist on the impressive Meridian 825W, 17-speaker surround sound system.

The boot is practical, and large even for a four-and-a-half-metre long car — 755 litres. Fold down the 60:40 rear seats and this expands to a voluminous 1,670 litres complete with a large and level loadbay floor, making the Freelander very versatile when it comes to juggling people-carrying duties with load-carrying demands. Another nice feature; thanks to the distinctive LED taillights being mounted on the bodywork and not the tailgate, it's safe to load items at night.

Other essentials, often skipped on other brands, include the matching full-size spare wheel (absolutely essential off-road) stowed beneath the boot floor; and a proper stay to keep the lift-up access panel raised.

In addition to the Terrain Response system, the Freelander has all the off-road attributes you're ever likely to need: a wading depth of 500mm; obstacle clearance of up to 210mm; plus off-road approach and departure angles of 31 and 34 degrees respectively.

And to demonstrate the thoroughness of Land Rover's engineering, the 'intelligent' electric parking brake adjusts brake force according to the slope you've parked on. The system even takes into account whether the brakes are hot or cold. If hot, the system 'wakes up' periodically to ensure clamping force is not lost as the brakes cool down.

And — not many people know this — despite being operated by a single switch, the electric parking brake can still be used as an emergency brake, automatically selecting the most stable braking method by employing skid prevention techniques.

Officially the SD4 drinks diesel fuel in the combined cycle at the rate of 40.4mpg; after 500 hard-driven MotorBar test miles — many of them with our Freelander fully laden — the onboard computer was showing an average of 33.1.

Satisfying to drive and satisfying to own, the Freelander 2 is much like the SAS; give it a mission, and it's 'mission accomplished'. — MotorBar