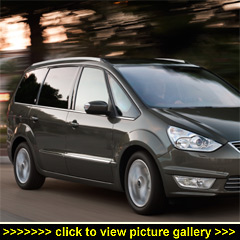 “When it goes on sale in April, the
revised ‘2010’ Ford Galaxy range will
offer a higher class of ride, improved
performance and more comfort...”

THE REVISED FORD GALAXY RANGE goes on sale in the UK in April (2010) but with prices yet to be announced and depending upon the value of the Pound against the Euro.

The refreshed Galaxy will have the option of Ford's new 2.0-litre, 200bhp EcoBoost turbocharged direct injection petrol engine with the new PowerShift six-speed twin-clutch auto gearbox and new 2.0-litre Duratorq 113bhp and 161bhp turbodiesel units with a 138bhp unit to follow. The PowerShift auto box will be available as an option on the standard six-speed manual gearbox for the 138 and 158bhp diesels.

The seven-seat Galaxy achieved 8,005 registrations in the UK last year in the MPV segment which showed a huge 30.2% decline in sales due to customers downsizing to more compact multi-seat vehicles and also because many were sticking with the vehicles they already had. The segment achieved around 94,800 sales according to official figures but the Galaxy remained the best-selling large MPV, outselling its closest rival — the Volkswagen Sharan — by five to one.

Eighty per cent of UK Galaxy sales are to fleet operators — mainly chauffeurs, private hire, taxi/mini-cab operators and for hotel and airport minibus use — and 97% of Galaxy models are diesel powered.

Like its stablemate — the seven-seat, sportier looking and slightly smaller S-Max — the Galaxy has undergone a styling makeover and now has a more shapely bonnet, bolder trapezoidal grille, new look fog lights, silver-coloured roof rails, new LED tail lights and, depending on the version, more chrome detailing on the side mouldings and door handles.

Inside it is more luxurious and there is the Ford 'flat-floor' seating system where the second and third rows of seats individually fold to the floor so passenger or luggage carrying options are high. There is also a new premium sound system, upgraded interior, partial or full leather trim options, a blind spot information light that operates in the door mirrors and an adjustable speed limiter.

During a pre-UK introduction press event in wet and windy southern Spain over mountainous roads, the latest Galaxy with the new 2.0-litre Duratorq TDCi engine (161bhp of power and 251lb ft of torque from 2,000rpm) proved to be an accomplished performer. Bearing in mind this vehicle is used to carry passengers, and because it is popular with business transport operators, it has to be comfortable for the paying public and cost-effective and reliable for the operator.

The latest generation Duratorq diesel engine appeared to be quieter and more refined and with that all important responsiveness and flexibility in traffic. There is reduced injection noise and an improved turbocharger provides faster response. Driven over winding country roads and through towns the test vehicle returned 35.8mpg against the official 49.5mpg figure. With a CO2 rating of 152g/km, road tax is currently Ł150 but goes up to Ł155 in April when the revised Galaxy goes on sale.

Niggles? With all seven seats in use, there's limited luggage space (308 litres) but this does increase to a maximum of 2,325 litres. On the plus side the refreshed Galaxy is comfortable and spacious, has a flexible interior, is well equipped and drives well. All in all, it serves up a higher class of ride, performance and comfort. — David Miles