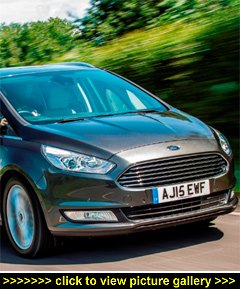 “Ford’s all-new Galaxy people-
carrier arrives in UK showrooms
in August — and when it goes
on sale it will take a 50% bite of
Britain’s large MPV segment...”

WITH THE CHOICE of two petrol engines (1.5 and 2.0-litre EcoBoost units) and four 2.0-litre TDCi turbodiesel units, prices start from Ł26,445 and rise to Ł36,760. There's also, depending on the engine chosen, the choice of Zetec, Titanium and Titanium X trim plus a wide range of options and option packs including the newly-announced front view 180-degree camera system — costing Ł400, it lets you see around corners!

The original (1995) version had the same footprint as a Ford Mondeo and the same is true with the new versions — the latest Galaxy shares the same platform with the latest Mondeo, new S-Max sports MPV (also due to go on sale in August), and the Ford Edge large SUV which too goes on sale later this year.


"'Upgrade to First Class" is the advertising strapline for the new and more luxurious Ford Galaxy and the newcomer is certainly the sleekest, most stylish, most well-equipped, most user-friendly and most fuel and CO2 efficient yet.

At the front is the latest interpretation of the Ford 'face' — flanked by sleek headlights the distinctive trapezoidal grille sits above a full-width lower grille. The A-pillars either side of the huge windscreen retain their twin-spar design, so at times front quarter visibility is impaired but slimmer B- and C-pillars allow for large windows above the raised beltline so offering excellent visibility for passengers.

Although its sleekly elongated high-roof design makes it look thoroughly modern, it is easy to recognise the new model as a Ford Galaxy. At 4.8 metres long, 1.9 metres wide and 1.7 metres high, it's big and imposing and looks every millimetre the thoroughly modern people-carrier it is.

The doors are wide opening to allow easy access to three rows of seats carrying a total of seven passengers. At the back is a tall and wide tailgate allowing equally easy access to a load space ranging from just 300 litres with all seats in use, 1,301 litres in five-seat mode and a huge 2,330 litres with just the two front seats occupied and the five individual rear seats folded down to provide a flat bumper-level load floor.

Whether it is moving the family, chauffeuring business passengers, or driven by active individuals who want to carry their sports kit inside a vehicle rather than loaded on the roof, the new Galaxy is cavernous with a capital 'C'.

And if all that load space isn't enough and you need to tow a boat, caravan or trailer, the petrol-fuelled Galaxy models will pull 1,800kg braked (2,000kg braked for diesel-powered models).

Further improvements to ride quality and passenger comfort includes the use of more sound deadening and insulation materials giving the latest Galaxy a 'premium' ambience. The most notable improvement is from the rear link suspension which delivers a smoother, more compliant, and quieter ride. Gone are the van-like driving characteristics and in has come car-like ride comfort with sharper handling.

The higher levels of standard kit and the use of driving aid technologies are also impressive — again, a carry-over from what Ford are supplying with their passenger cars.

For the first media test driving programme at Goodwood only the 177bhp 2.0-litre TDCi turbodiesel was available. This will be the second most popular choice of customers with 20% of UK buyers expected to choose this unit against the 58% who will instead go for the cheaper 147bhp 2.0-litre TDCi. All engines, petrol and diesel, have Auto-Stop-Start fitted as standard.

The most popular 147bhp oil-burning unit with a six-speed manual gearbox has a top speed of 121mph, does zero to 62mph in 10.9 seconds with an official Combined Cycle economy figure of 56.5mpg and CO2 emissions of 129g/km.

By comparison the manual six-speed, 177bhp 2.0-litre TDCi we drove has a top speed of 129mph, does 0-62mph in 9.8 seconds with 56.5mpg and emissions of 129g/km. This means road tax will cost Ł0 for the first year and then Ł110 for the second year onwards. Price-wise the 147bhp unit costs Ł800 less to buy than the 177bhp unit. However, whilst the 147bhp unit is available with all three levels of specification, the 177bhp engine is not available for the most popular — and cheaper — Zetec versions.

Another important comparison for driving response is the torque output: the 147bhp unit produces 258lb ft from 2,000rpm; the 177bhp unit develops 295lb ft also from 2,000rpm. Just that extra 'grunt' makes a difference to the flexibility and response, particularly if the vehicle is loaded.

To maximise fuel economy and lower emissions fifth and sixth gear ratios lean towards being 'long-legged' and I found driving on busy rural and winding country roads around the Goodwood area needed a significant amount of changing down from sixth to fifth or even fourth to keep the Galaxy moving along in an effortless manner.

The 177bhp car is also a little quicker for acceleration. For the sake of the extra money I'd certainly opt for the 177bhp TDCi unit over the 147bhp but as already noted to do so means moving up from the popular Zetec spec to Titanium. For the record, using mainly country roads my short-ish test drive returned a real-life 42.9mpg — significantly less than the official 56.5mpg.

Overall the new Galaxy is a huge improvement in every way over the last generation but it faces strong sales competition from Ford's own new S-Max in a market sector that is declining in overall sales in favour of large SUVs.

And, as you might expect because of new engine technology, added equipment and the much more stylish body, prices have increased — but not prohibitively so. Around Ł700 is the increase for the least expensive version with an extra Ł1,700 being charged for the best-selling 147bhp 2.0-litre Zetec version over the previous 138bhp Zetec model. That said, you really do get 'more bangs for your bucks'. — David Miles