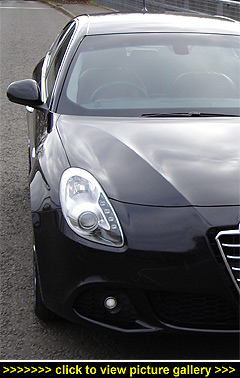 “Ever wondered about that red-
tongued, green snake on the Alfa
shield? For me it represents the
serpent from the Garden of Eden.
Think about it; no hot-blooded man
is going to go for an apple, even
a big shiny red one. But a classy-
looking Italian called Giulietta, now
that’s temptation...”

AND A CLASSY LOOKER the new Giulietta surely is. Starting with a front-end carrying that symbolic cross-and-snake, shield-shaped grille, the lines flow along heavily sculpted flanks before neatly wrapping up the coupe styling around the Giulietta's pert tail. At first glance it's easy to miss the rear doors, so subtly are they integrated into the profile but look close and you'll spot their artfully disguised handles in the trailing upper corner of the window frames.

Given that it will compete for sales against the likes of VW's Golf and Ford's all-new Focus, it seems a sure-fire winner on looks alone. Despite giving the distinct impression of being a three-door coupe, the Giulietta is a real-world five-door hatch — as such, it offers a strong measure of practicality within its willowy body.

In fact, for such a striking lady the Giulietta is surprisingly cheap, especially the 170bhp 2.0-litre JTDm turbodiesel tested here in Lusso spec and which costs an almost disappointingly reasonable Ł21,650 — something this sexy should surely cost more!

Our 2.0-litre turbodiesel proved to be powerful, lively and smooth all the way to its 4,500rpm red-line; a firm prod on the accelerator never failing to produce a real shove from its 170bhp and 236lb ft (on tap from 1,500rpm and rising to 258lb ft at 1,750rpm in 'overboost'). Enough to power the Giulietta to a top speed of close to double the legal limit (at 135mph) and romp to the benchmark 62mph from standstill in 8 seconds dead. In fact, it's deceivingly quick — you don't need much of a straight at all to see 80mph on the speedo, even powering uphill. In normal driving this equates to effortless performance on all kinds of roads, allied to excellent economy.

Officially, and helped by fuel-saving Start&Stop technology, the 2.0 JTDm will return a gosh-factor 68.9mpg in the extra-urban cycle, 48.7 in the urban cycle and 60.1mpg combined. During our week-long test we recorded a very acceptable average consumption of 47.9mpg.

All this talk of sexy looks, power, torque and near-50mpg real-world compression ignition (sorry, diesel) economy and we haven't even mentioned the cockpit. Ordinary cars have interiors; Alfas have 'cockpits'.

On opening a front door, the cabin's most striking feature is the full-width fascia with a metallic insert strip — ours was the standard Magnesio Grey but it can be had in a number of colours including brushed Aluminium, Ghiaccio White and Alfa Red (solid or metallic). Other finishes are available as extra-cost options and can be paired with matching gear knobs. Red leather upholstery ratcheted up the cabin ambience on our Lusso test car. It's also roomier inside than its coupe glasshouse suggests, with a good fist of headroom in the front.

The speedo and rev-counter follow the Alfa tradition of individual dials in deep hooded binnacles — and it keeps them reflection-free. White on black, they're at their sharpest when the Giulietta's bright-white LED daytime running lights are switched on, and are helpfully calibrated in 5mph increments for roads where speed cameras still reign.

Pilots will also appreciate the well-padded and well-bolstered seats with ribbed and perforated centre panels. Seat bases are longer than average and provide good under-knee support. Generous height and reach adjustment of the wheel along with a seat height adjuster contribute to a comfortable driving position.

Built-in lumbar support is fairly strong; if you want electric lumbar adjustment it will cost you another Ł160. There's no left footrest but the footwell is comfortable enough and, besides, how many sporting drivers use cruise control? A clue as to what this Alfa is all about is the rev-counter — its figures are three times larger than those on the speedometer. Need we say more?

On the practical side, there are ample cubbyholes for oddments including a chilled glovebox fitted with a rack for three cans (or small bottles) along with centre console cup-holders and a useful lidded bin on the fascia where the SatNav would go if you paid the extra Ł1,230. There's also a small storage section in the padded drop-down centre armrest. If you have kids, the seat belt reminder warning above the auto-dimming rear-view mirror will came in handy. Throw in efficient dual-zone heating and cooling and sitting in the front of the Giulietta is somewhere you'd be happy spending a lot of your time.

And sitting in the back is no hardship, either. Unlike some sporty coupe-styled five-door hatchbacks, the Giulietta's rear seats serve up decent room and comfort — and so long as you're under 5' 11", rear headroom isn't compromised by the sloping roof although taller drivers will find they could do with a tad more under-thigh support. Helped by a wide padded centre rear armrest (with pop-out cup-holders and built-in storage tray) and lots of foot room, four near-six-footers can travel together without problems.

Adding to the relaxed ambience is the Giulietta's quiet and refined demeanour at speed; enough to shrink the longest journeys. And good news for driver visibility — all three rear headrests slide down low over the seatbacks when not in use.

With the split/fold 60:40 back seats in use, the regular-shaped 350-litre boot is equipped with a bag hook, power socket and recesses to store bottles — if that's what you want to stash there. Plus, there's a load-through hatch. The seatbacks fold but the resulting load floor is not fully flat — if you regularly need more cargo room there's always Alfa's own 159 Sportwagon.

More to the point, how does she go? Alfas are traditionally about three things: performance, handling and ride. The first surprise is that the diesel unit doesn't weight-up the front-end to the detriment of the handling or ride quality, which is impressively supple, soaking up the bumps and up there with the class leaders.

The new chassis features MacPherson struts up front and an aluminium multilink independent rear suspension (Turismo and Lusso models have softer spring and damper settings than the more sporty Veloce and Cloverleaf versions).

Which brings us to the Giulietta's DNA. The switchable DNA multi-mode drive system (first seen on the MiTo) allows the driver to choose between Dynamic, Normal and All-weather handling modes — three distinct programmes that alter damper and differential settings, throttle response, steering effort and modify the intervention threshold for the VDC (Alfa's electronic stability control), all on the fly. Most of the time it's fine left in Normal, where you'll enjoy smooth, well-composed but still entertaining progress with a good balance between comfort and control. When you need a shot of adrenaline, flick the DNA switch just ahead of the short gear lever to Dynamic.

Many an otherwise competent sports car is let down by its steering. Not so the Giulietta. It's quick and direct and steers crisply via an electrically-assisted rack. There's a noticeable step-up in engine response in Dynamic; mark the extra aggression down to the additional 22lb ft of torque on tap at 1,750rpm in 'overboost'. However, the combination of an agile chassis, well controlled body roll and keen steering means the Giulietta tracks satisfyingly through bends in any of the three driving modes — and when you up the tempo, the grip keeps pace. Plus the lady has a stubborn determination, once committed, to stick to her line.

The Giulietta puts her power down through the front wheels but thanks to the standard-fit Q2 electronic differential there's an impressive amount of traction. All of which, underscored by a six-speed gearbox with a swift and accurate change action and strong brakes — albeit a tad sharp at city speeds until you're used to them — makes this temptress engaging company on testing B-roads. Forget all those pointless surveys that tell you which celeb is the 'most desirable passenger' — the only company you really need answers to the name 'Giulietta'!

This is an easy one to sum up. Not only does the glam Giulietta drive well but it's also a serious contender for your money against its rivals. For a family car it's a breath of fresh air, with a nicely-judged balance between sportiness and comfort that will have you driving more miles than you need to because you'll want to. Tempted? — MotorBar