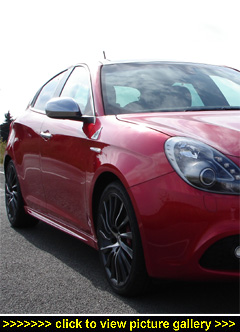 “The Cloverleaf Giulietta, leader of
the Alfa pack, packs a powerful
235bhp turbo punch. But is the racy-
looking five-door from the fashion
capital of the world a hot hatch —
or a Grand Tourer?”

THE INITIAL FEELING, based on its looks, is that it's more GT than hot hatch. Mark that down to the sense of occasion put out by its sporty coupe-esque styling (cleverly concealed rear door handles in the window frames easily fool the eye, giving the five-door body a three-door look). Striking anthracite-finish 18-inch alloys and red brake callipers add to the air of polished aggression generated by swoopy lines, a sculpted bonnet and 'floating' Alfa shield grille.

However, while the Cloverleaf easily outguns the world's favourite hot hatch — the 207bhp Golf GTI — in the power stakes, the key to the 'GT or HH?' question lies in the Cloverleaf's 'DNA'. Alfa owners will already be familiar with this driver-selectable dynamics system that electronically alters the steering, brakes, throttle and engine responses at the flick of a switch.

Alfa's DNA offers the driver a three-way choice between All-Weather, Normal and Dynamic modes. Even without knowing how they individually affect the Giulietta's dynamics mix, it's Dynamic that you'd instinctively want to select. A good choice.

Switch to Dynamic from the default Normal and the Cloverleaf reveals its most lascivious side: throttle response sharpens dramatically; steering weighting firms up; the brakes, courtesy of a 'Pre-Fill' function, are more immediate and bite harder; and Alfa's ESP system (VDC) becomes less intrusive, taking a step back from its normal intervention point.

Dynamic is the mode you engage when you wish to enjoy max power and a big dose of spirited driving. And when you do, the 235bhp powerplant is a very willing collaborator.

The smooth-revving, direct-injection turbo serves up substantial torque — 251lb ft at 1,900rpm — that gives the four-pot engine sparkling midrange urge and a devilish 'drive me harder' character. Unleashed, its like a kid let out of school early — whooping and burbling with pleasure. And as the speed rises so too does the sporty exhaust note and growly mechanical soundtrack.

In Dynamic mode the Cloverleaf is rapid, with 0-62mph coming up in 6.8 seconds — enough to kick dust in the grilles of most hot hatches. No wonder heart and head scream at you to leave this range-topping Giulietta in Dynamic all the time.

Acceleration aside, the Cloverleaf feels reassuringly stable. Cloverleaf models benefit from a firmer suspension, with a 10mm lower ride height — the sportier chassis provides a well-considered balance between wieldy handling and ride quality. Despite rolling on 18-inch alloys wrapped in 'rubber band' 225/40 Pirellis, it rides well and absorbs bumps, remaining compliant even on poorer road surfaces.

Pressing on along twisty roads the Cloverleaf shows tight body control that, in sync with sharp steering, allows satisfyingly rapid cross-country progress, cleaving through bends and unflinchingly holding its line. ESP and a standard-fit electronic Q2 differential help keep everything shipshape and, despite 235bhp going through the front wheels, keep the Alfa shield pointing where the driver intended.

Just as importantly, good pedal feel makes the powerful Brembo brakes easy to modulate. Tying engine and chassis together harmoniously is a six-speed manual 'box with a well defined gate — it's easily traversed with short, fast shifts that match the smoothly delivered power.

It may not be a dyed-in-the-wool hot hatch even though it's performance could definitely be classed as 'hot hatch', but its fuel consumption would certainly appeal to many hot hatch owners.

You could ask — and a number already have — why not simplify matters by making Dynamic mode standard and doing away with the others? A fair question.

However, when you're fulfilling your family duties and the kids or grandparents are riding with you, Normal mode lets you drive in a more socially acceptable manner.

In Normal, the steering is lighter and, compared to Dynamic, the performance muzzled (torque drops to 221lb ft at 4,500rpm), making the Cloverleaf perfectly suited to pootling around town and stop-start traffic — and more economical. All-Weather does exactly what it says: makes the 235bhp, front-wheel driven Cloverleaf sane and safe when the weather conditions turn the roads slippery.

Driving pleasure aside, the cabin is as classy as the Cloverleaf's eye-catching exterior. For a start it's pleasantly airy — with not one but two sun roofs; the front one power tilts and slides. Front seats are lightly ribbed with unobtrusive but effective side bolstering and good built-in lumbar support. Trimmed in leather, both have height adjustment. Backrest adjustment is by a smooth-action knurled knob rather than a stepped lever so you can get the angle just right.

Thigh and under-knee support is also very good. There's no left foot rest but there's ample room under the Alfa-branded, polished alloy clutch pedal — none of our road-testers complained so it must be okay! Together with lots of height and reach adjustment for the three-spoke multifunction steering wheel (with a good-to-grip, not-too-thick rim), a fine driving position can be quickly set. Visibility to the front is unhindered and even to the back although reversing you'll be well-served relying on the parking sensors.

The uncluttered fascia is enhanced by a 'dragged' metal-effect panel (dramatically finished in dark indigo) and is pointedly driver-focused. Throughout, there's a palpable air of Italian flair and you only have to look at the cabin to know that it will be a great place in which to travel. On motorways, where good pickup in sixth minimises gear changing, the Cloverleaf cruises with quiet refinement.

Individual touches include a slim bank of tap-on/tap-off rocker switches (fogs, central locking) and a 160mph speedo marked to show 0mph at six o'clock and 100mph at twelve o'clock; not everyone liked the 20mph 'jumps' on the speedometer's calibration, especially as 30mph can't easily be checked in a fleeting glance. Also much appreciated is the cooled glovebox with a drinks rack: it holds one 50cl bottle and two cans.

The cabin will amply accommodate five; helped by a decent backrest angle, a brace of near six-footers can be accommodated in the back so long as they lounge and don't sit up perfectly straight — the back seat is set three inches higher than those in front.

Passengers travelling in the back can share a wide, well-padded centre armrest (that doubles as a load-through hatch) along with a good degree of privacy thanks to the darkened glass and tapering rear windows.

Press the Alfa badge on the tailgate and it opens to access a 350-litre boot. A rigid rear parcel shelf lifts with the tailgate; it also stows away neatly on the boot floor if needs be. Adding to the Giulietta's five-door practicality is a 60:40 split/fold rear seat — while you don't get a totally flat load floor, it comes in more than useful for occasional load-lugging.

A week behind the wheel answered the question posed at the beginning: take it from us, the 1750 TBi Cloverleaf is more GT than hot hatch. So if you're in the market for a stylish, comfortable and refined family hatch that's refreshingly different and that also has the power to engage and entertain, the Cloverleaf should be high on your list. — MotorBar