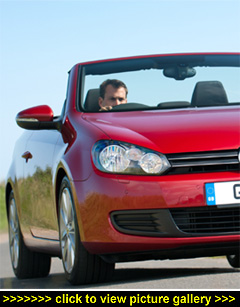 “At last, after nine long years, you
can once more buy a Golf Cabriolet.
Prices range from Ł20,720 to Ł26,595
and for that you get a three-door
Golf with an electrically-operated
folding canvas roof...”

VOLKSWAGEN IS ONE OF THE WORLD'S MOST SUCCESSFUL producers of convertibles, with sales to date of 1.42 million — of which 684,000 were soft-top Golfs sold between 1979 and 2002.

And there will be more engine choices later this year when three more powerplants join the line-up: 120bhp 1.4 and 208bhp 2.0 TSI petrol units along with a 138bhp 2.0-litre TDI turbodiesel.

TDI diesel versions wear VW's BlueMotion Technology badges meaning they are the most fuel frugal with lower CO2 emissions. Depending upon demand, next year (2012) a 207bhp 2.0 TSI petrol unit could become available; this version is likely to be badged GTi.

Forty-seven millimetres longer than the Golf Hatchback on which it is based, the 4.25-metre-long Golf Cabriolet has the same 2,578mm wheelbase so although it is a two-door convertible there's enough rear space and legroom for two adults — but access to the rear seats does require some suppleness and agility.

The Golf's soft-top folds up or down in 9.5 seconds, at speeds up to 18mph if required.
And unlike most folding roof coupe-cabriolets and convertibles, its three-layered and well-insulated canvas folding roof doesn't intrude into the boot.

In the down position it sits flat but visible in a recess above the boot and behind the rear seats. Not having the roof concealed or with an outer covering when folded does leave the side operating arms visible and it looks a bit unfinished.

From the front the new Cabriolet is clearly identifiable as a Golf — the grille and bonnet make sure of that; however, from the heavily-raked windscreen back, it's all new, giving a sportier appearance. New lights plus a deep crease in the boot lid are distinctive design features at the back.

What isn't visible are all the under-the-skin differences necessary in changing the hatchback to a drop-top — modifications to ensure that safety, comfort and refinement were not compromised in the cabriolet version. These include reinforced window frames and structural mods to the underbody, side panels, cross-members, and doors to give the new Cabriolet an extremely high level of torsional rigidity.

Very few family cars move from their initial hatchback design to being a convertible or coupe-cabriolet without compromises in handling, rigidity, ride comfort and reduced boot space.

In most of these areas the Golf Cabriolet scores full marks — only the smaller boot capacity (250 litres) and the narrow opening offered by the boot lid are compromises. However, the 50:50 split/fold rear seat can provide more load space when required.

The Golf Cabriolet's handling and compliant suspension are just the same as on the hatchback models. There's no perceivable body shake or shimmy with the roof down (or up for that matter), so the torsional rigidity engineering solutions have definitely worked and the suspension really does a good job in absorbing most potholes. And it's fair to say that this soft-top Golf inherits the near perfectly balanced handling of its tin-top stablemates. It's no sports car, but it does the job intended.

The electro-hydraulic roof operation is fast and smooth. And while there's some wind-rush noise with the hood up, wind intrusion into the car with the rear deflector in place is minimal. Another plus: the canvas top can be operated at low speeds should a shower come along — remember this is Britain, and it's has just had its coolest and dullest Summer since 1993.

Talking of time-honoured sales, in the past the most popular engine choice for the Golf Cabriolet has been the 138bhp 2.0-litre TDI turbodiesel: and before the end of the year it returns in this latest drop-top Golf.

But what with people downsizing their engines to save on tax and running costs and never-ending rises in fuel prices, VW has seen (from advance orders) a move towards smaller engines. Low mileage users will happily go for the 120bhp 1.4 TSI petrol engine due later this year and priced at around Ł23,000. Higher mileage drivers and those looking for a bit more engine flexibility will also likely downsize from the 2.0-litre TDI to the joint-best selling version, the Ł23,245 103bhp turbodiesel 1.6 TDI.

This is the model I tried. Although no ball-of-fire, it's more than adequate for today's traffic congested roads and cost-conscious motorists. With 184lb ft of torque available from just 1,500rpm, it's responsive from low speeds and copes easily with maximum motorway cruising speeds in a fuel efficient manner.

Top speed is 117mph and it takes 12.1 seconds to go from zero to 62mph; not fast, but fast enough. The official Combined Cycle fuel consumption figure is 64.2mpg and my test drive, taking in most types of roads and considerable stop-start town traffic, saw 52mpg.

This unit is mated to a five-speed manual gearbox but perhaps a six-speeder would be better to reduce the engine revs at motorway cruising speeds and improve fuel economy ever further.

Tailpipe emissions are 117g/km so zero costs for the First Year road tax charge, and then only Ł30 per annum for the second year onwards. For company car users this also means a low 13% Benefit-in-Kind tax and the insurance rating, considering soft-topped convertibles generally rate highly due to the reduced security of a canvas roof, is a reasonable 18E.

Against? Relatively expensive, solid rather than spirited engine performance, bland interior, agility needed for rear seat access, and exposed roof arms when in the lowered position.

On the plus side, it's refined, capable, well engineered, desirable, and easy to live with. As usual with a Golf, the new two-door, four-seater Cabriolet is a thoroughly well engineered product and if going topless is the choice, it's more than fit for purpose. — David Miles